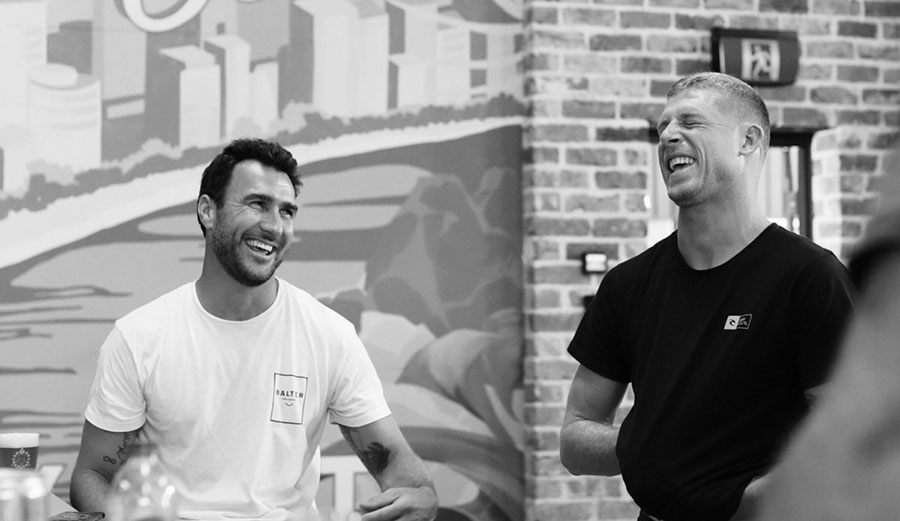 Mick Fanning and Joel Parkinson, laughing all the way to the bank. Photo: Balter Brewery

Back in 2016, Mick Fanning, Joel Parkinson, Bede Durbidge, and Josh Kerr decided they’d do something fun: make beer. Along for the ride was Stirling Howland, (the man behind successful Billabong campaigns like “I surf because…” and “Life’s better in boardshorts”) and Ant McDonald, who became the acting CEO. And now, after a wildly successful few years, Balter Brewery has cashed in the chips for a hefty sum. Carlton & United Breweries (CUB) acquired the beer. CUB is a certifiable beer company giant, with beers like Corona, Stella Artois, Victoria Bitter, Strongbow, and even Budweiser under their umbrella.

The owners made the announcement via a lengthy post on Instagram. “G’day to our Balter community,” they wrote. “Today is a massive day. We’re rapt to say we’ve just finalised a deal to become a part of the Carlton & United Breweries family.”

Of course, anytime a beloved beer is bought by an enormous company, the general drinking public is worried that things will go downhill. Balter, however, addressed that worry. “The sale means a lot of things (and doesn’t mean some others), so we wanted you to hear it straight from the brewer’s mouth,” the continued. “⁣Firstly, the beer will stay the same. Scotty will remain head brewer, in charge of every drop that makes its way into your mouths. The rest of the staff – from brew team to marketing to warehouse legends to the entire gang who run the show, are all staying too. It’s business as usual, but with undoubtable backing, access to over a century of brewing knowledge and even more availability for you guys.”

Balter’s growth since 2016 was shocking. Last year, just two years after opening the gates, the company sold somewhere in the neighborhood of 4 million beers — impressive in any market, but especially so in Australia, where the beer market is competitive, to say the least.

While the exact payout hasn’t been released, The Sydney Morning Herald said that “sources close to the deal, which was announced on Thursday, said it included a five-year ‘earn out’ agreement which, depending on whether certain sales numbers were met, could value the business at between $150 million and $200 million.”

The buyout means that Balter will be able to rapidly expand all over Australia, which is exactly what CUB plans on doing. “They are not doing too much wrong, as you could imagine,” CUB boss Peter Filipovic told The Sydney Morning Herald. “What we can do is give the Balter business the national scale, footprint, great customer relationships, as well as sharing brewing expertise both locally and internationally, for Balter to be able to realize their ambitions even earlier than what they would have been able to do as a standalone operation. We’ll take Balter to all of Australia over the next year, we’ll expand the Currumbin Brewery, to enable them to produce 20 million liters.”

Back when Balter was first announced, I got a hold of Bede Durbidge to ask him a few questions and beg for a few tins, which I did not receive. I asked him what their long term goal was, and his answer was telling: “We just want to make great beer and create a brand that connects with people. We’d love to see our beer putting smiles on people’s faces all across Australia. Maybe one day across the world.”

As it turns out, they’ve accomplished that goal — well, the Australia part, anyway.

Editor’s Note: For more information about the sale and an interview with questions like “CUB make bland, mass-market beer. Aren’t you afraid they’re going to stuff this up?” and “You guys are the definition of sell-outs. How does this sit with you?” click on over to the Balter website.