A Look Back at One of the Best Events In All of Surfing: The Perfect Chapter 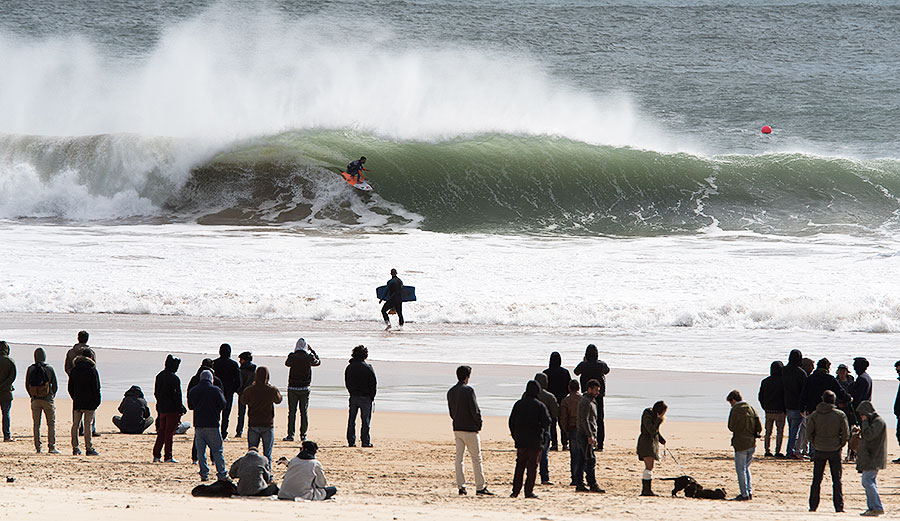 On the best day of the Portuguese winter, at one of the best waves in Portugal, there is an event called the Perfect Chapter. Like all the best surf contests, it focusses on the tube ride, and when the conditions line up at Carcavelos, a suburban beach break, there’s no other place quite like it. It’s unlike any other event, and what sets it apart is that the surfers who compete in it are chosen by the fans. This year’s event includes the likes of Clay Marzo, Bruno Santos, Nic Von Rupp, Pedro Scooby, Balaram Stack, and more.

This year will be the seventh annual Capitulo Perfeito, and although there were a few days when conditions were almost there during the first waiting period, it didn’t get quite good enough. Instead of simply calling it off, however, organizers decided that they’d extend the window, sit back, and wait for Mother Nature to provide what everyone wants: perfect barrels.

“We have a commitment to the fans, where we only give the go-ahead for the contest when we can guarantee a proper show,” said Rui Costa, the organizer of the event. “We have the best tube riders in the world in the Perfect Chapter, guys who can go out and get 10-point rides in conditions that are practically impossible for the average surfer, so we’ll wait for a day that can put them to the test.”

Since it’s just around the corner, we thought it would be a good time to take a look back at the previous years, with a little explanatory help from Rui Costa, the man in charge of the machinery running behind The Perfect Chapter.

“Three years after the first edition of the WCT in Peniche, surfing in Portugal had already become a phenomenon,” Costa explained. In 2012, we had the first edition of the Perfect Chapter. Until then Portugal had only ‘traditional’ surfing contests: CT and QS stops, and the national league. Peniche was the country’s main surfing area, so in addition to the CT event, the first Perfect Chapter was held there, too. Tiago Pires, the first Portuguese surfer on the CT, was the winner. With only Portuguese surfers competing, Tiago won in the final against Ivo Cação, a local from Figueira da Foz. It was the only time that the final took place in the ‘man on man’ format. Tiago scored 16.75 against Ivo’s 11.75. Vasco Ribeiro, who in the quarter-finals scored 18 points, got the best score of the whole contest.

In 2013, the Perfect Chapter was held at Supertubos Beach in Peniche again. “It was the first win for Nic Von Rupp, who would go on to win the contest more times,” Costa remembered. “The Perfect Chapter also changed its format to four-man heats of four surfers, with a losers’ round after the initial round. In the final, Nic Von Rupp’s 13 points were enough to leave Marlon Lipke, former WCT competitor, in second place, with Francisco Alves in third. Ivo Cação, runner-up of the previous event, didn’t find the best waves in the final and finished fourth.”

In 2014, the Perfect Chapter switched to Carcavelos for the first time. The 2019/2020 event will run there. The beach in suburban Lisbon is considered the cradle of surfing in Portugal, and it has hosted some of the first contests in the country. “It is the home of many top Portuguese surfers,” Costa said. “The wave is similar to Supertubos: a heavy, barreling beach break. On the day of the Perfect Chapter, the surfers were greeted with heaving barrels of almost 10 feet, accompanied by the north wind, offshore for Carcavelos on that beach.”

Nic Von Rupp, who would win the contest, started strong with a score of 16.5 in the first round. Filipe Jervis, who scored a total of 17 points in the third round, was another early standout.
In the final, Nic won by a quarter of a point over Ruben Gonzalez, a National Champion several times over in Portugal. Von Rupp scored 10.50 against Ruben’s 10.25. Marlon Lipke repeated his appearance in the final, but it was a hard road to get there: the day before, he left from Australia and traveled 30 hours straight to be in the Perfect Chapter. António Silva, now a Nazaré and slab specialist, finished fourth.

In 2015, the Perfect Chapter opened its doors to foreign surfers. With the quality of the wave and the event in general, it made sense. “The goal was to increase the level of surfing,” Costa explained, “bring the best tube riders in the world to Portugal, and show the world the quality and perfection of Portuguese waves.”

That year, there were three surfers: Brazilians Ricardo dos Santos and Pedro Scooby, and the former CT competitor Cory Lopez. But just before the event started, tragedy struck: Ricardo dos Santos, one of the most respected and well-loved Brazilian surfers in the world, was murdered on January 20. The community was shattered by the news. You’ll remember that competitors are chosen by the fans, and Ricardo was at the top of their list. He was replaced by Bruno Santos, the first alternate of the international surfers, who would have made Ricardo proud. “Bruno Santos gave his opponents no chance, scoring 18.65 points, leaving Nic Von Rupp second with 13.25 points,” Costa said. “Tiago Pires and Ruben Gonzalez were third and fourth respectively. Bruno dedicated the victory to Ricardo, in a moment of great emotion in Carcavelos Beach and for all those who followed the event.”

The event that year also gave rise to a documentary called “O Capítulo de Todos os Santos.” It was shown in film festivals around the world and won multiple awards including Best Documentary.

In 2016, the Perfect Chapter picked up and moved from Carcavelos to Praia do Norté, in Nazaré. It is a very different scene there, one far removed from the relative urban bustle of Carcavelos. While people knew about the massive waves that broke at Nazaré, what wasn’t quite so well-known at the time was just how good the normal-sized ones were, too.

That year also was the year that the event increased its ranks. Eight foreign surfers were on the list, including Bruno Santos, Pedro Scooby, Balaram Stack, and Dylan Graves. It was a standout year. Held in November, it ran in 10-foot barreling conditions. Aritz Aranburu locked down the highest score of the event, a 19.50, on his way to a win.

For the first time, the Perfect Chapter decided to extend the waiting period to cover the northern, hemisphere winter. It went down again at Nazaré, and while conditions weren’t quite as perfect as the previous year, they were still absolutely incredible. There is a very obvious benefit to a longer waiting period, and it shows in the Perfect Chapter. “Although slightly smaller than in the previous year,” Costa said, “the waves were still perfect at Praia do Norte.”

It was the first year that standout rookie Lucas Chumbo took part, and he was fresh off a win at the Nazaré Challenge. Although he — and everyone else for that matter – put up a good fight, he was no match for Willaim Aliotti, a last-minute entrant into the contest.

Keep an eye out for the call, because the window for the event closes on March 15. Keep up to date on Instagram and on the website.