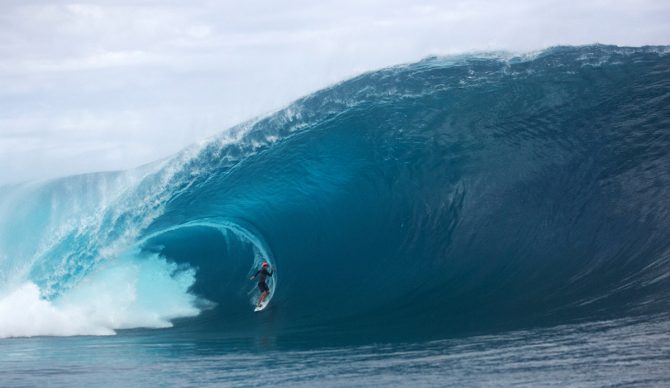 Kauli Vaast at Teahupo’o. Is this what Olympic surfing could look like in 2024? Photo: Romuald Pliquet

It may be a solid 10,000 miles from every other Olympic event during the 2024 Games in Paris, but the idea’s actually crazy enough to be kind of brilliant. French Polynesia’s President Edouard Fritch has tossed out the suggestion that Tahiti be chosen as the site of Olympic surfing competition when France hosts the summer games.

This obviously translates to one very intriguing possibility: Teahupo’o. It’s one of the wildest waves on the planet, and while the three other French mainland proposals are all clearly far more convenient — Biarritz, Lacanau, and La Torche — none of those sites would upstage its actual competitors like the monstrous left could.

The idea came less than two weeks after Paris 2024 President Tony Estanguet squashed any hopes of a surf contest taking place in a wave pool. “We are very lucky to have several natural sites that can be used in France,” Estanguet told press during an official International Olympic Committee visit to Paris.

Included in the pros column for Tahiti is the fact that the WSL already holds competition there annually, meaning the infrastructure is already there to host an Olympic-sized event.

“Every time the Olympics happen they seem to make all these new things and the Olympics leave town and the structure is used but maybe a little bit disused,” Ian Portingale, head coach of the Fiji Surfing Association, said.

If it all sounds like a far-fetched idea this early in the game, the Agence France-Presse said an unnamed source close to the bidding process assured the Tahiti proposal “is being taken seriously. To have events overseas would send a strong signal,” they said.