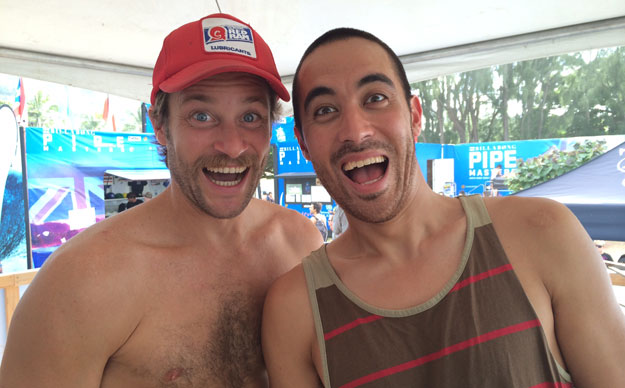 We are Al and Ted.

Hi. We’re Al and Ted. We’ve decided to cover the Billabong Pipeline Masters on Oahu’s North Shore.  After a conversation on how to cover the contest, we decided to wander around and take pictures of things that aren’t waves. We’ll let the professionals do that. We’ll take photos of cock chasing, James Franco, and the newest Triple Crown champion, Ted. 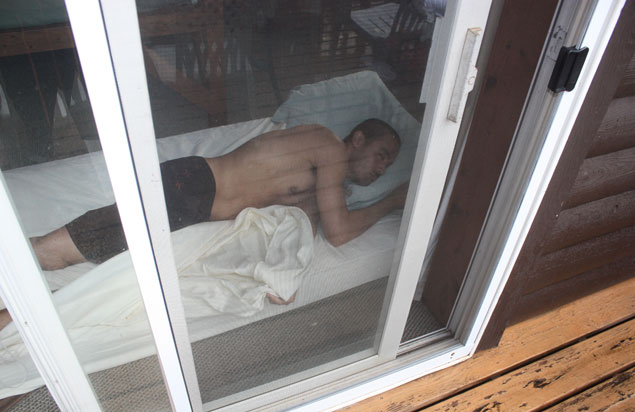 This is sleepy Ted.

Alex: This is Ted at 6 am. He looked unhappy that I woke him up to go surfing. To his credit, though, he got up and came and looked at Rocky Rights with me. It wasn’t that it was too big to go out, it was that heaving, double overhead Rocky Rights is kind of for pansies, not courageous hellmen like us.  So we came back to the house and Ted sat on the couch staring into space while I spooned with a beautiful Golden Retriever on the porch. 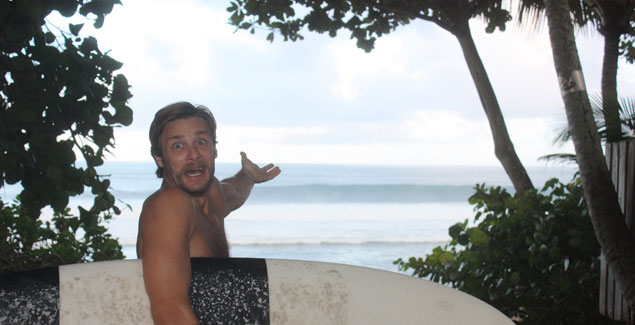 Ted: This is Al trying to explain why he woke me up at 6 this morning saying that the waves at Rocky Point looked small and fun. I dragged myself up, grabbed my board and followed him down to the beach. This is Al looking embarrassed because the waves were mostly gigantic closeouts. We watched a couple of people get hideously cleaned up, I cursed Alex, and we walked back to the house. The wave in the picture behind Al looks small, but I swear, it was at least 60 feet Hawaiian style. 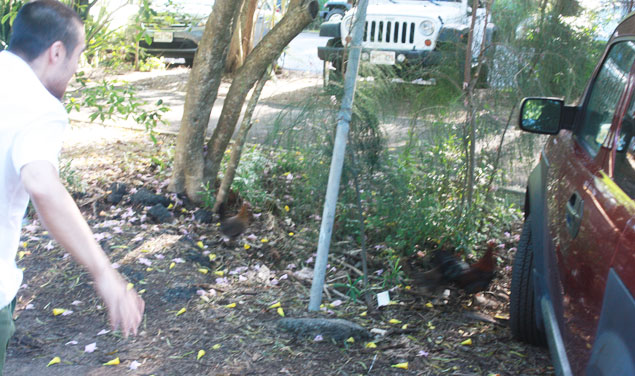 Alex: This is Ted trying to catch a rooster. He says the cocks on the North Shore are imported from different times zones, because they crow all night, which is probably untrue. Importing cocks seems like a waste of taxpayer’s money. He wanted to catch this one, but it proved too fast for him. Either he is a slow runner or this rooster is a fast one. Neither of us have enough cock chasing experience to tell which. “Why don’t these cocks SLEEP!?” he said. 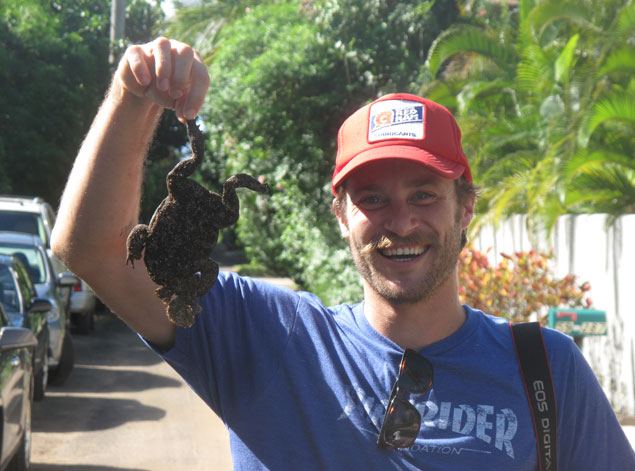 Ted: This is a dead frog. Al will happily touch almost anything. I watched him cuddle a syphilitic dog for a half hour after we didn’t surf this morning because the waves were too big, not because we were scared. This is his new pet. 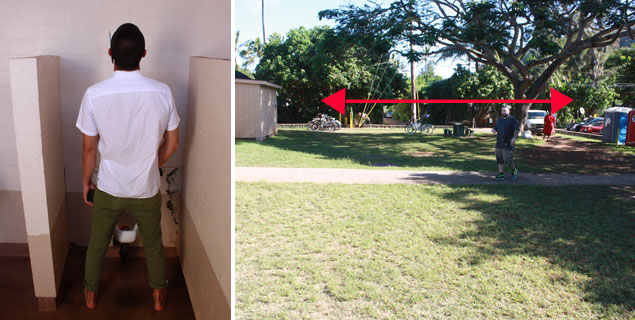 This is a clean urinal.

Alex: This is a clean bathroom. On day one, I was horrified by the state of the outhouse. It was a vile mess of things I don’t like, piled on top of each other in what is, to my knowledge, the most disgusting thing in the universe to date. On day two, Ted found a very clean, sparkling urinal roughly 50 yards away from the outhouse. I didn’t have to pee. 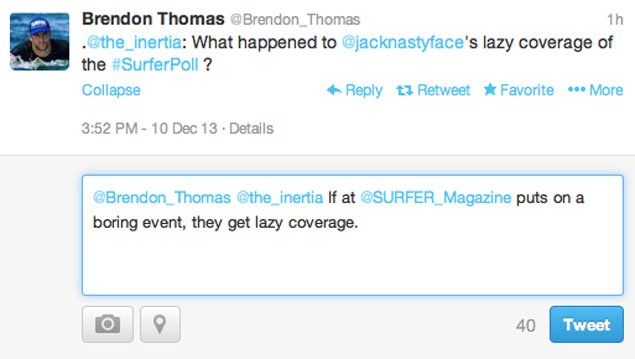 Ted: This is Brendon Thomas, the editor-in-chief of Surfer magazine, calling my work “lazy” today. You should see what he considers exhaustive, hard-hitting journalism. 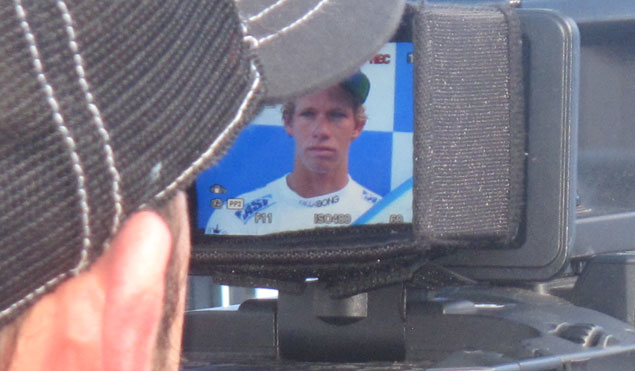 John John Florence. Not very close to us.

Ted: This is the closest I got to John John Florence. He’s pretty dreamy. 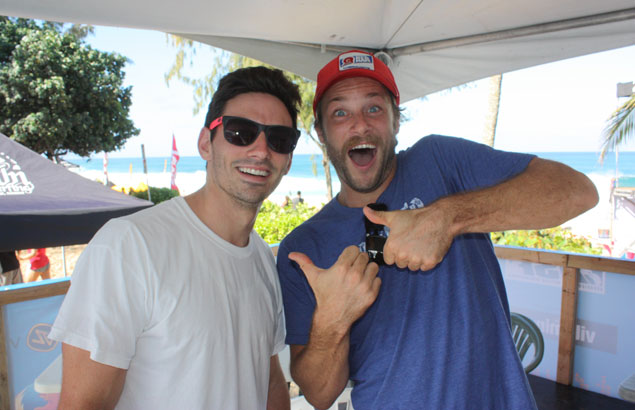 Me and Franco are buddies. I call him J-Franc.

Alex: I met James Franco! It’s weird that he’s an intern for the Triple Crown. I thought he was doing the acting thing. Also, he wasn’t super stoned, which threw me for a loop and led me to believe I may have been duped. 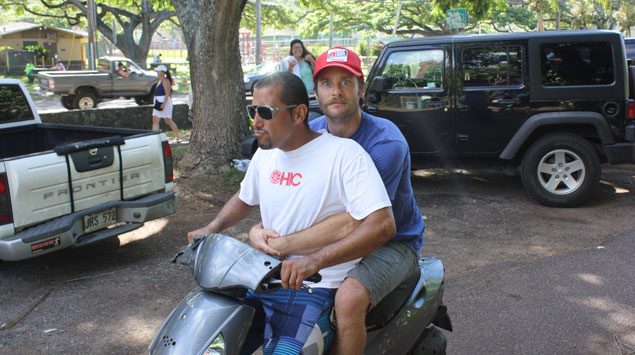 Rides for pretty women and friendly guys. Thank you, Sergio.

Ted: This is Sergio. He likes to offer rides to pretty girls and friendly guys. Al never refuses a ride on a scooter. 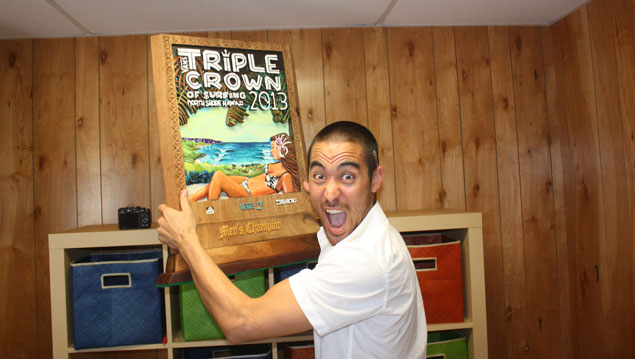 Alex: And then Ted won the Triple Crown.

Have a look at Day 1 for all the important stuff you missed.