All-Time: How an Imperfect Day Led to a Startlingly Beautiful Image 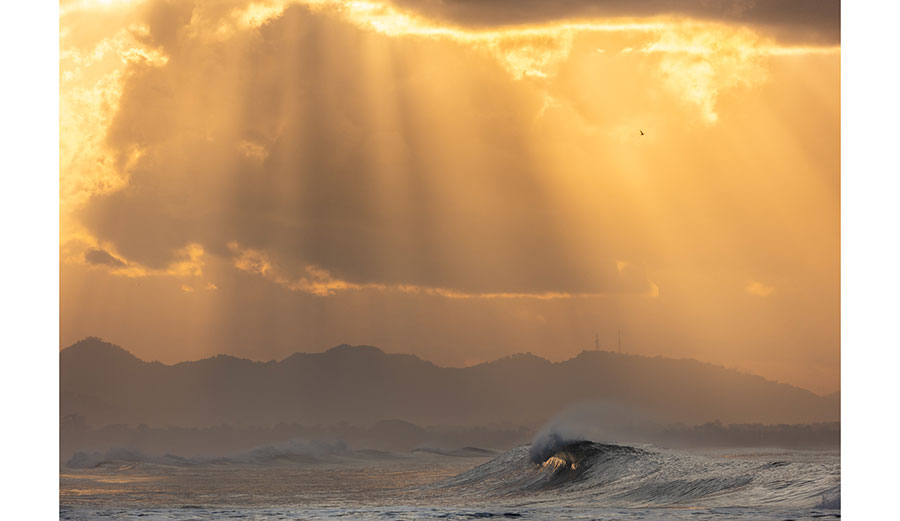 Scott Harrison is a photographer from Australia. He’s photographed his home break there pretty often, and he’s able to find different angles and compositions for his photos. But when you get somewhere new, it’s pretty common to end up taking a photo that’s already been taken a million times before. When he arrived at Keramas a few months ago, he decided that he wouldn’t fall into that trap.

“It’s very easy to get captivated by the wave and just shoot it from front-on from the surfers’ warung,” he said. “It’s such an aesthetically pleasing wave breaking so close to shore.”

The villa that he’s staying at is just a quick jaunt from Keramas, so he spends most mornings walking the stretch of sand, shooting the multiple breaks along the way.

“From this walk,” he explained, “I consistently saw this angle with the landscape in the background and the sun rising behind this view rather than to the side if I were shooting front-on.”

Depending on the season, many of the days there are clear and sunny, so shooting from this angle can be a little difficult to take without the sun causing problems.

“This angle gets blown out pretty quickly,” Harrison said, “but this morning when I arrived the clouds were perfectly filtering the sun to give more time to shoot this angle and wait for a nice peak to occur.”

The waves that day, however, weren’t serving up the typical mechanical perfection Keramas is known for. This meant that Harrison had to work out the composition of the photo, then sit and wait for a wave that resembled what he had in his mind for the photo. He shot many waves that rolled through, but none of them quite measured up.

“Then all of a sudden the sun rose to the height where all these beams started raining down on the backdrop,” he told us. “Almost immediately this wave broke farther north of the main break and had just enough peak to catch the light on the face.”

See more from Scott Harrison on Instagram and check out his Guide to Surf and Wave Photography here.