All-Time: How Even Just One Frame Makes It ‘All So Worth It’ 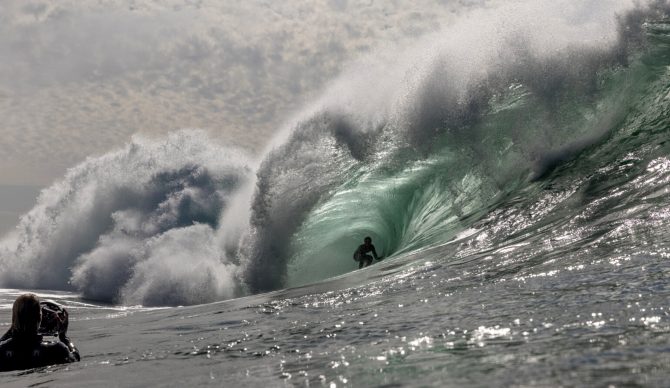 Photographers are a hard working and disciplined bunch. They leave surfboards in the beds of their trucks when conditions are best, gearing up with a tripod or water housing instead. They wait patiently on the beach or in the lineup not just for waves to come in, but for somebody to do something incredible with them. And hopefully, if everything lines up just right, they’ll capture it for us.

Southern California photographer Mike Goodman’s favorite image captures that same spirit: Tosh Tudor under one of those villainous lips that throws itself into the flats farther than the wave is tall, and a mountain of whitewash behind him that resembles a backcountry avalanche. If it weren’t for all the neoprene in the frame you’d almost think this was a view from the shoulder at Cloudbreak, but no, it’s a wave Goodman’s spent years familiarizing himself with close to home.

“The angle of him on the wave, the angle of where I’m at shooting, it’s just incredible,” he says, describing why the above moment has stuck with him the past few months. And while Goodman has seen all-time days like this one in early 2021, his appreciation of the image doesn’t just come from how impressive the wave is, or the chance encounter with the world-class athlete riding it. Goodman’s most fulfilled by what the image represents to him.

“Swimming until my sunblock washes off and getting sunburnt. Not always getting a bunch of good shots but then getting that one, it’s like, ‘Man, it’s all so worth it.’”

Amen to that, brother.

Editor’s note: The All-Time series showcases images that stop us in our tracks, from sessions we’d all like to have experienced. Only on rare occasions do nature’s infinite variables align. It’s even more unusual that photos capture the essence of that moment. If you’re sitting on an image (or two) from surf or snow that you think fits the description above and you’d like to be featured, shoot your photo with a few sentences about the day to contribute@theinertia.com