Three of the boards in question. How, exactly, does this level of damage occur? Photos: Thompson

If you’ve traveled on an airplane with surfboards more than say, twice, it’s likely you’ve found a ding or two when you get to your destination. It’s a common story, and it’s not one that’s only common to Average Joe traveler. Bob Hurley and Kelly Slater famously took Hawaiian Airlines to task, calling board bag fees a “default profit racket.” Kanoa Igarashi opened his board bag to find every last one snapped in half. American Airlines completely demolished Alex Gray’s surfboards. The level of damage airlines can do to surfboards can make one wonder what, exactly, is going on in the dark recesses of airports. The saving grace for pro surfers, however, is that they’re not short on surfboards. For Average Joe traveler, finding a whole quiver wrecked is a disaster. Such was the case for Greg Thompson, who recently unzipped his bag to find his quiver so broken it appears it went through a wood chipper.

Thompson, who is from Durban, South Africa, flew to California pre-COVID. The plan was a good one: to help sail a boat down to Mexico and do some surfing while he was there. “I figured I’d be surfing down in Mex come the south swell season,” he explained. “It sounded perfect, so I spent a decent chunk of change getting some good boards.”

Then, of course, COVID began its global sweep. “Everything started going crazy about a week after that,” he told me, “and most places like South Africa are still not accepting any international flights yet.”

So plans changed. Thompson decided to head to the Caribbean to do some sailing and hopefully get some waves through hurricane season. He was flying out of John Wayne Airport in Orange County, on his way to the Caribbean with a short stop-over in Miami. When he unzipped his board bag in Miami, however, it quickly became apparent that he wouldn’t be surfing, at least not on any of the boards in it. All five and the bag were demolished — not just a few dings on the rails, but completely and utterly smashed.

“I couldn’t really figure out how the fuck my boards were damaged so badly,” Thompson said. “It looks like somebody took a hatchet and went to town taking out all of their anger, or some kind of heavy machinery closed on them or something. All I know is you can’t just do that kind of damage by accident. They’re fucked and I want answers. That’s not your normal wear and tear of travel.”

Thompson did what one does in a situation like that: he filed a claim to get paid out for the damage the airline should be responsible for. “Customer service was very apologetic at the airport,” he said. “These guys were pretty shocked as to how badly they were damaged. I did everything I needed to do. A claim was filed there and then and all I had to do was prove the value of all my equipment.” 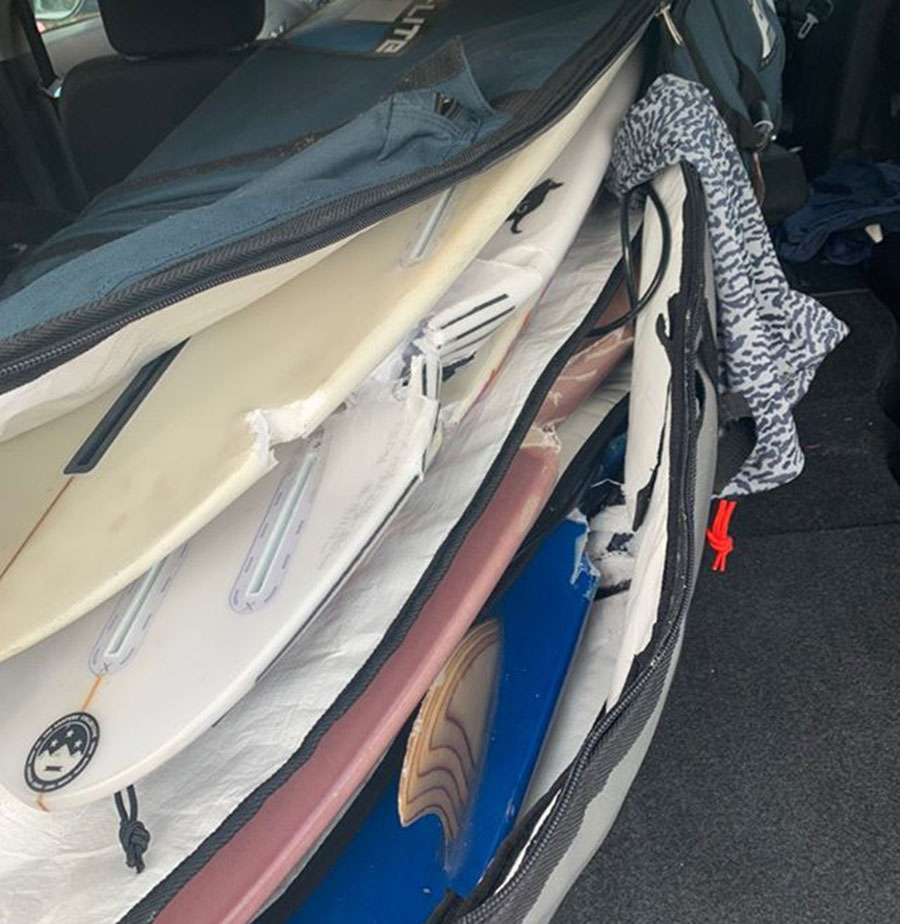 Imagine opening your board bag to this. And then imagine the airline says they don’t have to pay up. Photo: Thompson

To prove the value of the boards and the bag, Thompson went to Nomad Surfshop in Boynton Beach, Florida. The owner and operator of the shop was appalled. “With our family and staff manufacturing surfboards over the years, we would say these boards are unfixable and will never perform the same,” he wrote in a letter to American Airlines. “We value the cost of the five boards and the travel bag to be $3,000-$4,000 USD.”

Thompson was initially told that he would be paid out for the damages, which would be capped at $3500, American Airlines’ limit for domestic flights. Then things went sideways again. “After following up with American’s baggage claims department over the phone and email,” he said, “they very sternly told me there’s nothing I could do because their fine print states they’re not liable for damages if your equipment isn’t in a hard-shelled case.”

In the liability section of American Airlines’ special items page, it says that the airline is only responsible for damages if sports items are in a hard-sided case and if the outside of the case is visibly damaged. That, however, doesn’t mean it’s right. Most surfers, aside from the few who’ve dropped a couple of hundred dollars on a Santa Monica Surfcase, don’t have a hard-shell. Fine print shouldn’t be an excuse for immoral business practices. Since American Airlines already charges $150 simply to fly with surfboards, one would assume that they might, just might, take some level of responsibility. But nope, they don’t.

“I struggle to believe even a hard-shell case would have stopped whatever it was that crushed my boards,” Thompson said.

Thompson’s struggle to make things right is slowly picking up steam. KookoftheDay, an Instagram account with some 876,000 followers, shared it, prompting a handful of pro surfers (and way more than a handful of Average Joe travelers) to respond. “RIP,” wrote Malia Ward. “I’m never flying American again… that’s so whack.” Josh Kerr, a man who has done his fair share of surf travel, called the damage “one of the worst I’ve seen.” Taylor Knox weighed in, too. “That’s so heavy,” he wrote. “Come on @americanair!”

Now, Thompson has started a crowdfunding campaign with a goal of $4,166, the estimated value of the damages incurred. He’s decided to send the proceeds to Surfers Not Street Children, an organization that empowers ex-street children and children at risk of street connectedness through surfing and mentorship.

“Surfers Not Street Children is a charity based in my home town, Durban,” Thompson said. “I grew up watching less fortunate street kids from the age of like six surf my local who have the gnarliest stories. These kids come from a very hard environment, orphaned from a young age, and everything that comes with growing up on the streets. They get fostered by this amazing group of people who teach them life skills through surfing while homeschooling them. Surfing is their outlet away from drugs, prostitution, crime, etc…They’re so good at surfing and it’s super rad to see. The money goes to food, schooling, and surf equipment.”

For his part, Thompson is hoping for a few outcomes, all of which he shouldn’t have to hope for. “I’m hoping they pay me out to be straight,” he said. “I’m also hoping they look into their baggage handling etiquette. I’ve received loads of messages from people who’ve had similar experiences with American, some successful and some not so much. The general story seems to be to not give up, so yeah I’m blowing them up on social media. The general consensus is that we’re all tired of uncomfortably sitting on a plane praying the entire flight we’ll be able to surf on the other side.”