An Ode to Dick Brewer: How One Man Shaped Surfboards That Shaped Surfing 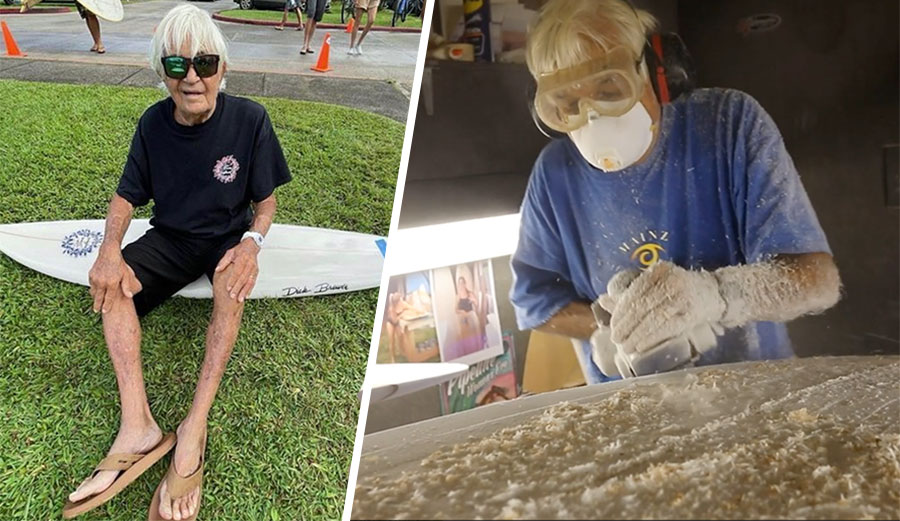 Dick Brewer changed surfing, and for that, we thank him. Photos: Dick Brewer Surfboards/ Doug Walker

Dick Brewer was an icon. He’s been called “surfing’s most influential board maker.” He didn’t just shape surfboards — he shaped an entire culture and industry. His surfboards largely paved the roads that led surfing to where it is today. He was still shaping surfboards almost until he passed, not out of necessity, but out of passion. “Of all the things I’ve done with my life,” he said, “being able to influence surfing is a marvelous thing.”

Richard “Dick” Brewer was born on October 13, 1936, in Bemidji, Minnesota. It was an unlikely birthplace for a man who would become one of the most influential people in all of surfing, but he had something in his blood that, when paired with an eventual love for riding waves, would lead to wild innovations. Brewer’s family were Quakers, and both his father and grandfather were engineers. In 1939, when the second World War was ramping up, Brewer’s father, Charles, packed the family up and moved to California. They moved into a house in Long Beach, and Brewer’s passion for the ocean began to sprout.

Within a few years, they moved inland to Compton, but Brewer’s thoughts remained on the ocean. They then moved to Whittier where Dick joined a water polo team. He began designing U-control model airplanes, in which a model plane is attached to a pair of lines that control the pitch and axis of the planes. He had a knack for design and an understanding of how air flowed over a wing, something that undoubtedly helped when he began shaping surfboards. After few more years, when he was 16, he started working on high-performance boats and dragsters. He was, by all accounts extraordinarily proficient with his hands.

In 1952, seven years after the war ended, Dick began to surf. His first surfboard was a beat up Velzy-shaped craft that he cut his teeth on and he was hooked immediately. A few years later, he got a custom shape, a nine-foot Woody Brown template.

“It’d be a semi-gun today — light balsa with a single layer of glass,” he told Drew Kampion for a Surfer’s Journal profile. “That board was lighter than my friend’s Hobie foam board. I rode it for two years, up until I left for Hawaii. I rode everything in California on that same board — Lunada Bay, big Cottons Point, Windansea, Ventura overhead — so I knew you could ride a 15-foot wave on a nine-foot board.”

He went on to college at Long Beach State, where he surfed as much as he could — generally in the mornings before classes, since he spent his days in the classroom and his nights working as a toolmaker. He excelled in everything he put his mind to: President of the Alpha Sigma Kai fraternity and the Association of Men’s Students at Compton J.C., then a Men’s Senator at Long Beach State. He had plans to join the National Guard, but after he was told he was to head off to basic training when school started, he had a change of heart. And he wanted to shape surfboards.

The first one he made was traced from a friend’s board. He bought a blank, a Walker, and carved out a 9’10”. Then, in 1959, he took his first trip to Hawaii. It changed the trajectory of his life, and with it, the trajectory of surfing. After that trip, he headed home to Long Beach and ended up on Dewey Weber’s surf team. One year later, before he finished school, he packed his things and moved to Hawaii. It was 1960.

He ended up in Waikiki, near Ala Moana. With an 8’6″, he learned about that famous Hawaiian juice and eventually asked Donald Takayama to make him a board that was nearly 10 feet long. He wanted it for the North Shore, and as soon as he showed up on the scene, it was apparent that he had a little something extra. He surfed Waimea and Sunset with all the biggest names at the time — Greg Noll and Pat Curren, to name a few — and it was then that he decided that surfing was his life. He wanted to immerse himself in all aspects of it, from shaping to riding the boards he made. And he shaped good surfboards.

One year later, he opened a little shop in Haleiwa called Surfboards Hawaii. He sold a few boards shaped by other shapers, but he also began to learn more and more about the art of crafting a surfboard. Using his engineering talents and his knowledge of wave riding, he made boards that worked incredibly well in a time when real, intelligent design was still in its infancy. Slowly, his surfboards began to catch the interest of surfers in Hawaii, and the legend of Dick Brewer began to heat up.

In 1965, he began working for Hobie Alter. He pounded surfboards out, trying to keep up with demand, making about $20 a board, specializing in big wave guns. In 1966, he moved to Kauai for a stint, then got an offer from Bing Surfboards to join the shaping team. The boards he made under the Bing label were revolutionary, and David Nuuhiwa showed what they were capable of.

Brewer bounced back and forth between Hawaii and California, shaping surfboards for some of the world’s best surfers. He taught Gerry Lopez about shaping. He basically invented the mini-gun. He created surfboards that were able to do what surfers wanted them to do, and in doing that, he kicked off an era of progression that led to what we see on waves today.

And now Dick Brewer is gone. “It is time for me sit on the beach and let you guys have ALL the waves,” he wrote on March 2. “I am leaving the hospital today and have been diagnosed with MSD. It is not worth putting my 85-year-old body through the stresses of treatment so I am going to hang on to the words of Buddha: ‘The secret to health for both mind and body is not to mourn for the past, nor to worry about the future, but to live the present moment wisely and earnestly.’ GO SURFING and get one for me!”

Dick Brewer’s influence on surfing and surf culture cannot be overstated. While he may be gone, his legend will live on for as long as people ride waves. The world is a worse place now without him in it, but we’re unbelievably fortunate to have shared space on the planet with someone like him.