An Ode to My Future Groms 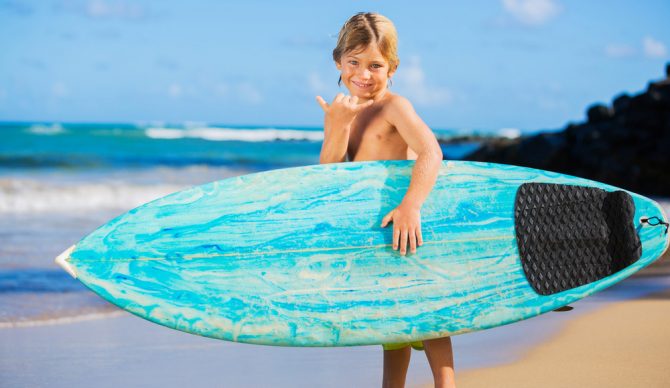 You can learn a lot from a grom. Selflessness is definitely at the top of that list. Photo: Shutterstock

I have a confession to make. I’m selfish. There, I said it. I want to surf when I want, go out when I want, and skip work when the waves are good. And if worst comes to worst, and I must show up to work, I work on a boat where no one cares if I show up salty. It doesn’t bring in the big bucks, but there’s a trade off to everything.

At the ripe age of 24, I have my whole life ahead of me and anything is possible. And sometimes, in the moments before sleep engulfs me, I think about my future and what I want to make of it. It scares me senseless, which is why I only think about it in a state of semi-consciousness. But I do think about it.

So naturally, the thought of kids crosses my mind from time to time. Do I want kids? Probably. Maybe. I think so? Does my mom want me to have kids? Definitely.

When I do have kids, they’re going to be awesome. They’ll be a couple of blonde-haired, blue-eyed beach bums (Sidenote: I do not have blonde hair or blue eyes so this is highly improbable.) My future husband and I will have them in the water before they can walk, their metaphorical gills reaching maturity before their actual lungs do. Once they’re surfing, they’ll be bringing in titles from grom contests and eventually work their way up to the Tour. Like I said, they’re going to be awesome.

But what if they don’t like surfing? What if they’re into soccer or God forbid, ballet? There’s no way I will be purchasing pink tutus and sit through hours and hours of the freaking Nutcracker. Not to mention all the surf trips I’ll have to sacrifice in lieu of college savings.

But when you’re a parent, being selfish isn’t an option. You take a crash-course in being selfless and have no choice but to pass with flying colors. And when you’re daughter performs in the Nutcracker, you have to be in the front row, on your feet, applauding like Kelly Slater just won his 12th world title.

So, a note to my future self: when my kid tells me they want to play soccer, learn ballet, or what have you, say yes and smile like you mean it. And when they go to their first competition and stumble and fall on their face, pick them up and encourage them to press on. I know my parents did. Heck, if my parents didn’t support me, I wouldn’t even surf.

My grom days were spent on the field, where I have two goals to attribute to my eight years of soccer. And you know what? My parents were on the sidelines every single game. Then on my sixteenth year when I wanted to surf, my parents obliged and got me a Christmas present that would forever change my life. And for that, I’ll be forever grateful.

So when I have kids of my own, I want to do the same for them and support them in whatever it may be. Even if it’s ballet.

But hopefully it will be surfing.