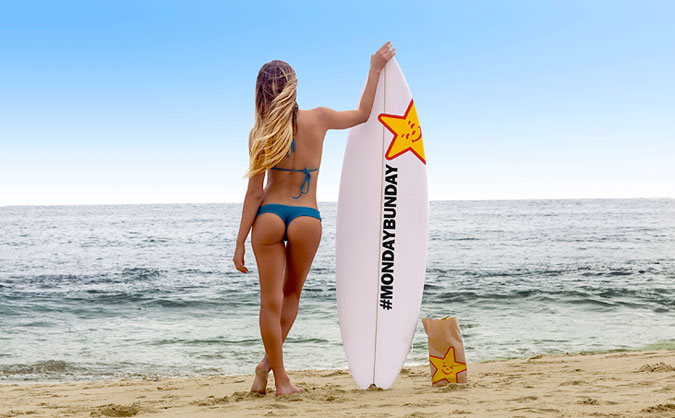 "Whose buns are these? Find out on #MondayBunday. Get 2for1 Western X-tra Bacon Thickburgers." This seems like an odd pairing. Photo: Carls Jr/Twitter

Oh, this is just too great. The fast food giant Carl’s Jr, purveyor of deliciousness and adult onset diabetes, has paired up with the thin, beautiful, fit Anastasia Ashley. There’s just something hilarious about a beautiful girl trying to make a horrifyingly sloppy mess of a burger sexy. Fast food will never be sexy. Surfing might be sexy, but not sexy enough to make disaster-burgers sexy. This is like putting lingerie on a pig. The pig does not become sexy, no matter how sexy the lingerie is. And in this case, the pig’s name is Carl. Also, no one brings burgers to the beach, because getting sand in a hormone-laden, artery clogging, grease-leaking excuse for a burger is just plain gross.

So here’s the rumor: Carl’s Jr. is considering Anastasia for an advertisement, and if the rumor is true, she could join a long list of beautiful women that have dumped grease into their guts on your television.

The list includes women like Heidi Klum, who has always been known for her penchant for burgers:

Kate Upton, the weirdo known for going to movies by herself, also appeared in one:

And of course, what car wash is complete with out Paris Hilton smashing a giant burger in her mouth?

While I can appreciate both the women’s reasons for doing these commercials and Carl’s Jr’s thinking (face it, their target market is probably wearing dirty underpants on a dirty couch right now, not out on a date), these don’t exactly move equality ahead, if you know what I mean.

And now, if you’ll excuse me, I have to make a run to Carl’s Jr. I suddenly have a craving for a Western X-tra Bacon Thick Burger.