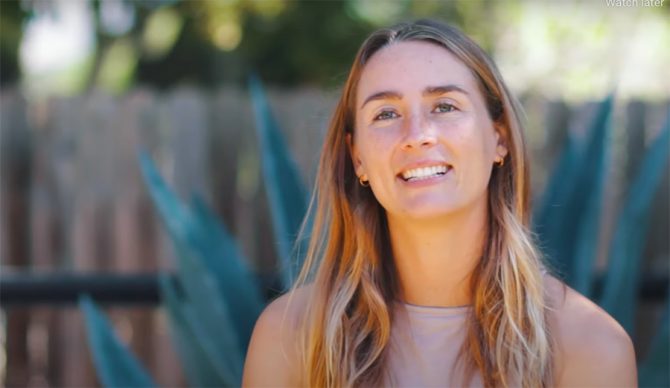 Anna Gudauskas, on the great Pacific surf trail for conservation. Photo: The Inertia

On July 13th, surfer Anna Gudauskas (formerly Ehrgott) and photographer Sarah Lee set off on a 10-day, 15-stop, 1,200-mile surf trip. The pair started their journey in La Push, Washington, and will end in San Diego. It’s not just a surf trip for the sake of a surf trip, though — it’s a surf trip to raise awareness about the importance of ocean conservation.

The goal is simple: aside from surfing waves all the way down the west coast of the United States, they want to leave each beach a little better than they found it. As they head down the coast, locals at each stop can join in on a surf session and a beach cleanup. The National Resources Defense Council estimates that somewhere around 80 percent of marine litter comes from land-based pollution. If every surfer picked up a few pieces of trash every time they surfed, it would make a very big difference. Unfortunately, too many of us simply turn the other cheek to the little bits of flotsam and jetsam that litter the sand.

Anna Gudauskas isn’t new to environmentalism — far from it, in fact. She’s not afraid to shout it from the rooftops, either. “There’s never been a change of heart moment for me,” she told Rebecca Parsons for Men’s Journal. “I’ve always felt strongly to live by my morals – I think this is where I’m a realist and not the dreamer I normally am. It’s night and day. If I can’t bring myself to kill a cow every time I have a craving for protein then who am I to pay someone else to do my dirty work? If I can’t live with clear cutting forests firsthand, then why am I supporting industrial agriculture? If I don’t like seeing plastic floating around the ocean, then why am I buying items in plastic packaging? It just takes caring and doing a little bit of research; I don’t like to brush things under the rug. This is the tipping point of total environmental collapse. We’ve induced a mass extinction. I’d be damned if I didn’t improve the way I live to exist in a way that supports the planet that I want to pass down to the next generations.” 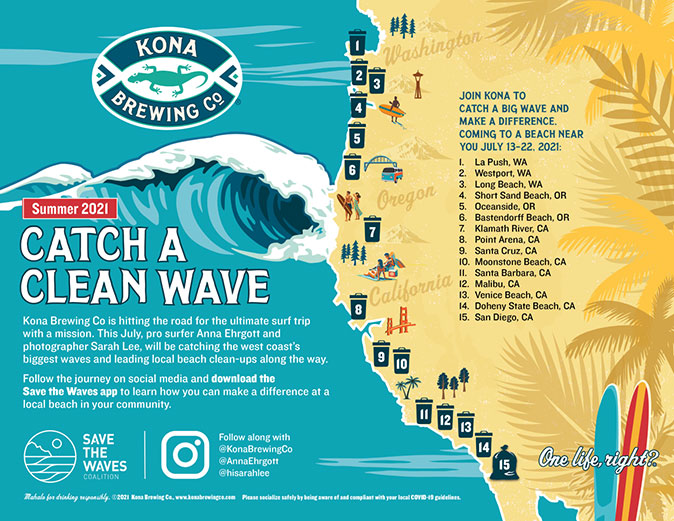 Join in on the last little bit of an epic surf trip. Image: Kona

The trip, which includes places like Westport, Washington, Oceanside, Oregon, and Santa Cruz, Malibu, and Venice Beach in California, will culminate with the adoption of a Southern California beach.

The surf trip is backed by Save the Waves and Kona Brewing, the latter of which committed $50,000 to the former’s efforts to keep the beaches clean.

The schedule, should you want to join in on the final days, is as follows: