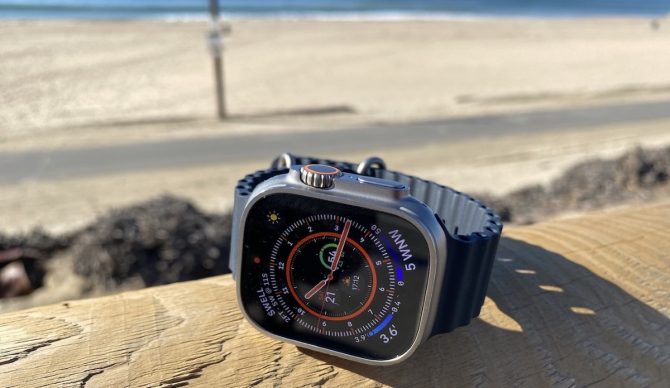 “This is going to save our marriage,” she said. Although my wife was kidding, I knew there was some truth buried in there somewhere. In this case, maybe a lot of truth. I had just unboxed the Apple Watch Ultra, the first smartwatch I have ever owned, and Kelly was looking over my shoulder. As I gushed out loud about some of the cutting-edge features of Apple’s newest and toughest smartwatch to date, she had one concern. Would I be able to send and receive texts and calls while surfing? In other words, would I have any excuses for not letting her know if I was running late, got caught chatting in the water, or was otherwise preoccupied and not able to make it home at the time I said I would be home?

Over the years, my wife and I have established a pretty solid rapport when it comes to surfing. Not being a surfer herself, she can get a general sense of the current conditions based on whether I’m pacing around the house, itching to get out in the morning, or if I’m good to spend an hour making pancakes. However, recently I’ve developed a terrible habit of a planned session running late because conditions were better than expected, and I had no way to send updates on my timing.

After sending my first “One more wave then heading in” text from the lineup, though, I found myself wondering why it had taken so long to get on board with wearing a smartwatch in the water. Surf watches can do a lot, from telling you the tide to tracking your session and recording your waves on local surf cams. Here are our favorite surf watches. Read more…

To Sum Things Up: The Apple Watch Ultra is an incredible smartwatch for surfing, with tons of functionality, such as compatibility with Surfline Sessions, accurate GPS, lots of safety features (like an ear-splitting siren), and best-in-class smartwatch features (texts, calls, etc.) for those with iPhones. If you’re someone who wants a smartwatch for surfing and life in general, this is the watch for you.

Battery life is great for an Apple Watch but still subpar among other smartwatches.
The best tide-tracking features are reserved for those who subscribe to premium apps like Dawn Patrol and others. 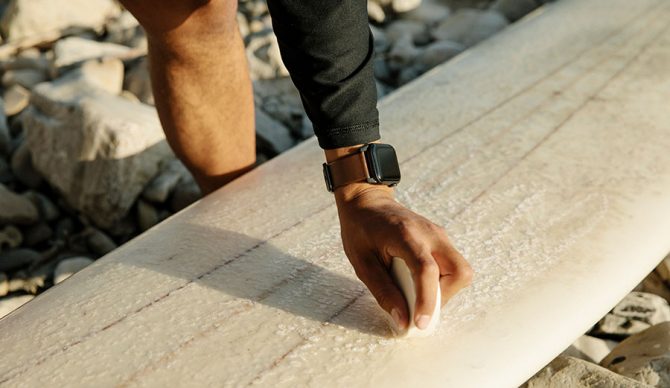 The Apple Watch Ultra can be a fantastic surf watch. Who knew? Photo: Nomad

Using the Watch with Surfline Sessions

Easily the most exciting feature I’ve been able to put to use in the last month has been Surfline Sessions. For the uninitiated, Surfline Sessions pulls clips of all of the waves you catch in front of a Surfline cam during a given session and puts them neatly into a little map or list for you to watch later. It also gives you data on each of your waves, including length of ride, speed, etc. To get it, you’ll need Surfline Premium and the compatible hardware, in this case, an Apple Watch, but it also works with the Garmin Instinct 2 or the Rip Curl Search 2 GPS surf watches.

Of course, an expensive smartwatch isn’t the only way to watch your waves on Surfline’s cams. I’ve spent more time than I care to admit using Surfline’s cam rewind feature trying to find my waves after a session only to realize that I was out of the frame or, worse and more often, that my wave was much less impressive looking than it felt. But, being able to start a session on your watch, then pull out your phone when you get to your car and see every wave you caught without any time wasted trying to find yourself in the lineup is absolutely wild.

At this stage, I do have a bit of an internal struggle with how proximity to and angle of available cameras will influence choices about where to surf. Already, during my first surf with the watch, a friend and I were eyeing a sandbar down the beach that looked pretty fun but was nowhere near a camera. We opted for paddling straight out from the camera to give the Sessions feature a proper test. It’s certainly strange to think that future surfs may drive me to confront my own narcissism in the form of a philosophical dilemma — better waves without footage or marginally worse waves with documentation. 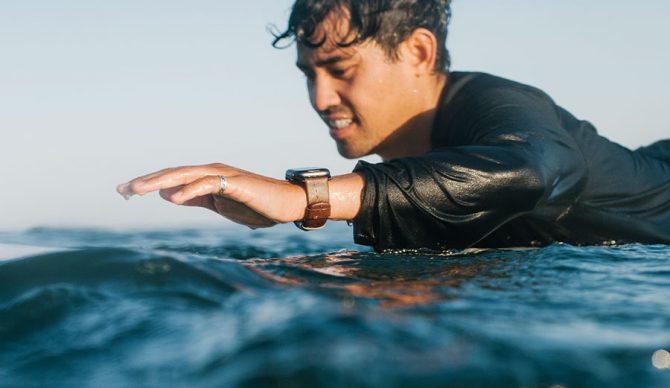 Looking for a strap for that watch? The folks over at Nomad Goods have a variety of Apple Watch straps designed with surfing in mind. Photo: Nomad

Can I get all of the information a tide watch displays?

Immediately after getting the Apple Watch Ultra up and running, I wanted to figure out how to display the information I had grown accustomed to having on my wrist while wearing my trusty tide watch. This turned out to be less straightforward than I had hoped. With the Ultra, Apple designed a brand new digital watch face called the Wayfinder that is meant to be customizable with the option to display all sorts of information, including current weather, outside temperature, air quality, sunrise and sunset, and more.

However, to display info outside of these defaults in the watch face, like the local tide, you’ll need to download other apps. Many of these apps have stripped-down free versions, but if you go premium, they offer more features. Going with the free versions of these apps, I am able to display current local buoy readings, wind speed and direction, and tide information all on my wrist, which is admittedly a huge upgrade from a standard tide watch. However, the thought of having to manage multiple paid subscriptions to really get the most out of the watch is a bit frustrating.

Surfing isn’t the only thing I do. What are some of the Apple Watch Ultra’s other features?

Outside of surf-specific displays and uses, one of the most exciting prospects of incorporating the Apple Watch Ultra as a tool for outdoor play is that its capabilities span other disciplines. As I mentioned, Apple designed the Ultra’s default Wayfinder watch face with hikers, explorers, divers, and runners in mind. One awesome feature of the Wayfinder watch face is with a single tap of the face’s bezel, it becomes a compass and displays your current latitude and longitude. While this feature may have limited practical use in the lineup, it is incredibly useful in other crossover outdoor and backcountry pursuits. In my case, I can’t wait to try it out during my next splitboard tour.

The Ultra also features precision dual-frequency GPS (which is incredibly accurate) to track runs, but also to use the compass’s backtrack feature, which helps you find your way home or back to the car in unfamiliar terrain. In the event you are lost or need to call for help, the Ultra has a handy SOS siren. These safety features are yet another way the Ultra may save relationships, by literally saving you.

While not unique to the Ultra, one of the biggest upgrades for me going from a tide watch to the Apple Watch has been going for runs without the need to carry my phone in my pocket for music or to track the run itself. I do the same in the rock climbing gym now and am never looking back. Again, not unique to the Ultra or even Apple watches. But, if you’re like me and you’ve been reluctant to take the leap into smartwatches, this is a huge benefit.

All that being said, the landmark feature of the Ultra is its ability to send and receive texts and make calls without your phone, which is why my wife was so excited about this gadget in the first place. You’ll need to do some setup beforehand (and make sure the Apple Watch you buy is equipped for cellular), but now if a session is unexpectedly running long, I can let my wife know I’ll be late from the water. If you have big fingers like I do, the small keyboard can be a little cumbersome, especially in water when the touch screen doesn’t work as well. But, being able to forego a phone for a watch that is perfectly capable of responding to urgent communications can be pretty freeing. To text from the water, you’ll have to turn off water lock (a feature that disabled the touch screen and is activated automatically in water), every time you want to text. This adds an extra step to texting from the lineup that can make things challenging in the event you’re occupied when a rogue set begins fluttering in the distance. Overall, though, this feature is very handy. 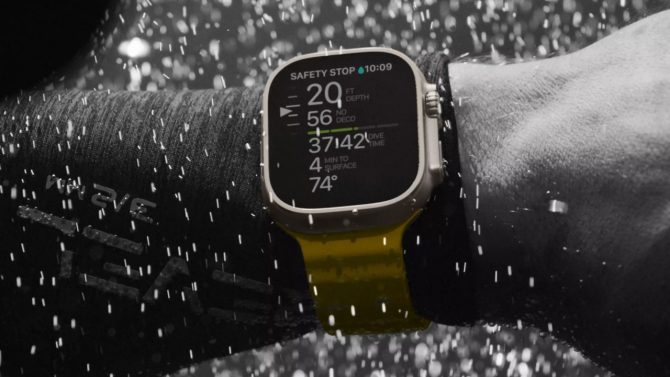 One of the watch’s biggest selling points is its potential to be a fully-functioning dive computer, another plus for water enthusiasts more generally. Photo: Apple

What are the criticisms of the Apple Watch Ultra?

After a month of everyday use, I can say that the Apple Watch Ultra is some seriously capable tech with the straightforward user experience you’d expect from Apple. Still, when other watches in the category boast battery life of up to several weeks (albeit in specific modes that conserve battery), the Apple Watch’s 36-hour battery life is a difficult shortcoming to ignore. Just over the past month, I’ve found that I’m charging the watch every other night or so.

For everyday use at my local, I have no qualms about this. Thinking about other use cases, though, like an extended surf camping trip, a backpacking trip, or other multi-day adventure in the backcountry where power is a scarce resource, the limit of a day and a half of regular use makes it a difficult tool to rely on. Sure, you could bring along a power source to juice back up, but that means additional gear and forethought that just isn’t required for some of the Ultra’s competitors (The Garmin Instinct 2 Solar sports a huge battery life of 28 days and solar charging).

Who would you recommend the Apple Watch Ultra for?

Surfers that also regularly enjoy other outdoor adventure pursuits like hiking, camping, running, diving, skiing, or snowboarding would benefit the most from Apple’s upgrade to its wrist-mounted hardware offering. Those that mostly stick to surfing may end up paying for more features than they need. To fully take advantage of the watch’s surf-specific capabilities, expect to throw some extra monthly dough down for ancillary subscription services if you don’t have them already (read: Surfline’s Sessions feature). The battery life may not measure up to its competitors, but for the majority who aren’t regularly spending days at a time away from a power outlet, this shortcoming may be worth the trade-off for a more slick user experience that integrates nicely with Apple’s ecosystem of products.

Overall, if you’re looking for a capable adventure watch for a variety of outdoor pursuits that’s easy to get up and going and features some powerful tech, the Apple Watch Ultra is your pick. For other great options, check out our roundup of the best surf watches below.

Surf watches can do a lot, from telling you the tide to tracking your session and recording your waves on local surf cams. Here are our favorite surf watches. Read more…
View Comments