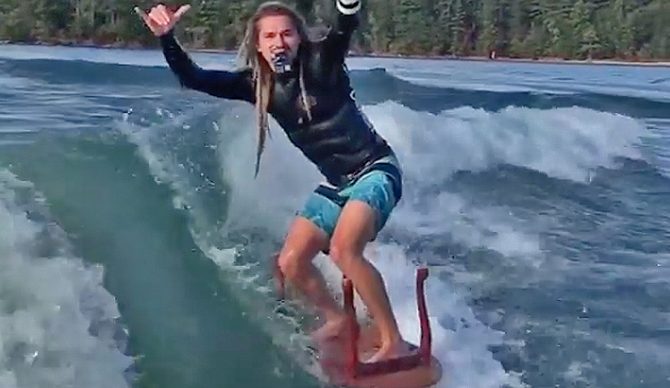 Austin Keen can surf anything. That’s a fact. So when he recently snagged a table from Goodwill for nine bucks, the next logical step was obviously to flip the thing upside down and wake surf it. The stunt quickly turned into something much cooler, though.

When Keen shared video of his new table/board, fans reached out wanting it for themselves. And that’s when he decided to leverage the interest to start an auction and donate all the proceeds to a Nashville-based mentorship program called Water Walkers.  The table auctioned for $875 and OneWake, a sponsor of Keen’s, offered to throw in another $500 on top of taking care of the shipping costs.

Wakesurfing a coffee table I bought for $9 at Goodwill 🤣. Since I had such a big response to who wanted the coffee table, I decided to auction it off and send all proceeds to @waterwalkerstn charity -Bringing hope to inner city youth through education and wakesurfing and other water sports. The bidding has closed at $875!! Check my story for the winner. @onewake_ Has generously offered to take care of shipping costs and match the bid up to $500!!. I will shout out the winner on my story, sign the board, and throw in some AK gear as well. Yew!! 🤙😎. This is all last minute so bear with me on the logistics of this makeshift Instagram story auction 😅🤙. #nonprofit #wakesurfing #charity #youth #surfing #travel #adventure #lifestyle #trickshot #tricks #sportscenter #sctop10 @sportscenter

“I am thrilled to be able to give back,” Keen told Adventure Sports Network. “I had no idea that this video would get the attention that it did, so to use it as an opportunity to team up with my sponsor One Wake and turn it into a donation to Water Walkers – it means something special to me.”

Water Walkers is a program that introduces at-risk youths to watersports through after-school programs in their community. “Mentoring is another large component of what we do,” said Water Walkers in a release. “A huge factor in a child’s development and whether they become happy, successful adults is having one person in their lives who believes in them!”