Beat It, Kook: Everyone’s Got to Start Somewhere 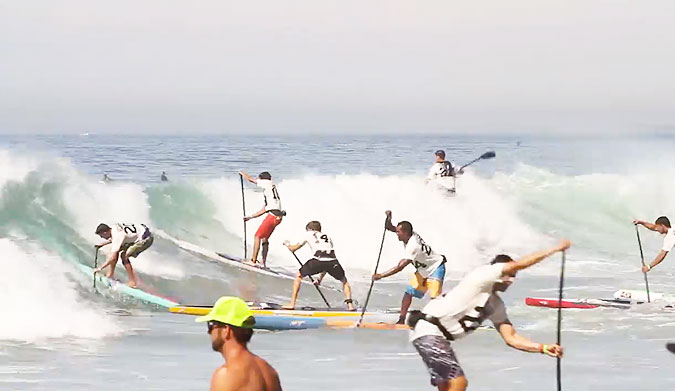 One of the these people has either called someone a kook, been called a kook, or acted like a kook.

Nobody wants to be called a kook. But when you see someone nose dive and launch their board five straight feet into the air, or someone falls while paddling on flatwater, or the guy who’s definitely got his leash on the wrong foot, you can’t help it. “What a kook,” you whisper to your friend. Well, ladies and gentlemen, I have news for you: at one point we were all the one being called a kook.

I’d been paddling for a few short months and had only recently bought a board. Just for fun, of course; I was a surfer at heart. I was talking to a gal named Kristin Thomas and she asked me if I’d ever tried a race. After laughing, I gave her a definite no. A few weeks later, though, I found myself driving to a race with a SUP board strapped to the roof of my car and my mom in the passenger seat, my sole cheerleader in a world I barely knew existed.

We pulled into the parking lot and it hit me: I was going to spend the day being a complete and total kook. I parked my twenty-year-old Camry and unloaded my foam Costco Wavestorm from the roof, and took it all in. Bark, Kings, BOGA–I’d never seen so many nice race boards. And everyone, it seemed, knew exactly what they were doing. I was clueless. And let me remind you, I was here with my mom.

I’ll be the first one to say it: what a kook.

This past year was one of the driest in California history, so naturally my first SUP race landed during the one storm of the season. And let me tell you, Mother Nature had a lot of bottled up fury to unleash after being held captive for so long. The race was moved into the harbor because conditions were too wild in the open ocean. The course would remain its original four miles in length. The furthest I’d ever paddled was three. I was ready.

My mom and I eventually figured out where to check in and awkwardly stood on the beach sticking out like a sore thumb with my foam board amidst the race boards and experienced athletes. My mom pulled out her Tommy Bahama beach chair (also from Costco) and took a seat, ready to watch. I just wanted to get this over with.

The race started. I hung toward the back, careful not to get in anyone’s way. I had one goal: to stay on my board and finish the race. The tide threatened to knock me off my board and I was in dead last, but I kept paddling. Eventually I passed one person and then another, slowly working my way through the crowd. Don’t get prematurely excited and think that this is an underdog story of success and I won. Because it’s not. And I did not. But I did finish, and I wasn’t last. Success comes in different forms sometimes.

I was stoked, more stoked than someone who got 124th out of 140 people should have been, but I was. I got positive feedback from my fellow paddlers; one man even told me if I hadn’t been on a foam board I would’ve won. Even though it wasn’t true, it meant a lot.

Everyone’s got to start somewhere. For me, it was on a foam board racing in crazy conditions. Maybe people called me a kook in muffled voices, maybe they didn’t. It doesn’t matter. What matters is that I fell in love on a stormy day in San Pedro, California with a sport I barely knew existed. I’ll think twice before calling someone a kook next time.