Bet Your Life On It: Shark Shield’s Promotional Stunt 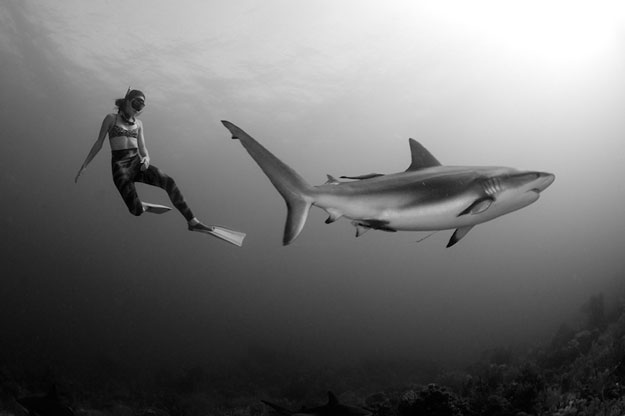 Would you bet your life on a gadget? Photo: Lia Barrett

I just read a short press release about something called Shark Shield.  They’re doing something that seems pretty ridiculous.

A little about Shark Shield: in simple terms, it’s a small gadget that attaches to either your surfboard or your leg and emits “a three-dimensional electrical wave form, which creates an unpleasant sensation impacting the shark’s ampullae of Lorenzini.”

Certain types of ocean dwellers have a network of jelly-filled canals that run throughout their head called the ampullae of Lorenzini. They’re used to detect electrical fields in the water. And, as nature’s most efficient hunter, there is some speculation that sharks can detect even the tiniest electrical field, which are generally emitted when muscles (in a shark’s case, in prey) are contracted.

Shark Shield developed a technology that essentially punches the shark in their ampullae of Lorenzini. According to Shark Shield, “the closer the shark is to the Shark Shield field, the more spasms occur in the sharks’ snouts. This becomes intolerable and the shark veers away, and usually doesn’t return.” Usually.

So here’s the crazy thing they’re doing: Initiating a program called “Surf Any Break Without Intimidation.”

The program is focused on Reunion Island surfers, who, in July, were banned from surfing outside their lagoons due to a large number of shark attacks. Reunion has been at the center of shark debate issues more than once, recently instating a slew of measures including a cull of 90 sharks – 45 bull sharks and and 45 tiger sharks. “An immediate prohibition of swimming, surfing and bodyboarding within the coastal strip of 300 meters from shore in the department of Reunion until October 1st, 2013,” said the government. “These activities are only allowed within the shallow ‘lagoon’ and supervised areas as determined by the Prefecture.”

Now that the ban has been lifted, Shark Shield is offering to sponsor Reunion Island surfers to get back in the water with a steeply discounted rate on their gadget. It’s only available throughout the month of October, and only for the first 300 people.

Tempting people into the water again with a shameless promotion seems a tad… well, shameless. In a place that’s already seen far too many attacks (whether it’s because of a marine sanctuary, more people in the water, or a rise in the shark population), giving people one more reason to get back in the water in the name of making a buck doesn’t seem to be the best idea.

Granted, Shark Shield’s track record is pretty great. Better, in fact, than any other shark deterrent on the market.

In 2012, Australian scientists tested the device off the coast of South Africa, a place known for it large population of sharks. They towed seal decoys with the Shark Shield behind a boat. When the device was turned off, there were 16 breaches and 27 surface interactions. When it was on, there were no breaches and only two at-surface interactions. And they’ve done this test numerous times. Those are pretty good results, right?

But the fact remains that sharks are wild animals. They’re predators. They’re unpredictable. And no matter what sort of deterrent we use, there’s still the chance that they’ll come looking for food.

Shark Shield can’t guarantee that, if you’re using their product, a shark won’t bite you. And if they can’t guarantee it, they shouldn’t be tempting people into the water.