Big-Wave Surfing Is Bigger Than Ever; Where Are the Women? 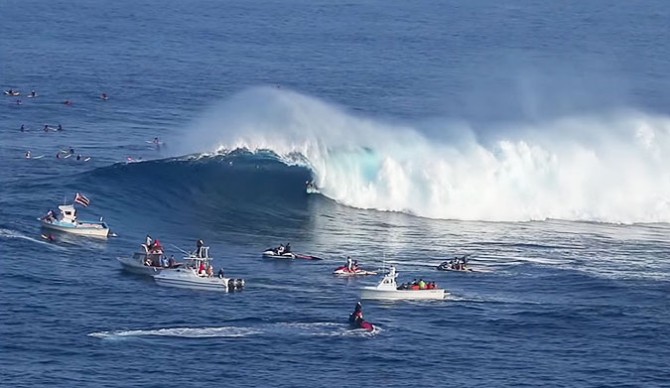 Just three months in, 2016 has already been an historic year for big-wave surfing. One might thank El Nino. Clyde Aikau said he hadn’t seen Waimea so good in forty years, and John John Florence heroically claimed the ninth-ever Eddie contest, taking a bold step in cementing his legacy as one of surfing’s greats. And as we saw with Titans of Mavericks, the event has become one of the greatest big wave spectacles on earth. Beyond that, with the Big Wave Tour fully functional and growing under the guidance of the World Surf League, big wave surfers have much to celebrate in 2016.

But amid big-wave surfing’s massive rise, the question remains: Where are the women?

Over the course of Titans of Mavericks 17-year history, every single champion and competitor has been a man. Such has been the case with the Eddie as well, but this year, after receiving pressure from media and the local community, Titans of Mavericks included a female alternate in Savannah Shaughnessy, a major step forward to be sure. But a woman has never actually competed in the full event. Nor, outside of an all-female heat at Nelscott Reef in 2010, have women had an event or contest series of their own.

There are enough women riding big waves with technique and knowledge that they deserve to have a competitive platform of their own, not against the men, but to compete, and share the lineup with each other,” said Leah Dawson.

Leah is a former competitive surfer from Florida who stopped competing at 25 to focus on cultivating a tight-knit female surf community as opposed to surfing against the women she adored.

Paige Alms, 27, has achieved worldwide recognition for charging big waves that few others have. She was the first woman to get barreled at Jaws and has been nominated four times at the Billabong XXL Ride Of The Year Award.

“That wave was something that I had dreamed about forever,” Paige said in an interview. “When it finally happened, it took a while for it to feel like reality.”

Alms, originally from Canada, first experienced big wave surfing at the age of 15 in Maui, where she moved to when she was 9-years-old. Her forays into documentary filmmaking coupled with her courageous performance in waves of consequence have made her a leading voice for women in the surf industry.

“I’d still like to see the magazines cover more women’s surfing, it’s rare to even see one photo of a female surfer in Surfer or Surfing magazine,” Paige told The Guardian. “All of the highest-paid professional female surfers are beautiful, amazing athletes, but are all marketed as models or sold as sex symbols in advertising” 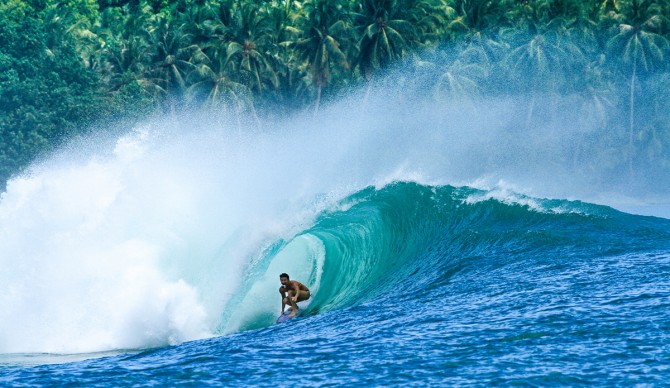 Leah Dawson. Well versed in barrels, no matter the length of the board beneath her feet.

Rochelle Ballard, a who left an indelible mark on professional women’s surfing as a then-ASP World Tour competitor, is all too familiar with the challenges associated with pioneering an identity and recognition for female surfers in waves of consequence.

“It was like climbing up a trail on a big mountain in undiscovered territory – it was really a great challenge,” said Ballard. “Our main focus was surfing our best, proving ourselves, and creating new avenues for women’s surfing to grow and be recognized. As hard as it was at times, looking back now, I loved being a part of my generation. Our generation was the big rise in women’s surf apparel, and we were reaching mainstream media and fans that were not just in the surfing world.”

Rochelle admitted that the topic of equality in big wave surfing is sensitive, and she has multiple takes on it.

“As a former world tour competitor, we went through a lot of hard times proving ourselves to be recognized as women and not compared to men, and it took some time to change all of that for it to be where it is today,” Rochelle said. “If you look at the history of men’s big wave surfing and how many of them were riding big waves before there was a contest for it, it makes sense that it is still coming of age for female big wave events to stand alongside the men’s contests.”

Rochelle pointed out that even at Sunset Beach on the biggest days there are not that many women out surfing and only recently has it become a common sight to witness women surfing large waves at Waimea, Mavericks and Peahi.

“When I was in my prime of surfing big waves and its exploration it was really only Layne (Beachley), Keala (Kennelly), myself and a couple other women doing it for the love and passion of it. Yet still today I think there are only a handful of women that are strong enough, talented enough and brave enough to earn that title,” Rochelle said.

Similar to Rochelle and Keala Kennelly, Leah agrees that big wave surfing competitions should not merge men and women together in the same heats.

“A woman should not be held at the same bar as the men, there should just be a different bar all together,” Leah said.

Women and men are not built the same, we do things differently.  Let’s celebrate that, and create the platform for progression.

Rochelle elaborated, “I personally think the field needs to grow more in numbers and in experience to have an event in large waves. Paige Alms was the first woman at Pe’ahi to get a substantial in and out barrel ride, and it needs to happen more often and from more women in my perspective to have a legitimate contest.”

As far as the danger element goes, Leah said big wave surfing is hazardous no matter your gender.

“It’s really all about your own passion and ability that grows through experience,” said Ballard. “The more you’re out there, the better you will get and the more you become one with the ocean riding giants. Be true to yourself and your heart should always remain true to your intentions of being in the ocean and respecting it with reverence, as it will teach you many things about life.”

“I’ve concentrated my love of surfing on spirituality, community, filmmaking and celebrating the ocean,” Leah explained. “We are all something special. Woman or man, may we celebrate each other. Both are necessary for each to exist. Celebrate our differences, celebrate our similarities. Need not we compare.”

The Titans Of Mavericks did not respond to multiple requests for comment.