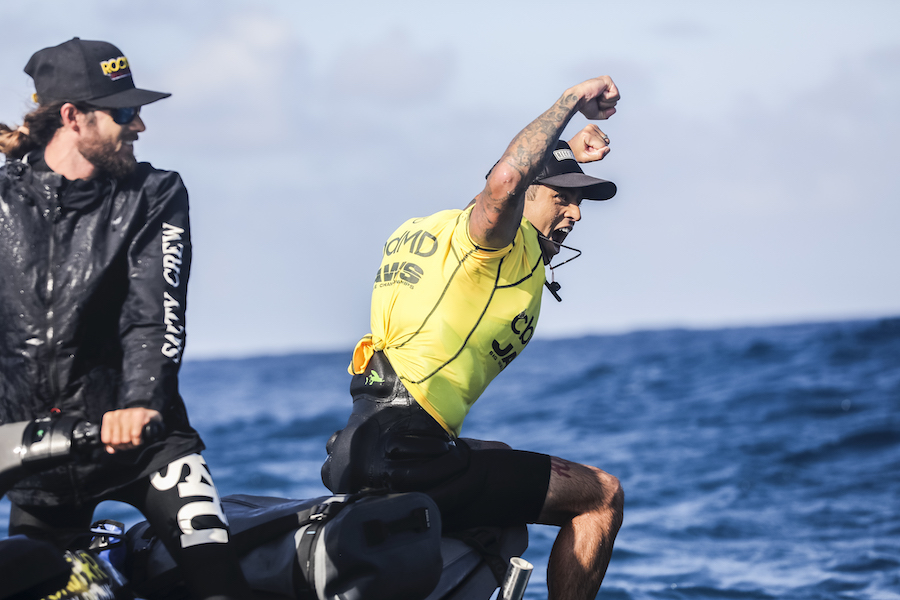 In the pre-dawn on the north shore of the Valley Isle, thunder shuddered from the sea.

The last full moon of the decade shone bright as it set over 15, 20, 25-foot waves marching into the island’s edges at rapid succession. Cows grazed lazily on the cliff at Ho’okipa as monstrous walls littered the beach with large branches and filled the air with a glittering spray painted gold as the sun surmounted Mount Haleakala.

The big wave contest at Pe’ahi — rechristened this year as the cdbMD Jaws Big Wave Championship — kicked off under cloudless skies and a shocking absence of wind for an island that is an unrivaled Mecca to kitesurfers worldwide. The conditions were some of the best the contest has seen since its inception; the waves were big, meaty, scary enough to make you afraid at the thought of doing it yourself but makable enough that you didn’t fear for the athletes’ safety (despite the decidedly heavy-handed wipeouts the most perfect big wave in the world doled out today — Jamie Mitchell, Keala Kennelly, Torrey Meister: we’re damn glad you’re all okay).

The cliffside at Pe’ahi showed what a healthy infusion of sponsorship dollars can do for an event that budded from humble beginnings. In the past, two white-topped tents looking at Jaws (one for VIPs, the other for judges) and a small-scale tent for athletes and broadcast to stash equipment decorated the cliffside. This year, three additional tents offered those on the cliff a more spacious and comfortable place to kick back, relax, and drop jaws for Jaws, the sole paddle-in big wave event was looking like the Championship it now is, instead of the Challenge it once was.

But in the water, the men and women who dared to dance had the same level of grit and desire as always. There were a couple notable additions to the roster this year, among them North Shore legend Eli Olson, who gained global big wave cred last season for that third-reef Outer Logs behemoth he charged that was so big it wouldn’t even fit on a screen for Big Wave Award judges to measure. Also welcomed into the tribe were two young Maui-built rippers: 15-year-old Ty Simpson-Kane and 18-year-old Annie Reickert, who both benefitted from having their lifelong mentors in the water as friendly competitors.

Despite a Round 1 victory that made him look like he’d been on the Big Wave Tour for years, Olson bowed out in the semis, and young Simpson-Kane didn’t make it through his Round 1 heat (despite three well-ridden waves caught, the last of which snapped his brand-new, custom SOS Shapes Jaws gun, a gift from his guru Ian Walsh just a month before). Multi-faceted waterwoman Reickert, however, won her semifinal heat and was joined in the women’s final by her inspiration Paige Alms, who also helped coach her young grasshopper in the water between sets.

The women’s contest —spread out over two semifinal heats and a one-hour final — was a yo-yo of leading ladies. Australia’s Felicity Palmateer opened the first semi with a skillful decent that put her way in front before Keala Kennely hacked away at the points dividing them by continuously sending it on waves others dare not go  (the same tactic that won her the 2018 Jaws Challenge). Reickert and Oahu’s Emi Erickson posted numbers above the rest as well in their heat, but for the her first heat two-time former event champ Alms was uncharacteristically quiet. She squeaked into the final round in third place of Semifinal 1 with a heat total of less than one point. Could this be another year without Maui’s queen of big waves amending her throne?

Alms decisively answered in the final, clinching it early in the hour with a casual take-off on a wave easily hitting 30 feet on the face. Like a snowboarder cruising down a steep line, Paige sailed down her tropical mountain fearlessly, eyes fixed on the cliffs ahead, ignoring the avalanche chasing her. Unafraid, she didn’t wipe out with arms and board flailing — instead, she was simply engulfed in the whitewater, her solid stance unshaken as she disappeared beneath the rolling foam. This was the Paige Alms we knew, the Paige who owned this event and helped put women’s big wave surfing on the map. The 6.17 she earned for that ride (doubled to a 12.34 as per BWT scoring) was the only score she posted during the heat, but it was enough. Her legend status was sealed.

Spectators who didn’t make it to the exclusive cliff access had a few options: watch it on local TV, hike two miles down Hahana Road to the west side of Pe’ahi Gulch, or go to Paia hotspot Paia Bay Coffee & Bar for a viewing party hosted by Juneshine, the hard kombucha brand founded in part by local boy and Jaws master Albee Layer. The stylish and intimate indoor-outdoor cafe was at capacity as people were transfixed to the screen set up in the middle of the space, sipping Layer’s head-spinning concoctions that are sprinkled with items that are actually good for you like activated charcoal and green tea.

To his credit, Albee had a brave showing out in the water today, but what was guaranteed to be another standout performance was cut short when he ended up exactly where Turtle says not to be on a wave the size of a Wal-Mart. Folded into a spin cycle of blue-tinged foam, Albee was battered around before resurfacing in his Round 1 heat, ultimately sustaining a severe concussion and a few pulled muscles in one of his newly-replaced hips.

“I spent about 10 minutes throwing up,” the concussed Layer said on his Instagram of resurfacing after braking his vest and being held down. After borrowing a new jacket, he charged back out into the meaty surf. “I went out to try one more but after paddling hard over a wave I started seeing stars again and begin [sic] puking more. Figured it was time to call it.”

Ultimately, Jaws proved that it’s the locals who hold the key for the wave’s biggest prizes. Like Alms, the men’s champion was no stranger to the top of the Pe’ahi podium: now a champion four times, Billy Kemper seized this year’s title in commanding fashion, negotiating cavernous 35-foot barrels with the same ease he’d use to slot himself in 10-foot Sunset bombs. As Kemper told The Inertia’s Senior Editor Joe Carberry on our podcast before the event, he holds this wave sacred, especially because the ashes of both his departed mother and brother were spread on Pe’ahi’s shoreline.

“I look at Jaws like the World Championship on the CT…I look at that event like everything in the world. I have to win this event — if I get second place, that means I get last. I don’t care about anything else besides winning this event,” the father of four said. “Jaws is mine. I want it more than anything.”

Between Kai Lenny carving the XXL faces like a Thanksgiving turkey and Ian Walsh nipping at Billy’s heels alongside Makua Rothman, the road to the top was a hard-fought battle, and the perfect antidote to Kemper’s early exit from the Billabong Pipe Masters on Oahu the day before. Beating his chest as he rode on the back of a ski minutes after the heat ended, Billy randomly launched himself off, diving deep into the warm, clear, mana-filled waters that raised him to be the powerful XXL-wave-charging family man he is today.

“Maui is a special place, you know…Maui no ka oi, it’s the best. As far as talent, where does it stop?” he said, rattling off a laundry list of Valley Isle legends of surf. “I’m really proud to say that’s where I was born and raised…that’s where my blood’s at.”

Listen to Billy’s full podcast with The Inertia, below: