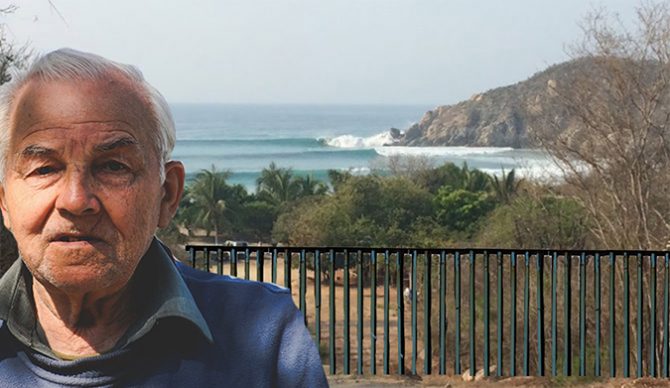 Retirees are sick and tired of surfers from the north stealing their waves. Photo: (Edited) Wyatt Fowler

In a sizzling story plucked right from the juicy pages of AARP (yes they still print), a group of angry American ex-pat surfers reportedly living and loving life in Mexico have created a GoFundMe page to crowdfund a new, separate border wall to actually keep “foreign invaders” and “kooks” from coming south to take advantage of their wave-rich resources across the border.

According to the well-written article – that moves as fast a golf cart on retirement-center blacktop – the campaign had reached three-quarters of its $20 million goal within 48 minutes of its release, showing just how deep the pockets are of retirees taking advantage of cheaper living south of the border and how they’d grown impatient waiting for President Trump’s proposed project (which wouldn’t keep people from coming south anyway).

“That, ‘Give me your tired, your poor, your huddled masses,’ crap is for up North,” Demzal Sour told AARP as he looked down on a beautiful bay from Gringo Hill, a quaint collection of upscale trailers that has become one of the most influential retirement communities in Mexico. “We’re sick of all the San Diego college kids coming down to steal our resources, or the ski patrolmen waiting for rafting season to start, or the Riverside County retirees. All of em with their fishes and Wavestorms and Mini Simmons and thrusters and newfangled wave craft. They’re trying to leech off our system down here.”

Irony notwithstanding, Sour went on to outline the “reverse border” wall that would run from Tijuana in the West, just south of the current border crossing where President Trump wants to build his wall, to the Gulf of Mexico in the east south of Brownsville, Texas. The proposed structure would be constructed from recycled Razor and Golf Cart tires, recycled longboard foam and golf clubs broken in frustration at the local course. “We want this thing to be completely environmentally friendly,” Sour added.

Sour also said that a second campaign would be started to fund salaries for guards to man the wall – which would be comprised mostly of retirees ready to fight the “good fight.”

“We want to put people to work,” Sour said. “Costco, Home Depot, Walmart, YMCAs, those won’t be the only option for people to subsidize their pensions anymore.”

A phone call to the Department of Homeland Security, which oversees ICE, seeking reaction was not immediately returned.

I’ll have more for you on this fluid story as info becomes available.