Brisa Hennessy Is the Kindest, Fiercest Competitor You’ll Ever Meet 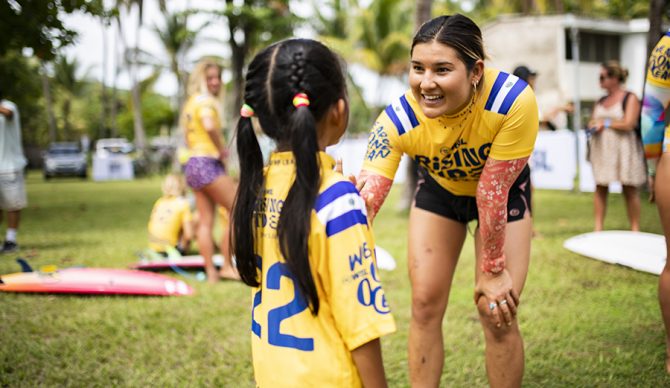 Brisa Hennessy is one of the fiercest competitors you’ll ever come across. She’s also one of the most genuinely positive people on tour. The combination of characteristics makes for an interesting competitive dichotomy.

Hennessy’s upbringing was anything but normal. Born in a small town in Costa Rica, she grew up in an unconventional, off-the-grid home in the jungle. Her dad ran a surf school and her mom was a chef at an eco-lodge, so Hennessy spent the majority of her childhood in the water.

“I spent nine years of my life in [Costa Rica],” says Hennessy. “Just living life super simply and falling in love with the ocean and my surroundings. The pura vida lifestyle was a big part of shaping me into who I am.”

Around the age of nine, Hennessy and her family moved to Oahu to look after her grandparents. Her uncle was a rising surf star at the time and regularly competed in QS events. After watching him compete, Hennessy caught the competitive bug and entered her first Menehune contest at Haleiwa. After that, she began doing contests regularly, before eventually qualifying for the Championship Tour in 2019.

“I don’t think we knew what we were getting ourselves into,” says Hennessy. “From the moment I started competing I felt a deep passion for it. In some ways, I had the feeling of survival mode that I had in Costa Rica — I still bring that into competition today.”

In 2017, Hennessy’s dad got a part-time manager position at Namotu Island in Fiji, a stone’s throw from some of the best surf in the world. When COVID hit in 2020, Hennessy and her family found themselves in quarantine on the tiny island for nine months. It was a period when most of the world didn’t have access to the ocean. The Hennessy’s, on the other hand, had waves in spades.

“I was very fortunate that I was able to be in the water and surf every day,” says Hennessy. “I felt like I was going to come back on tour stronger than ever, but I think I put too much expectation on myself and I actually had my worst year after that.”

Although Hennessy didn’t get the results she was hoping for when returning to the CT after her time on Namotu, it gave her a chance to take a step back and examine her performance and her goals. She realized she was too focused on what she wanted to accomplish and wasn’t being fully present.

At the second stop of the 2021-2022 campaign, Hennessy embraced her new mindset and took home her first CT victory at the Sunset Beach Pro. The win had her sitting in the world number one position and proved that she is a serious title contender (she’s currently at number four).

“Hawaii is one of my homes and Sunset was one of the first places I (surfed big waves),” says Hennessy. “It wasn’t necessarily the win, but truly embracing being in the present moment that made it a special event for me.” 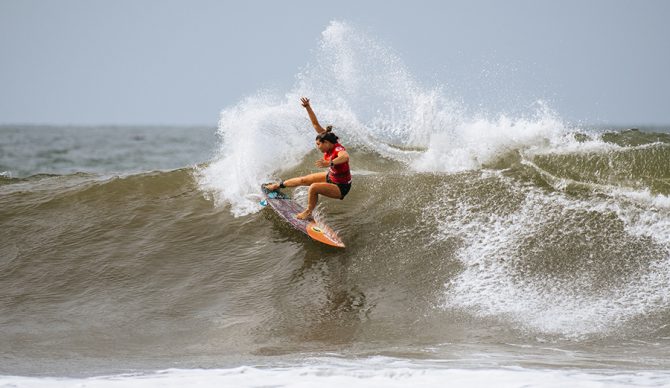 In addition to competing on the CT, Hennessy had the opportunity to be just one of ten athletes representing Costa Rica at the 2020 Olympic Games in Tokyo. She was proud to represent the country that helped her first fall in love with surfing.

“Being the first time for surfing in the Olympics was iconic and such a big steppingstone for the sport,” she says. “Coming out, I was more motivated and had a sense of what my purpose is when I’m surfing. I want to inspire that little girl in Costa Rica or around the world to get in the ocean and find her passion and what makes her happy.”

When Hennessy’s not in the water, she’s in the kitchen. Between her mom’s influence as a chef and a desire to eat healthy, the Costa Rican is constantly cooking up delicacies. She adheres to mainly a plant-based diet, heavy on fruits and veggies that allows her to feel her best, both on and off the water.

“Food connects us all as humans,” says Hennessy. “When you’re out in the ocean and things are uncontrollable, eating is a way that you can control what you’re putting in your body — there’s something so special about creating something in the kitchen. It’s like a therapy to me.”

Although Hennessy tries to stay focused on the present moment and not get ahead of herself, she has a few big goals. She hopes to finish the 2022 season in the top five and the ultimate goal is to return to the Olympics and someday win a world title. But more than anything, she wants to do her country, her family, and herself proud.