California Is Still My American Surfing Dream…Even After 19 Years 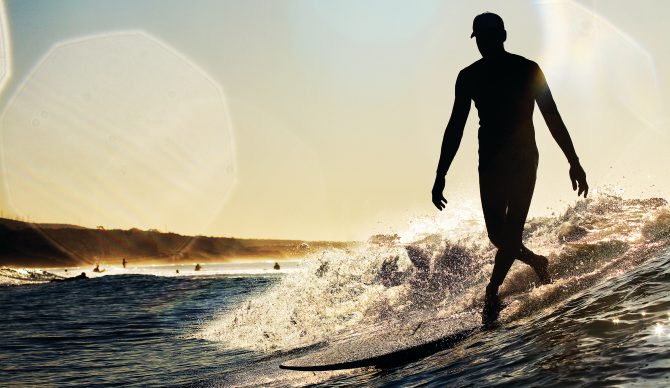 California. There’s something to it. Photo: JP Van Swae

Mired in Midwest winters, I would fantasize about another place, often writing out the word: “California.”

Then I’d just stare at it.

Years later, Don Henley, of the Eagles, would offer an explanation for my fantasies.

“I’ve learned over the years that one word (read: California) carries with it all kinds of connotations, powerful imagery, mystique, etc…, that fires the imaginations of people in all corners of the globe,” he told Rolling Stone.

He was talking about the allure of the band’s Hotel California album, which had for years provided the soundtrack for my West Coast dreams. Lying in bed, I would look at the Beverly Hills Hotel on the cover and study the lyrics while marveling at those harmonies and dueling guitar solos.

Then I’d wake up in the morning and drive to work, listening to the angsty song “Shit Towne” by the band Live.

I had visited California twice. The second time I wound up in a crowd of about 3,000 people outside the Santa Monica courthouse during the O.J. Simpson civil trial verdict.

When I went back to the hotel, I reflected on the very L.A.-esque pandemonium and thought, “I’ve GOT to move here!”

Maybe not L.A. But California.

Luckily, I was in the newspaper profession at the time, which – despite the sucky pay – offered opportunities to leave Shit Towne. I’d heard of San Luis Obispo only once – a wine commercial that incorrectly pronounced it San Looouie Obispo – a major faux pas with the locals, I’d later learn.

As charming as it was, I figured I’d experience the SLO Life for a couple of years, then move to a bigger news market.

The work was fun, and I had lots of friends, including my basketball buddies. But it was a curmudgeonly photographer who implored me to try surfing.

“Fuck basketball,” he said. “You can play basketball anywhere. You’ve got to SURF!”

What’s the big deal, I thought. You stand on a board in water. 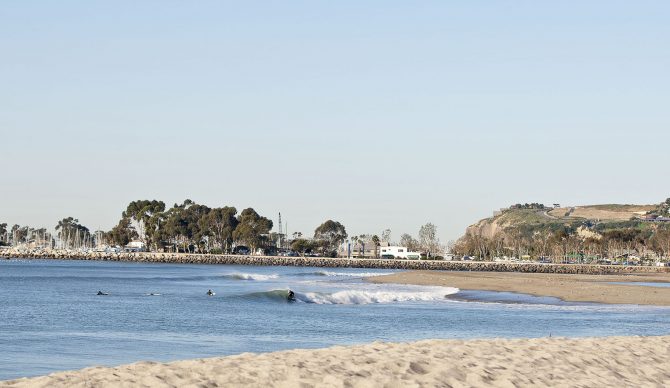 Standing on a board in water. Even small waves have a special allure in the Golden State. Photo: JP Van Swae

Also – and perhaps more importantly — I’d had a bad ocean experience during my honeymoon a couple of years earlier. This was before I knew that you don’t swim against a current, and surfing just seemed like another opportunity to barf after a near-drowning.

But, two years later, I decided it was time. I had just spent three months covering a death penalty murder trial and I guess I needed something to get my mind off abductions and shallow graves.

On my first ride, I stood up for maybe three seconds. But I was hooked. It wasn’t just standing on a board in water. It was feeling the energy of the wave. It was being connected to the sea. It was –

Ah, hell. I can’t really explain it. Can anyone?

But I know this. Suddenly, the notion of giving up quality of life just to work at a paper with a larger circulation seemed pretty silly.

This is my 19th year surfing. And, except for one trip to Florida, all of it has been in California.

But California is a big state. A great state.

Surfing Big Sur is like another country compared to surfing Malibu. And when you’re on a wave there, you look up and stare in awe at the magnificent meeting of mountain and sea. San Onofre has all that history. Santa Barbara County awes you with its point breaks. And Santa Cruz – I’m not sure if it’s a better Surf City than Huntington Beach, but the place combines great surf culture with freakin’ redwoods.

Yeah, sure. The cost of living here sucks. San Francisco, one of the great cultural Meccas of the world, is now overrun with techies whose average salary is $150,000 a year, driving up the cost of living for all others. But nobody said California was a utopia. That’s sort of the point of the “Hotel California” album.

Every time I hit the beach, I remember those fantasies I had about California so long ago. And if I’m sitting in the lineup and an Eagles song plays in my head, the mystique that Don Henley talked about doesn’t just fire up my imagination.