Candid Moments from the Opening Ceremony of The Eddie 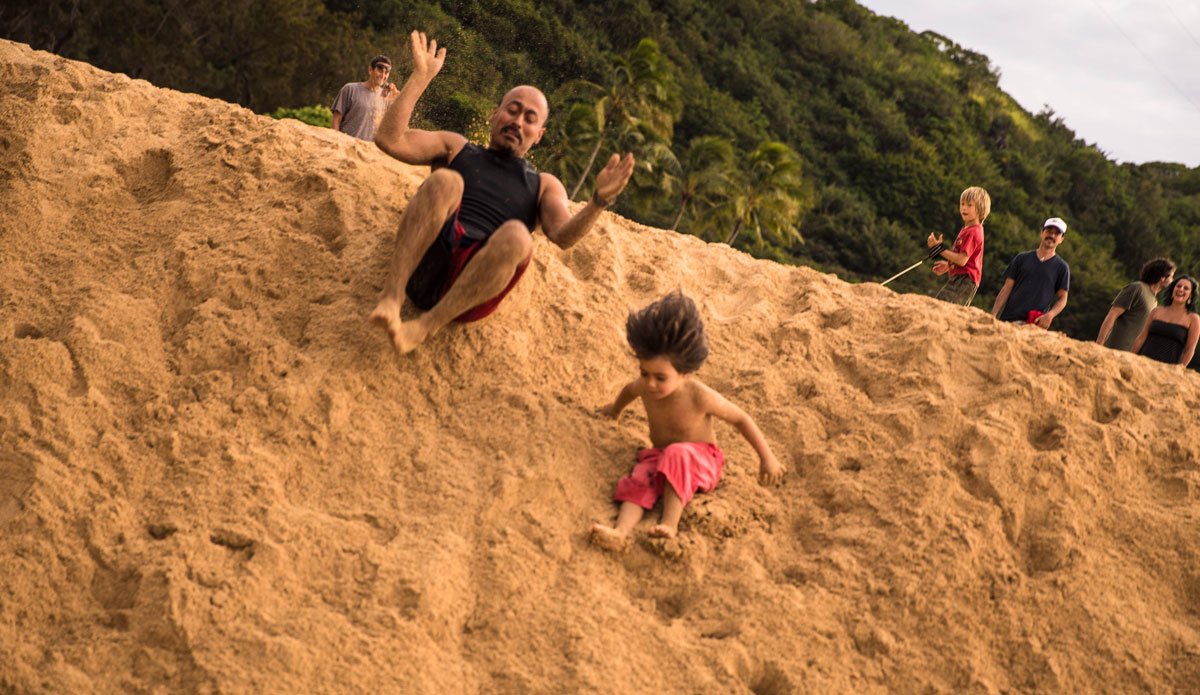 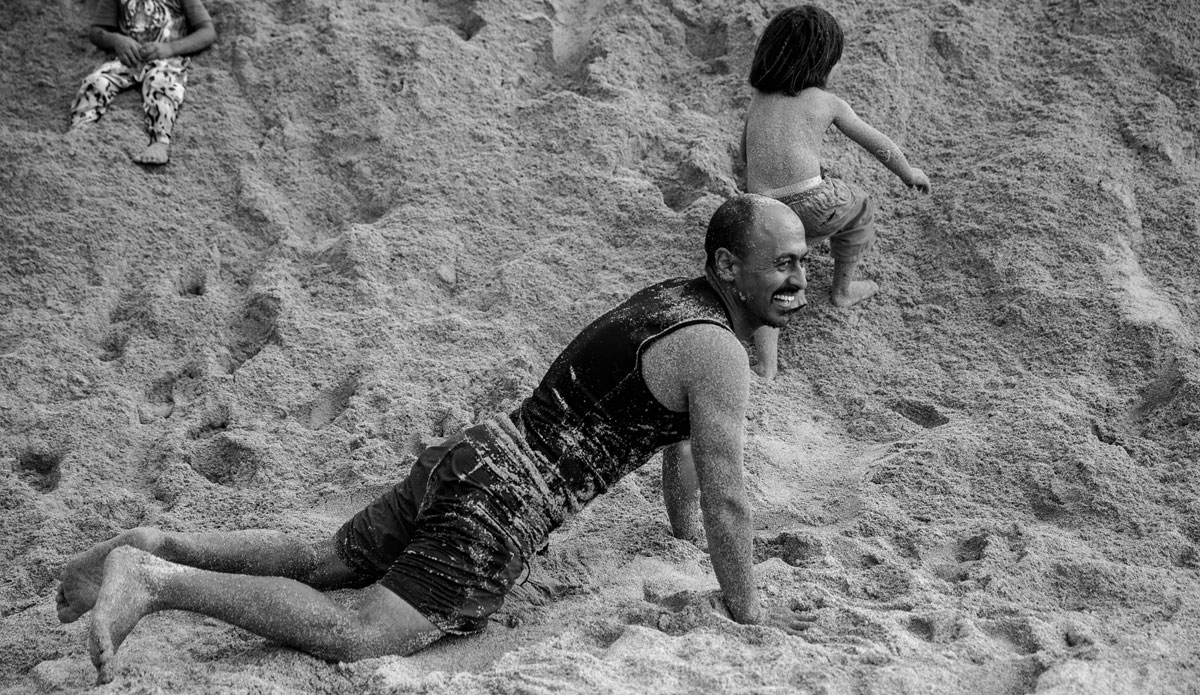 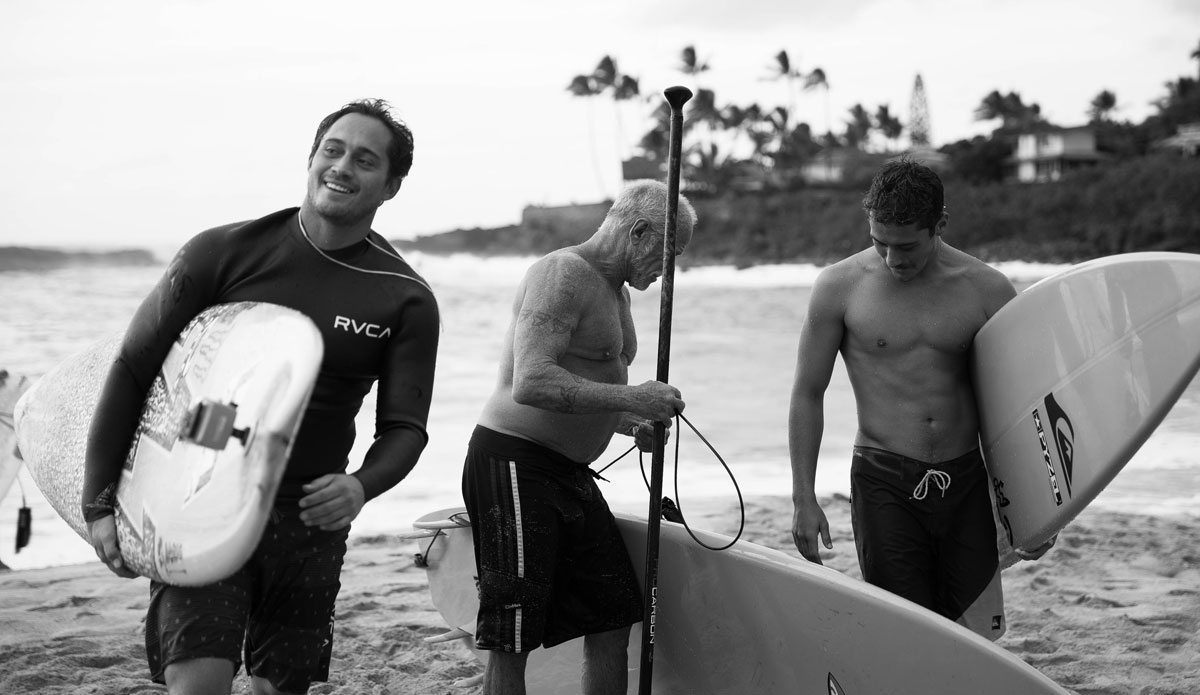 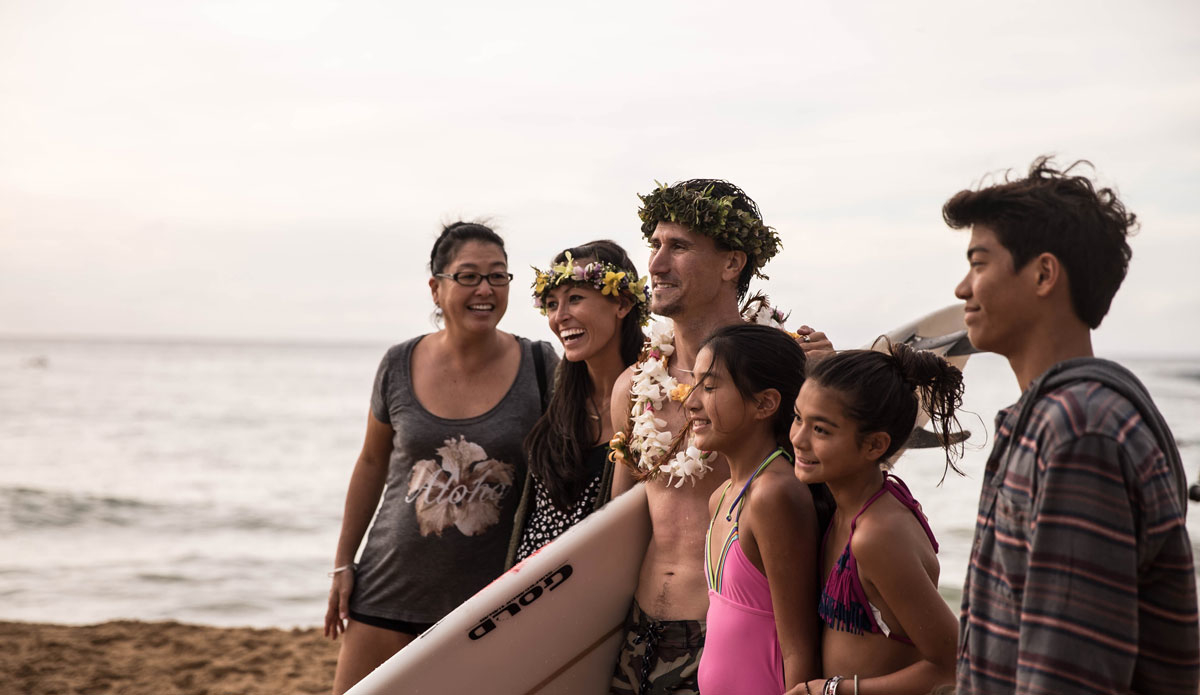 Cuz it's all about the family at the Eddie Ceremony. Aaron Gold takes a moment with his. Photo: Jeremy Searle. 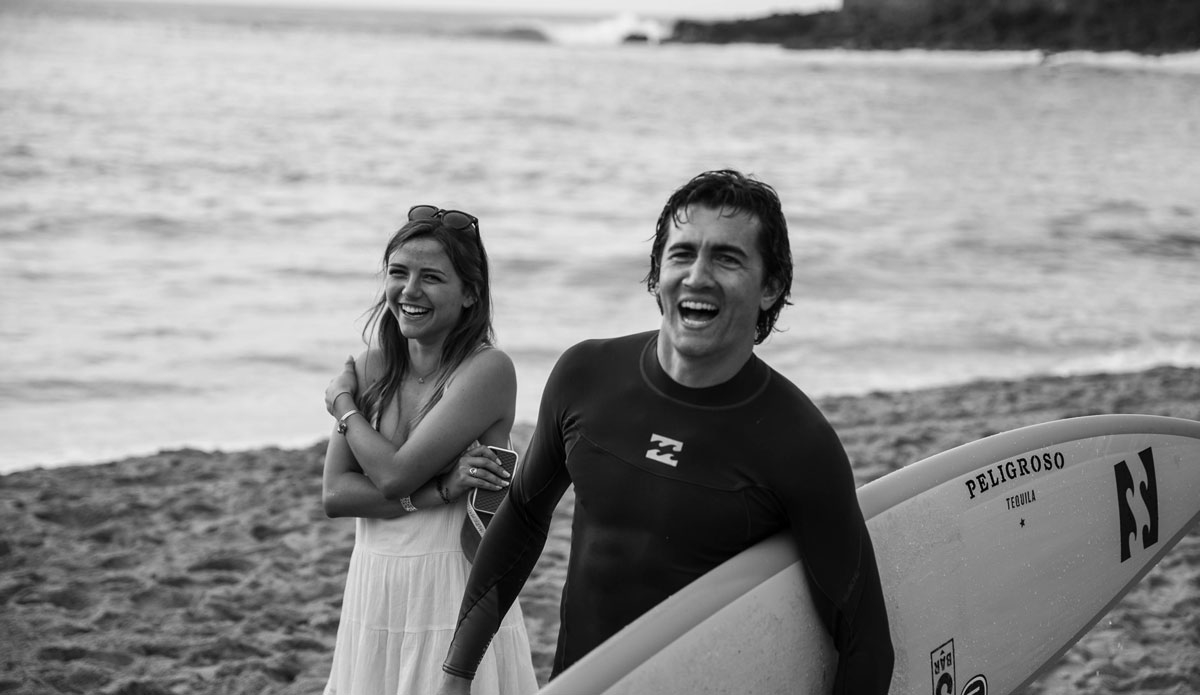 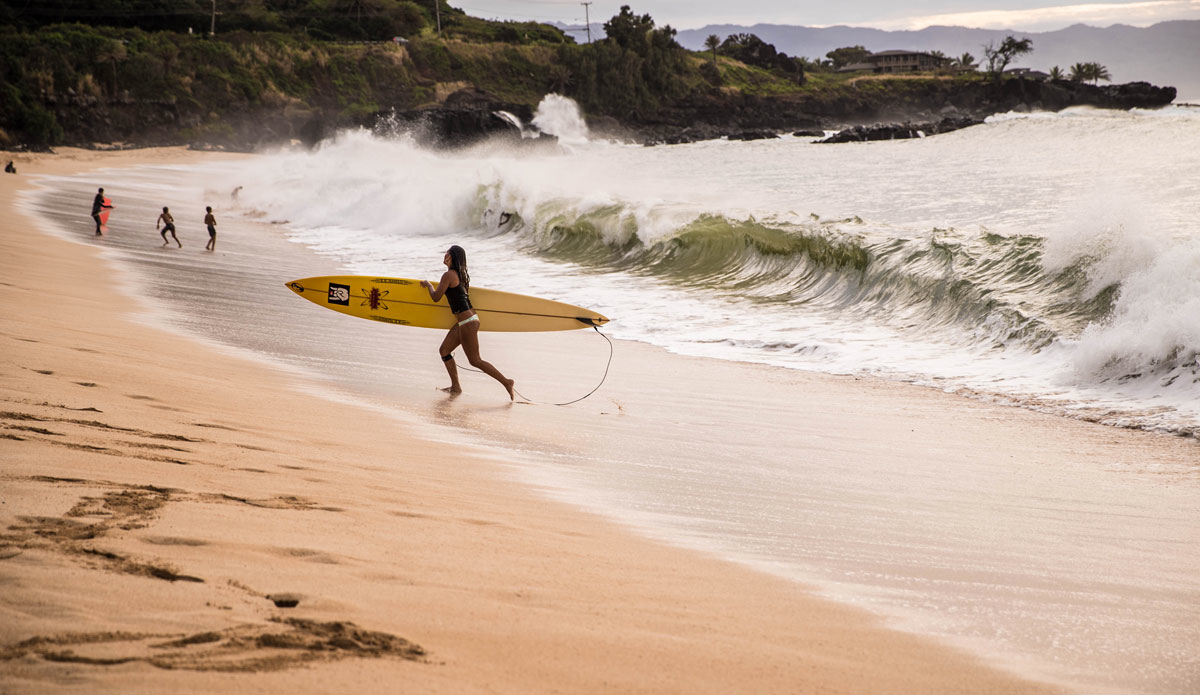 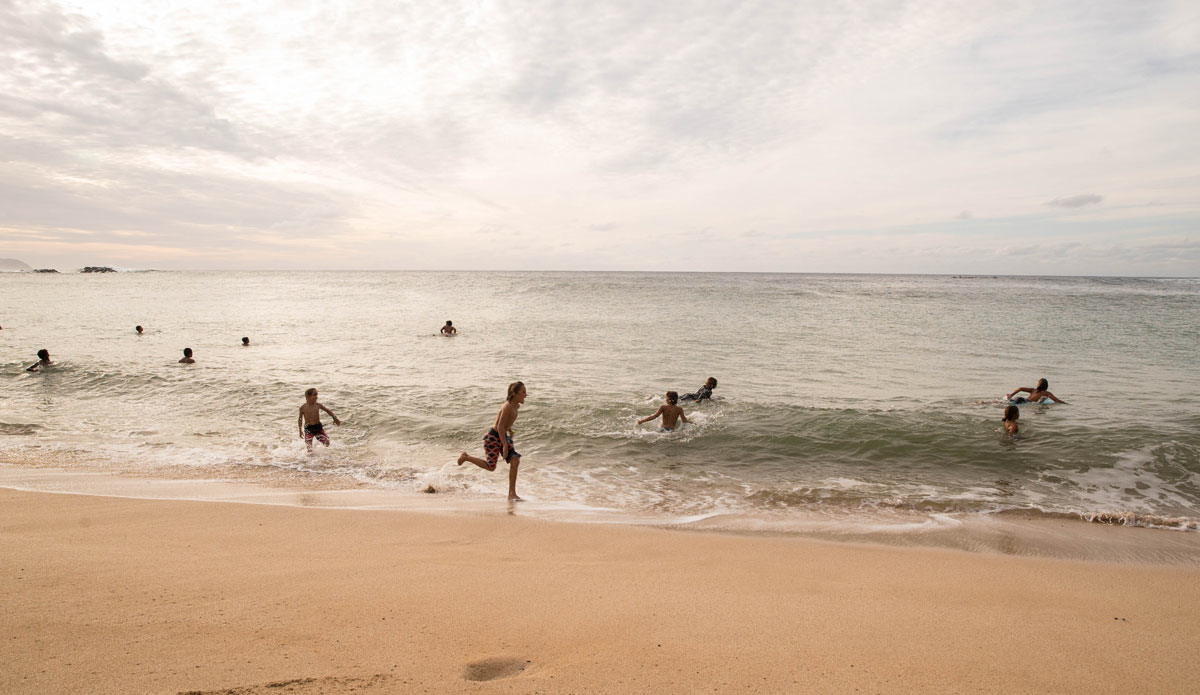 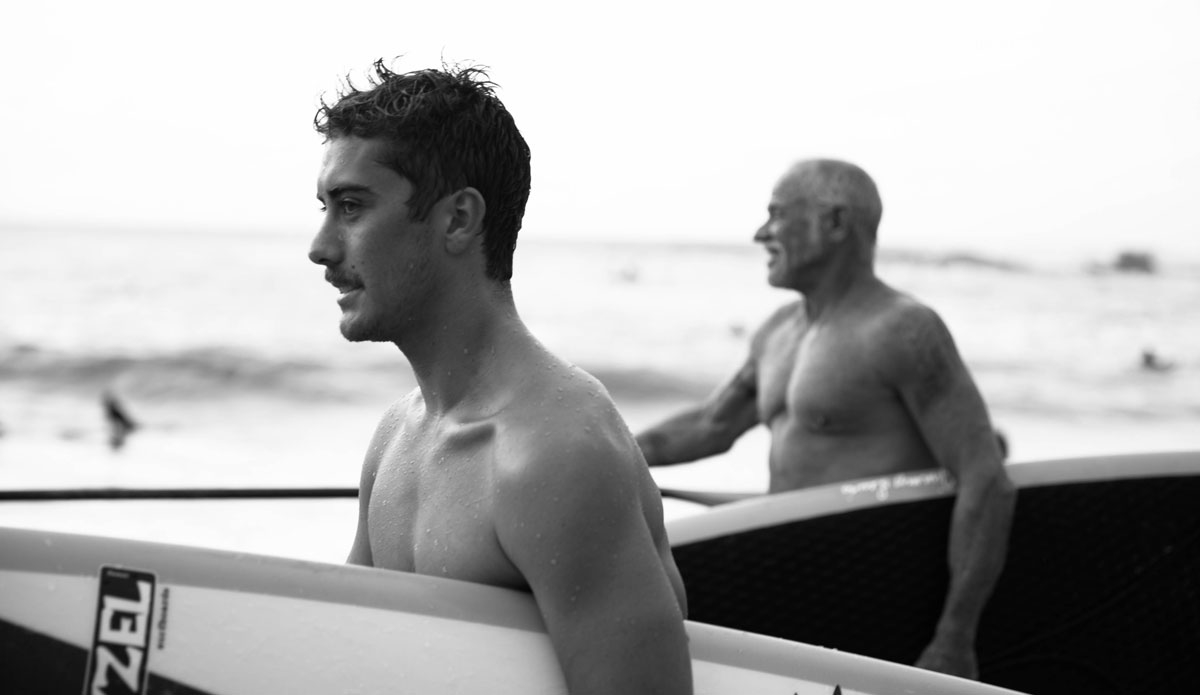 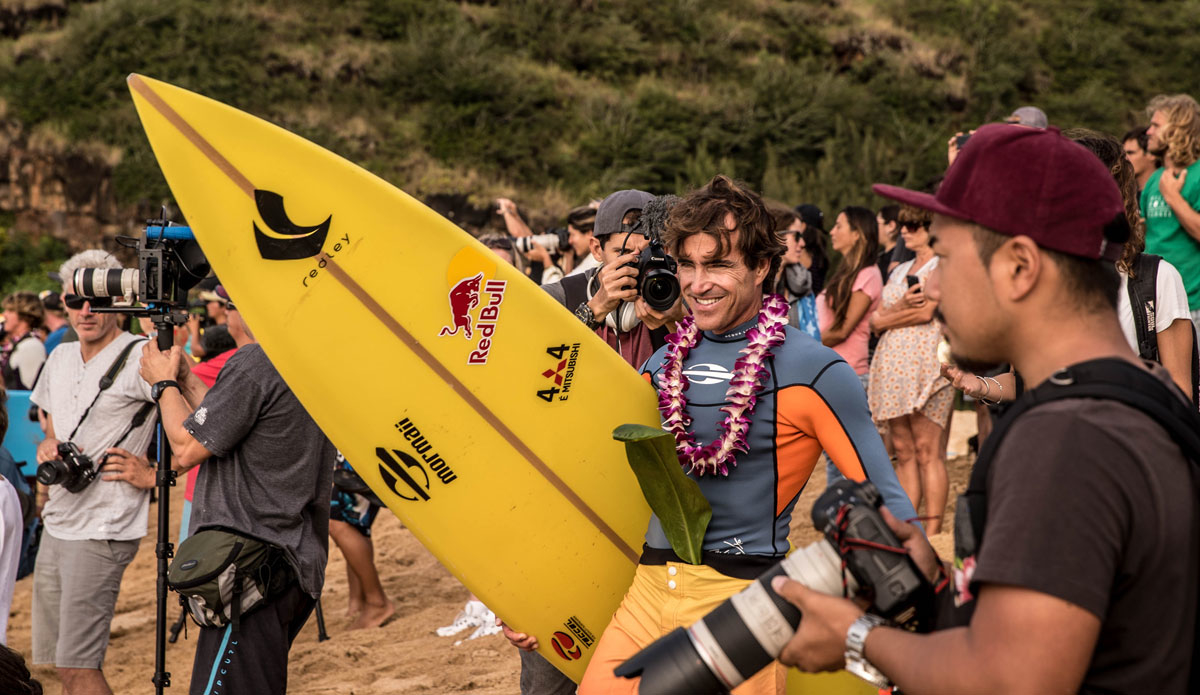 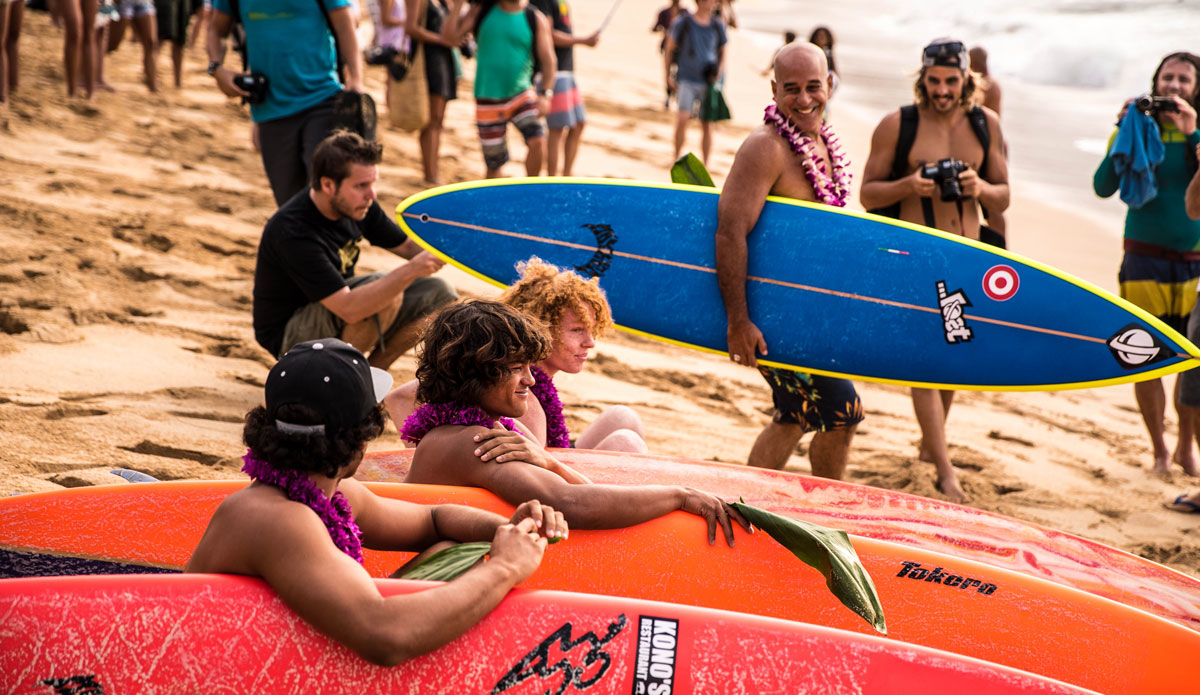 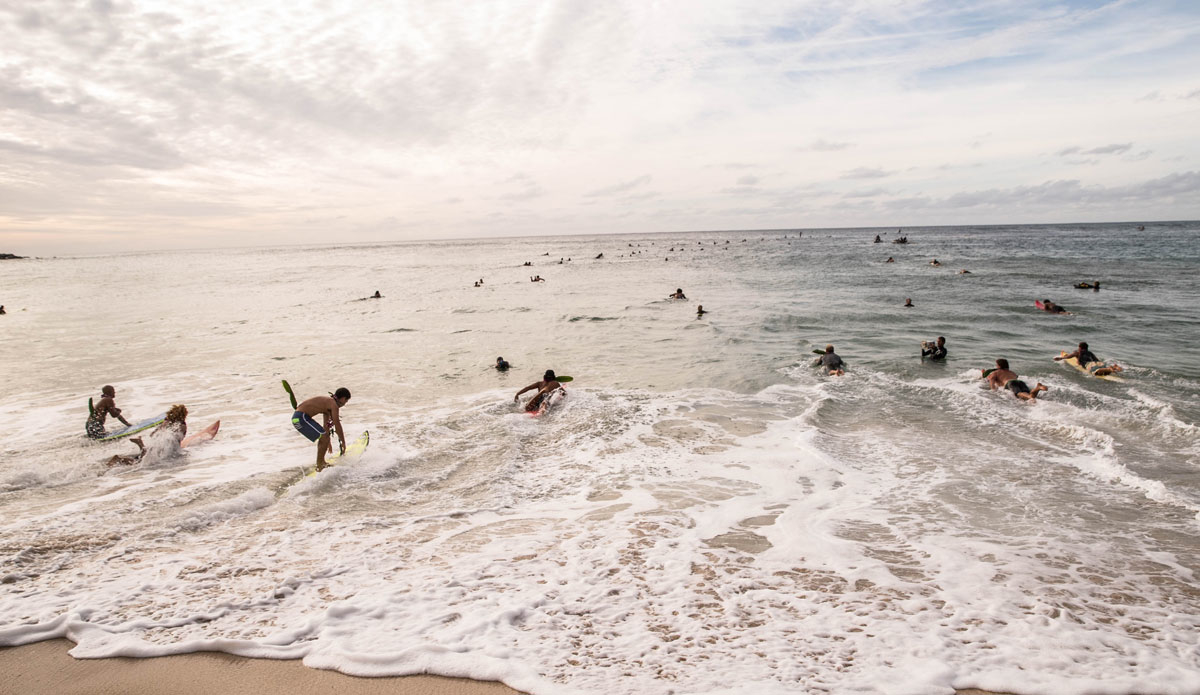 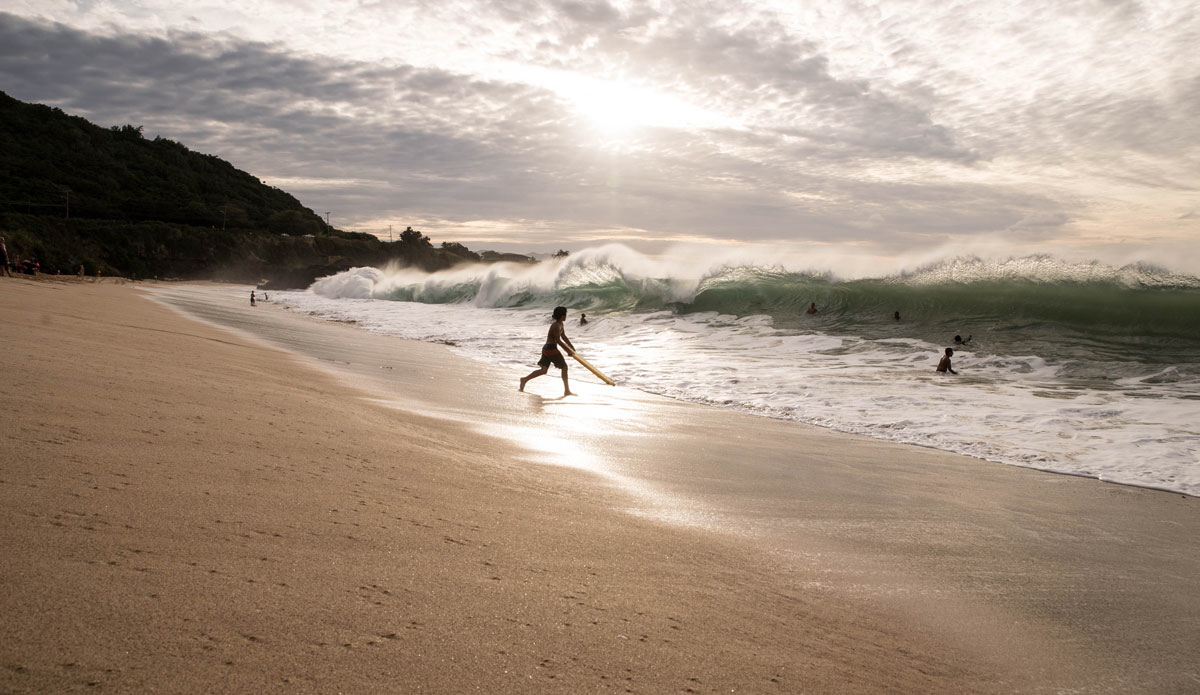 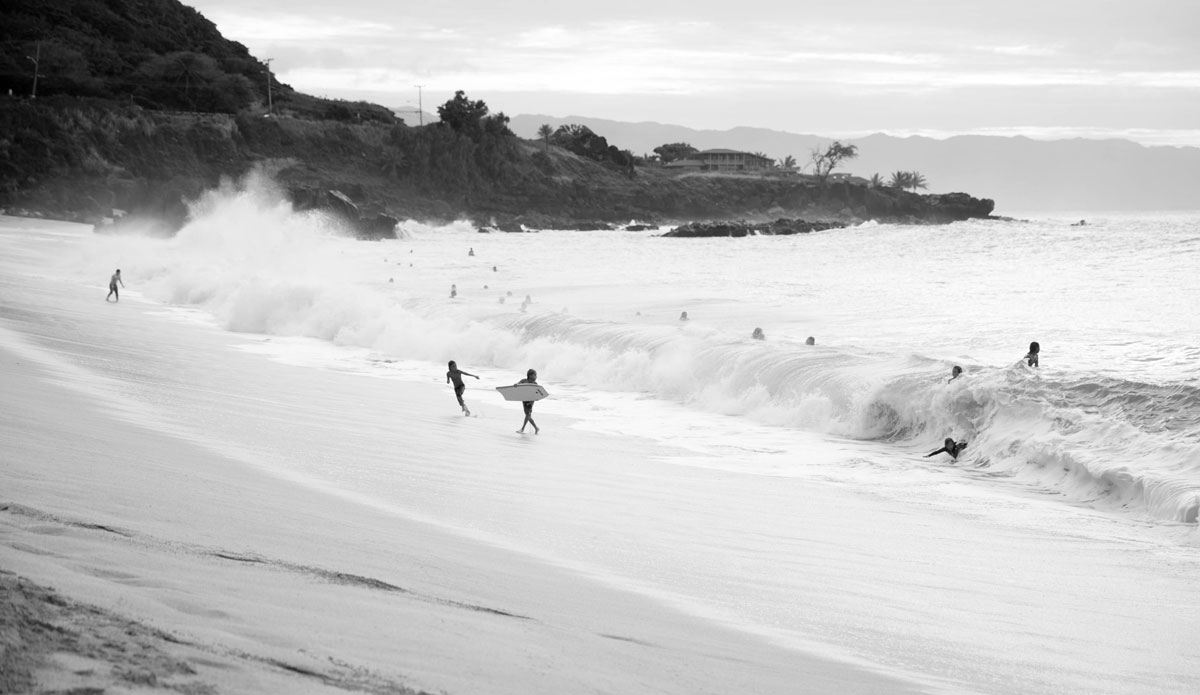 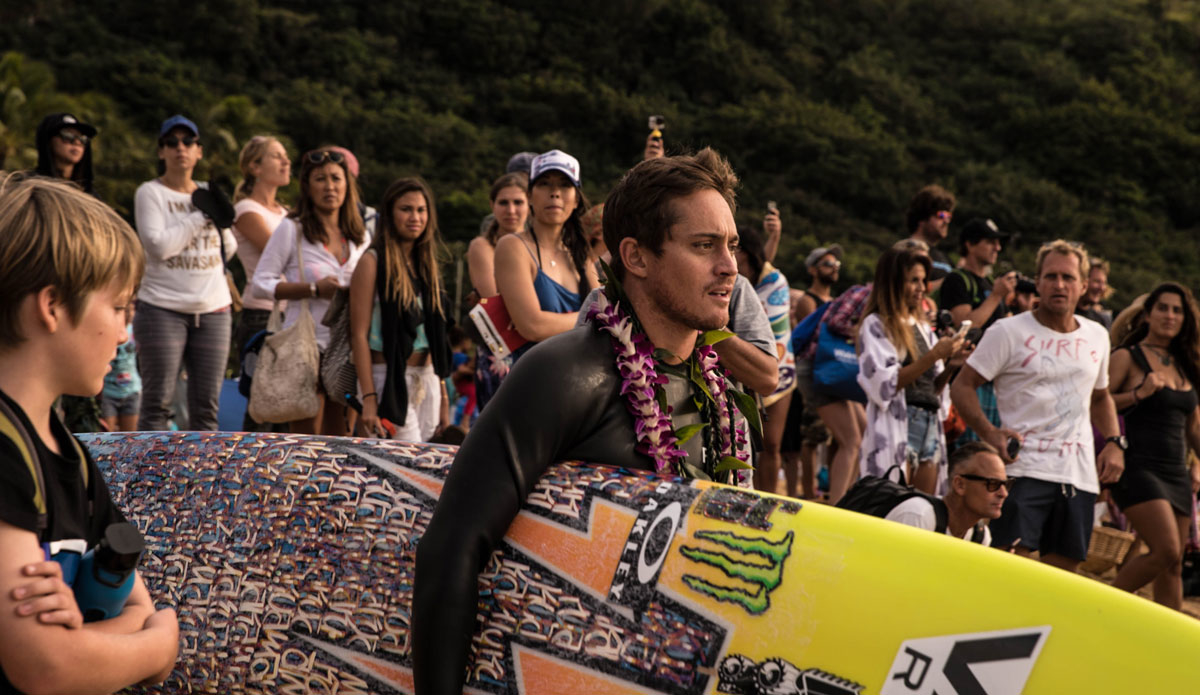 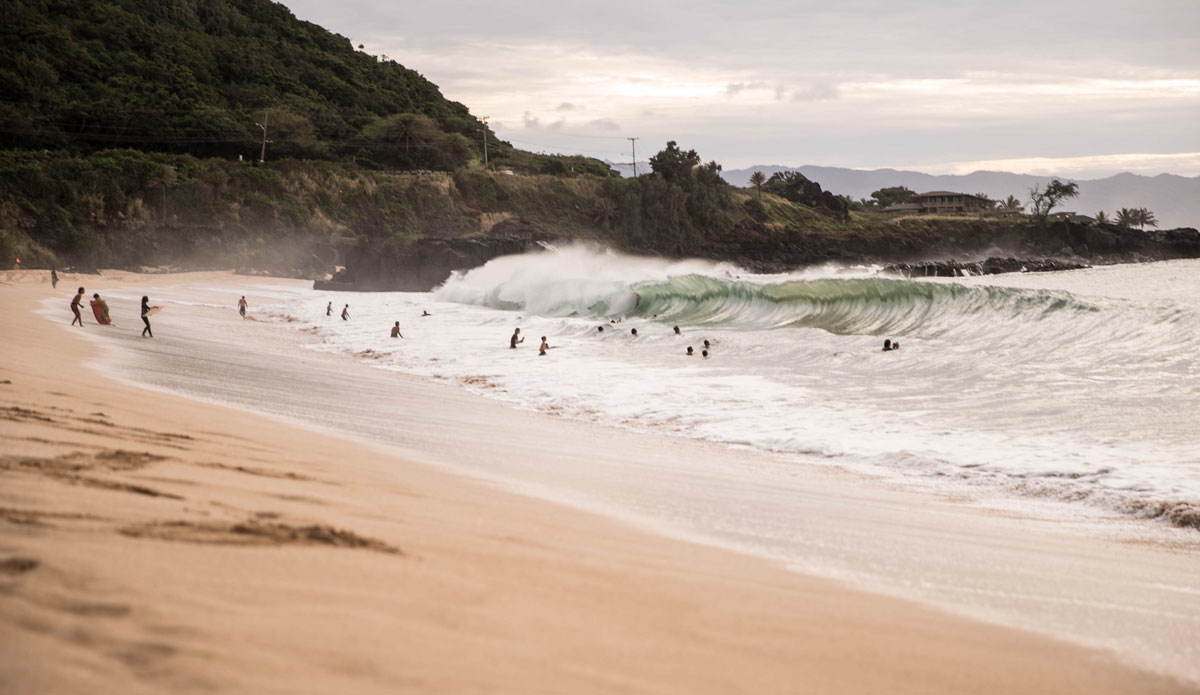 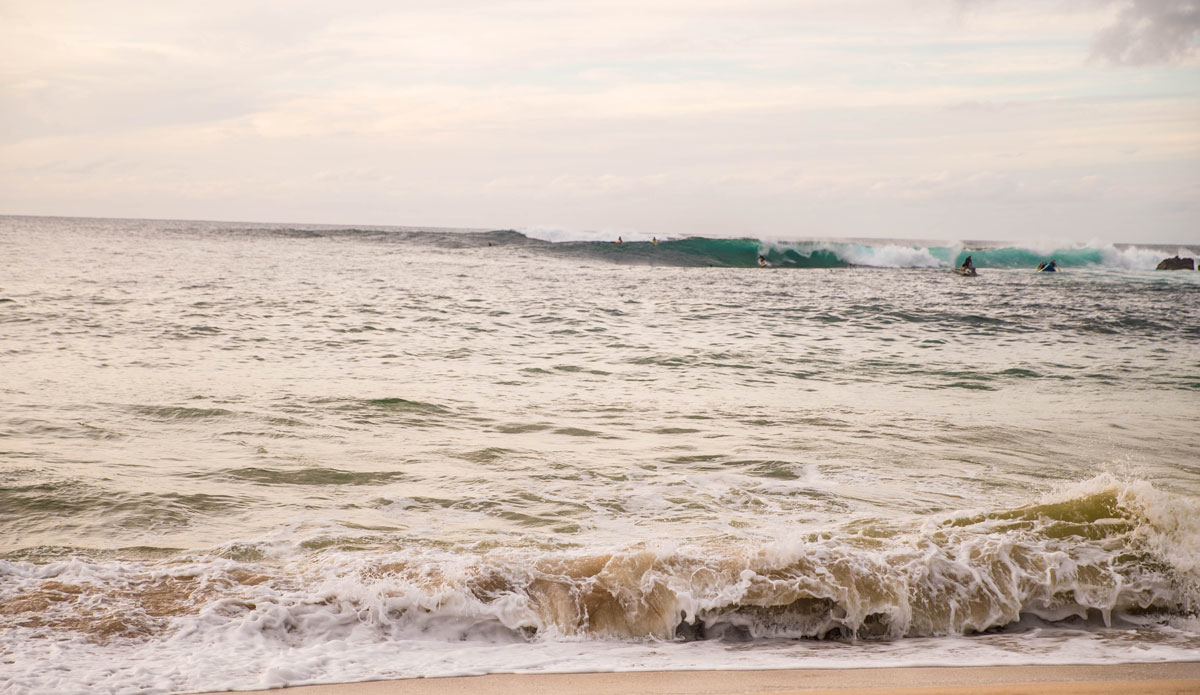 The waves started breaking right after the guys paddled out – so naturally – they surfed a few in. Photo: Jeremy Searle

The opening ceremony for The Eddie is an amazing thing. Amid the chaos that is December on the North Shore, a group of the best big wave surfers in the world gather each year at Waimea Beach Park to honor Eddie Aikau and everything he has come to represent. As someone who writes about surfing, it’s an interesting thing to be a part of– there is a certain gravity there that feels too sacred to interrupt for the sake of a few words.

Under a sky filled with high gossamer clouds, the invitees sat quietly with their guns laid out in front of them. It’s a gathering that honors Eddie and the entire Aikau family. It keeps room within its ranks for the ones that have died and the ones that have yet to come. Spectators mill around on the soft grass of the park, the ever-present sound of Waimea in the background, dogs straining at their leashes and children running between legs, the voices floating through the warm air filled with quiet respect. Many of the tourists came to catch a glimpse of one of their heroes, but stayed for the deep sense of reverence.

It’s a vastly different affair from any other event in surfing. From the outside, the sense of camaraderie that blankets the surfers is thick. While a trophy at the event is one of the most meaningful things any of the competitors could ever hope to achieve, it is evident that it isn’t the most important part – honoring each other and everything the event embodies is the focus, not beating an opponent.

The ceremonies feel more like a family gathering than the beginning of a contest. Too-small children play in Waimea’s heaving shore break while family members and friends laugh with each other, the perfect Hawaiian breeze whispering down from the valley, bringing with it the scent of Hawaii: a lingering mix of plumeria and bougainvillea, tinged with a salty presence that’s felt more than smelled.

While the North Shore is currently in the midst of a solid swell, Waimea has remained relatively quiet. A few bumps roll through Pinballs on occasion, but for the most part, Oahu’s most famous bay has remained relatively gentle. But as the competitors, family, and friends of the Aikaus made their way out to the circle forming in the middle of the bay, adorned in leis and holding Ti leaves, the horizon darkened slightly. As they floated in Waimea’s placid waters, a small pulse, its origins a thousand miles away, timed its arrival perfectly. From the sand, spectators watched as the invitees caught waves in with each other, dodging bobbing heads and fallen surfers, party waves on big wave guns. The waves remained for a half hour – just enough time for nearly everyone involved to catch a few waves – and then the ocean went quiet again. It was a fitting end to a ceremony that means so much to not only the people of Hawaii, but everyone with a deep respect for the place.

Since its inception, the Quiksilver in Memory of Eddie Aikau has only been held eight times. The one-day event only occurs when the waves at Waimea reach 20-feet, and this year, forecasters are eyeing up a potential swell of sufficient proportions that might make landfall a few days into the waiting period. So now the wait begins. The world will turn its eyes to the Pacific, watching for those waves that Eddie Aikau watched for – and with any luck, he’ll send them our way.