Caroline Marks: ‘I Want to Be World Champ, I Want to Change the Sport, I Want to Inspire Young Girls’ 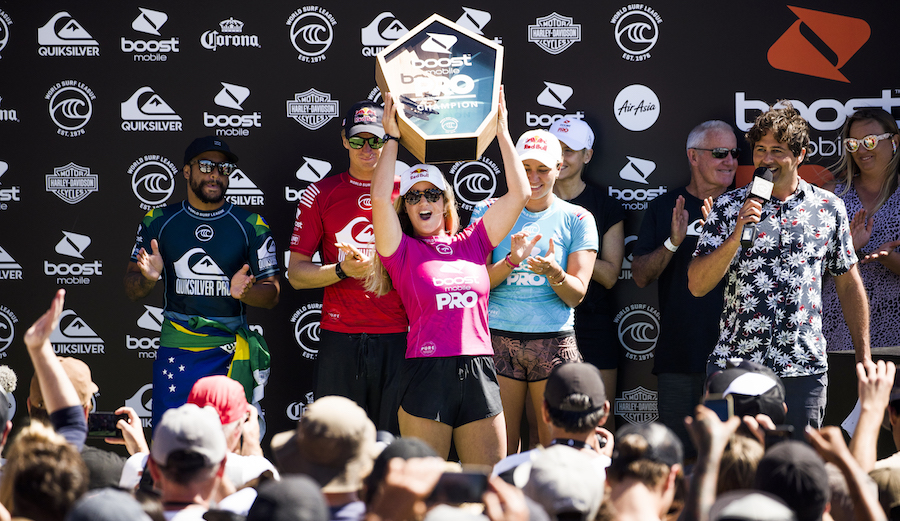 Before surfing a single heat as a full-time member of the World Surf League Women’s Championship Tour, Caroline Marks was already breaking barriers. Building on early competitive success, in 2017 Marks became the youngest person ever, male or female, to qualify for the CT. She was only 15.

The accolades have since piled on. At the conclusion of the 2018 season, Marks was named rookie of the year (the youngest, again, in history). And at the first stop of the 2019 CT season, the Boost Mobile Pro Gold Coast, Marks took out both seven-time defending world champion Stephanie Gilmore and three-time world champ Carissa Moore.

The parallels one could draw between the ascension of Stephanie Gilmore in the early 2000s and Marks’ recent competitive success are difficult to ignore. Circa 2005, Gilmore won the Roxy Pro Gold Coast as a wildcard, defeating then six-time world champ Layne Beachley. She was 17. Earlier this month, Marks eliminated Gilmore at home and went on to win her first CT event, also at age 17. It’s downright poetic.

In the wake of her historic win, I caught up with Marks to talk about her competitive goals, Olympic dreams, giving up competitive barrel racing for surfing, and managing pressure.

First and foremost, congrats on the win on the Gold Coast, where’s your headspace at?

Thank you so much. Yeah, I’m on Cloud 9. It’s absolutely incredible. It’s been the best week of my life. I feel on top of the world, it’s pretty cool.

So, you defeated Steph Gilmore in the quarters who, of course, is the defending world champ and Gold Coast resident. I can’t help but point out that Steph first burst onto the scene winning the Roxy Pro Gold Coast in 2005 when she was 17. You beat out the seven-time world champ also at 17. What are your thoughts on those parallels maybe foreshadowing your career a bit?

Steph is such an incredible surfer and I’ve looked up to her since I started surfing and it’s pretty funny to be surfing against her now. I knew it was going to be a super-hard heat. I’ve actually been to her house and it’s literally looking at D’Bah, so I was like “Woah, she surfs here every single day.”

I just felt super confident the whole week. I stuck to my own game plan and was like, “Alright, I’m just gonna do what I think is best.” I talked with my coach and created a really good game plan and just went out there. I think coming up against someone like Steph you have to do your own thing and be really decisive with what you’re trying to do because she’s such a smart competitor and surfer. I really had some tough heats to get to the final and to win it made the win feel that much better. It’s the highlight of my career so far.

Being the first women’s CT event to offer equal pay, you came out with a $100 grand in your pocket. What does that feel like to be 17 and $100k richer?

I don’t know if it’s fully sunken in. It’s super surreal and I’m trying to enjoy the moment. I wouldn’t have wanted it to happen any other way. It’s so cool to see how far women’s surfing has come and thanks so much to the WSL, it’s incredible to be part of. I think it’s gonna keep on getting better.

But, yeah to be the first one [on the women’s side] to win $100 grand is absolutely amazing. I just want to inspire young girls and show them that, ‘hey, this is just a number,’ but also that you can never dream too big. 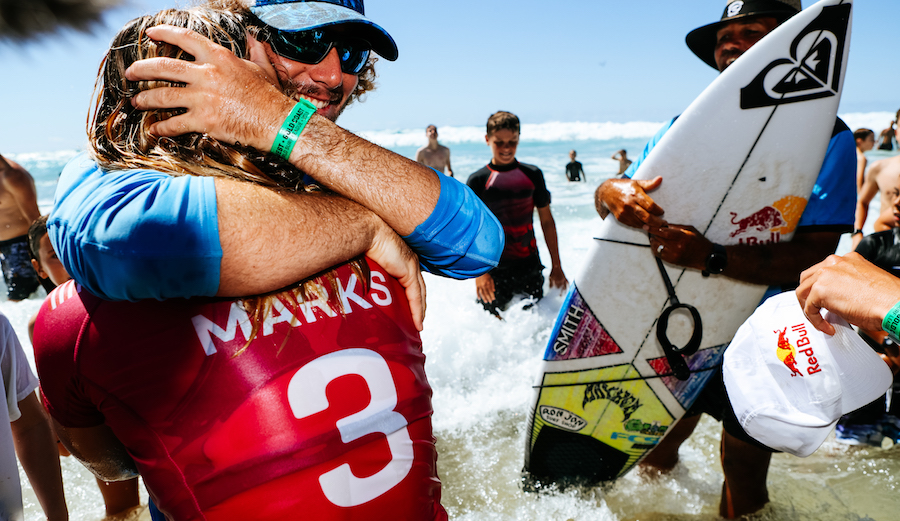 It was an emotional win for the 17-year-old. Photo: Cestari/WSL

The stakes are a bit higher this year since it’s an Olympic qualifying year. Do you have Olympic dreams?

Yeah, for sure. I really want to make the Olympics. That’s definitely high on my goals list, especially since it’ll be the first time surfing will be in the Olympics. It would be cool to be a part of that and it’d be an honor to represent the USA. I’m definitely off to a good start. Hopefully, I can keep it going. I feel really good about this year, but I am taking it one event at a time. Not trying to look too far ahead. But, yeah, being in the Olympics is something I want to achieve, 100 percent.

Being the youngest person ever to qualify for the CT, and now a win on the Gold Coast in your second year on tour, talk isn’t if you’ll win a world title but when. Does that put added pressure on you? How do you deal with those sorts of claims?

I think it’s super flattering. Definitely winning a world title is something I think I can 100 percent do. But, I’m not gonna put any pressure on myself whether it’s this year or in a couple of years.

I’m just trying to learn as much as possible. I know I have a lot to learn. But, I also know my ability and what I can do, and if I work super hard and stay motivated, I think I can get there. I don’t think it adds pressure. I think it makes me even more confident having people that believe in me. But, I also have my inner circle and I listen to them, and that’s all I need.

I was struck by what you said about inspiring young girls to “dream big.” When you were young was there a time when you said to yourself, “I want to be a professional surfer. I want to win a world title. I want to be the best surfer in the world?”

Actually, the first year I competed out in California was the USA Championships at Lower Trestles. I was 11 and I did the U12 division. I just remember this was right around when I started. It was kind of the first big contest that I did. My older brother competed, and I used to get dragged around to contests. I used to horseback ride and on the weekends we’d go to my brother’s surf contests and during the week we’d go to horseback riding tournaments. So, I would always be there and I actually hated it. 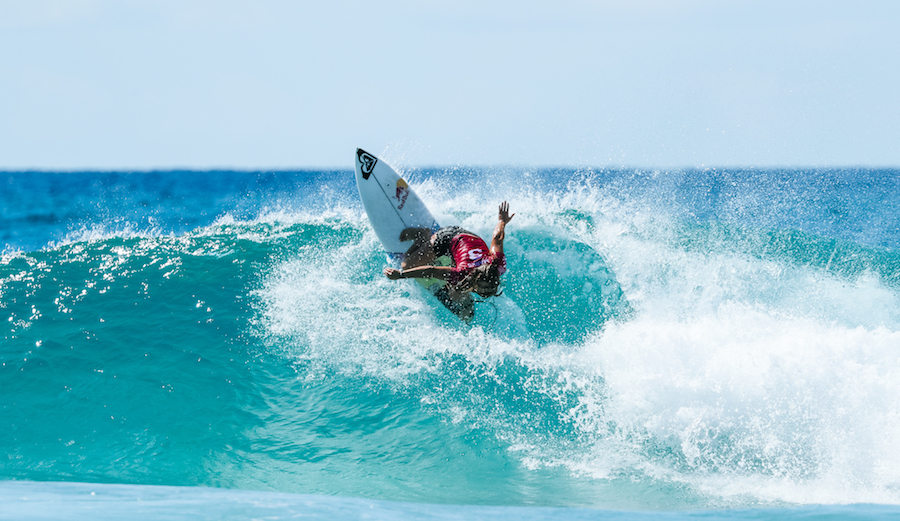 Marks’ backhand attack has been compared to that of other famous goofy foots including Occy. Here’s Marks going vert. Photo: Cestari/WSL

I remember the first time I competed I actually lost. The first bigger event I did was the Rip Curl Grom Search at Uppers. I lost and I hated losing so much. I remember saying, “I hate this, I don’t want to do this anymore.” But, everyone was telling me to stick with it.

I went out to Lowers that year and I won the U12 girls. It was my first time being chaired up the beach and it gives me goose bumps talking about it. I love this feeling. I got all this attention. I remember in that moment I was like, “I want to be the best in the world. I want to change the sport. I want to inspire young girls and I want to be world champ.”

So, was that the moment you gave up horseback riding, too?

Yeah (laughs). It’s funny because my parents always ask me that. My mom is always saying, “You literally dropped [horseback riding] so fast.” Because that was all I did, all I did, all I did, you know? I didn’t really surf that much. I used to get dragged around to all the contests with my brother and I still was just over it. I was like, “No, this is my brother’s thing and mine is horseback riding. That’s just the way it’s supposed to be.” And then I just kind of started surfing a little bit behind the house after school and I fell in love with it. And I think the winning part of it – I’m just so competitive it’s insane. Feeling on top of the world felt so cool.

It’s weird huh? Horseback riding is so different. It’s so bizarre thinking about how I used to do that. And I loved it. I thought it was actually what I was gonna do.

But, I think for me, I always wanted to be like my brothers. I used to wear boardshorts and, like, a top. I used to think whatever they did was cool and I wanted them to accept me and think I’m cool, because I grew up with all boys and their friends. I think that’s why I started surfing. And when I first started they were so critical of me. I used to come in crying because they’d say, “You need to surf like a boy. You can’t put your hips that way,” or whatever. But, I thank them now because it really pushed me and made me the surfer I am today.