Code Red 2 From the Water: Diego Balestro Filmed the Giant Swell While Swimming

That Diego Balestro was in the water for the Code Red 2 swell in Tahiti was a minor miracle. That he shot most of the footage whilst swimming is almost ludicrous. Yet for the last few years, the little-known Brazilian water videographer has been placing himself in some impossible positions in some of the world’s heaviest waves. From ‘Chopes to Nazare and Mullaghmore, Diego is a man following a dream.

However, for the June 2022 swell, the biggest obstacles to chasing that dream didn’t come from the rare 40-foot waves that were battering Teahupo’o, but from the local police. The night before, the authorities had decreed a Code Red for all Tahitian waters, the first since May 2011, with all boating operations being suspended.

Most of the local big wave surfers and international visitors had decided to ignore the ban, leaving the private docks way before dawn on their Jet Skis. Diego managed to get onboard just one of the three boats that left the harbor in the morning. He shot from the channel, until the boat operator was forced to bail as the police showed up issuing heavy fines.

Back on land, he slipped back into his house and grabbed his waterhousing, fins, and life jacket, and placed them in an ordinary shopping bag. The police stopped him twice, but he sufficiently disguised his intent and managed to arrange a covert Jet Ski pickup back to the lineup.

Once in the channel though, he was on his own. He swam the lineup for rest of the afternoon, a feat that deserves recognition in itself. “I wasn’t in the best position for some of the waves, as I was just concentrating on surviving,” laughs the likable Brazilian. “But I stayed to the end and captured Noa Bechen’s wave, which was one of the best and last of the swell. When I eventually made it back to shore. I had to evade the police again, but it had to be done. I had waited all my life for that day.”

The 35-year-old grew up in the southern Brazilian city of Porto Alegre. Despite being located 100 miles inland, he developed a passion for surfing. In 2012, he picked up a GoPro and started filming his mates from the water. “The mix of swimming, adrenaline, and being close to my friends was intoxicating. I was hooked,” he said.

He did the next few surf seasons in Indonesia filming his mates, before traveling to Tahiti for the first time in 2015. It was here he made friends with the next generation of local rippers that feature in his Code Red 2 film, above (seen exclusively here on The Inertia).

“Leaving for that trip, my mother called me back, thinking that I had forgotten my surfboards,” said Balestro. “I said, ‘It’s all about the filming now. That’s where my life is headed.’ She thought I was crazy.”

After further experience at Brazil’s big wave slabs, plus some safety and rescue courses, he headed to Nazare in 2019. The first winter he didn’t swim the big days, but typically, his passion and irrepressible personality made him loads of friends. Last year he returned and was often the lone filmer swimming on the big days. On the biggest swell of the season in January 2022, filming from the ski, he managed to capture Justine Dupont on one of the best waves caught last year.

He also spent a chunk of that winter in Bundoran, Ireland the surf town closest to Mullaghmore, and where he has returned now to use as a base for the upcoming European winter.

“When I arrived at Bundoran, I had no friends and no car,” said Balestro. “I saw on the maps that it was too far to walk from town, so I hired a bike and rode there. I then asked a stranger where the surfers jump off and I paddled out.” On the way back, he suffered a flat tire and had to walk the last two hours, through the driving rain. “I was happy though. I had shot Mullaghmore, and survived. That was huge for me.” 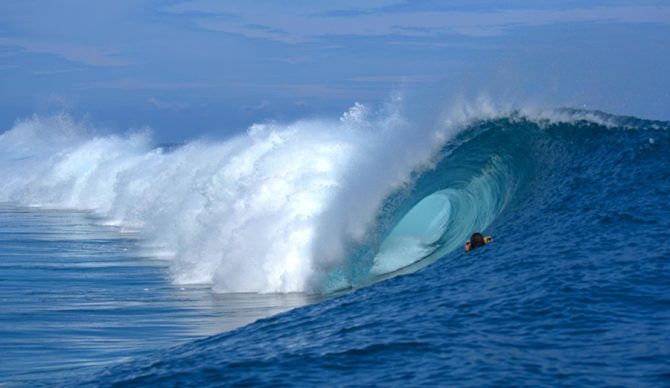 “We’d see this crazy Brazilian, walking or cycling to Mully, jumping off the rocks and then swimming on the biggest, wildest and heaviest days,” said Taz Knight, one of the current chargers at the wave. “I mean this place is beyond hard work, and that’s with a ski and surfboards. He’s doing it for the love, and he’s damn good at it. He’s won everyone over here with his passion and commitment.”

Like last season, Balestro is currently working in a surf hostel to pay for his accommodation, cleaning the rooms and the toilets, to keep the dream alive. He aims to target Ireland and Nazare this winter and head to Shipsterns in 2023. At the end of year, he hopes to collate all his best footage from the last few years and make another movie.

“This is my dream and I’m loving every minute of it,” he said. “And the best bit is the humans you meet. Waves pass, but the friendships last forever. That’s what makes my soul happy. That’s why I do it.”