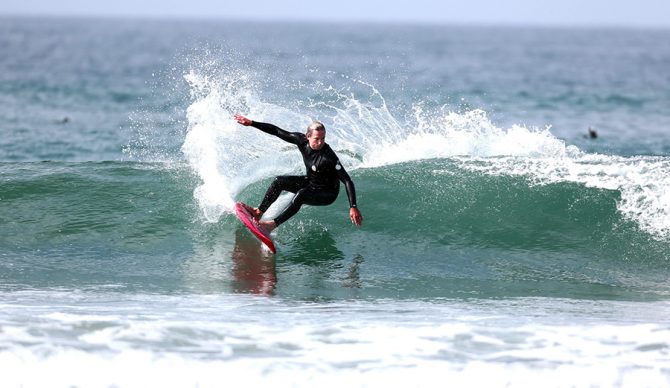 Colin McPhillips knows how to turn a surfboard. Photo: Surftech

Editor’s Note: This feature was made possible by our partners at Surftech.

Colin McPhillips is one of my favorite surfers. He’s won three world titles and to surf with him is to truly understand style. He’s carved out a life in the ocean all while raising a family that’s completely devoted to the sea. And he’s a Baja adventurer to the core – he knows every nook and cranny of the peninsula like the sunspots on the opposite side of his palm. The man has made as many trips down through the dusty Mexican highways in search of waves as anyone in Southern California. To me, he personifies everything great about riding waves. We had a chat recently about his Baja sojourns and what he’s been riding – namely the new Surftech line of Gerry Lopez boards.

So what have you been up to? On the hunt, per your usual?

I’ve been chasing waves in Baja, for sure (laughs). I went down April 1 for a two week run and got to Scorpion Bay and the East Cape for Easter and scored fun waves. I came home and ended up flying back down with my oldest son and a few friends – it was going off and it was my birthday. We scored really fun waves again during that first south swell that hit the beginning of April. I’ve been at home the last few days surfing trestles and San Onofre, riding the new 11’0″ Donald Takayama Glider.

We sort of made it through the heaviest part of COVID (hopefully). What do you have planned this season?

I’ve got a couple of good trips set up with private coaching back down to the East Cape. As of right now,  my plans are to continue to get in the water every day no matter what the conditions and hopefully things start loosening up. The places I usually look forward to going to like Fiji I can’t go, it’s shut down.

How has going to Mexico been?

Mexico has been very strict until recently. There’s been a non-essential travel ban but they’re not really enforcing it now. Rewind a year ago and Mex was shut down. A lot of the little towns, there’s no medical attention. It’s a 3-4 hour drive to get help. There were roadblocks and nobody was getting in or out. They shut down cigarette and alcohol sales,  it was full bootleg style. Last June, they started to open back up. It was still a non-essential travel ban but they consider tourism essential. I went back to Scorpion Bay and it was a ghost town. As of lately, they’re still very strict, everyone in a mask, hand sanitizer at all the shops, everyone was very responsible. The podunk stores in the middle of nowhere have machines that took temperatures. They had to be that way because of the lack of medical attention.

Were you ever worried about driving alone down there when it was closed down? People can get desperate.

Not at all. I really enjoy the driving through Baja. All of it is enjoyable, there’s nobody on the roads, not a lot of cars, nobody going fast. I passed two cars in two days going down last summer. It was actually really special because of how empty it was. It’s starting to open back up now. Salina Cruz was lighting up with the last two swells. It was closed and you had to boat into places. But the last swell there were 60 guys out. I think the lockdown is over.

You mentioned you’d been riding the new Gerry Lopez line in Mexico a lot?

I’ve been using the Gerry Lopez Pocket Rocket 7’4″ and the Squirty 6’4″ as my two go-to boards while roaming the peninsula. They were the perfect match to the long walls of the various point breaks I surfed. I chose which to ride depending on the size of the waves. They both linked the speed, power, and flow I was looking for on every wave I surfed. The new Fusion Poly material by Surftech is seriously durable and they could take a beating on those dusty roads.

It’s pretty much his quiver of favorite shapes, right?

Yeah, I actually enjoy the whole line. The Squirty is what I’ve been riding the longest and most. It’s got that Gerry Lopez gunny look to it but it’s not gunny at all. There’s plenty of width, it goes fast in big waves and small waves. It makes a mushy point break feel like you’re going extra fast and it’s easy to paddle. I had it set as a twin with a small trailer. It has this easy looseness but the stubby fin in the rear gives it the perfect feel.

When I got back, I used the Little Darlin at really good Rincon. Talk about a fun board. I used the 7’4” version and approached it like a midlength. It just had super down-the-line speed and made it feel like a proper wave with that long wall stretched out. You could do big turns and it made it feel like J-Bay. You might be surfing Trestles or Rincon but a board like that makes it feel like you’re riding  an A-plus-plus wave. I know I’m not him but I’m feeling like Tom Curren at J-Bay on these boards.

What do you like in the line as an all-arounder?

The Midway – it’s the new midlength. I’ve been riding the prototype 7’6”. It’s gonna be a good all-around board for more of a beginner up to advanced. There’s a good amount of foam, it’s wider , a good intro up to the advanced surfer that wants to ride a good point break on it. I like midlengths. I ride them at Trestles a lot. The Midway paddles like a longboard and turns like a shortboard.

The new Gerry Lopez longboard, the Long Haul. It has great wave-catching ability and it’s faster. It makes it easier to stand up for learning. It makes learning so much faster than trying to hop on a little board. Go right to the Long  Haul, a nine-foot to 9’6″. It’s a great all-around long board, a single fin with no bells and whistles. Advanced surfers can still whip it around. It’s just a simple, good-riding longboard.

What about for better waves?

The Pocket Rocket is meant to ride bigger waves. Obviously it looks like a gun. But again, it doesn’t surf gunny. When I say gun, people think it doesn’t turn really well. It’s a gunny looking board but it surfs small. You can still surf it like it’s a shortboard. It’s meant for a good wave and an advanced surfer who’s surfing proper juicy waves – it could seriously be a go-to board to have in the quiver.

The Lopez line has such a nice aesthetic to it.

They’re beautiful. This Fusion Poly is just a regular hand-shaped surfboard – classic poly urethane foam and fiberglass construction. They have Gerry’s signature sharp rail. All the boards go really fast because they have that rail for speed. The Little Darlin has an edge around the whole board and the thing just accelerates. They’re really pretty and everything you’d expect from a Gerry Lopez surfboard: they look like you could hang them on a wall but they’re meant to surf.

Seems like you get to ride a ton of great shapes?

With Surftech, I get to ride everything they make across the board, from Sharp Eye to Channel Islands to Gerry Lopez to Donald Takayama, the top shapers. I’m riding every board the company makes, all the way back to one of my longest surfboard sponsors, Stewart. All across the spectrum. I’m talking just prone surfing before we get to foiling – every way to ride a wave on all surf craft they make I get to test. The  Surftech material is so cutting edge now, too. They are ahead of the times on trying new materials. I’m testing some crazy prototype carbon fiber, stringer-less boards that are so cool. The stuff they’re putting out is pretty awesome.