Danny Griffiths Wiped Out and Lost This Board in Tasmania in 2017; It Floated 2,700km to Queensland Without Any Dings 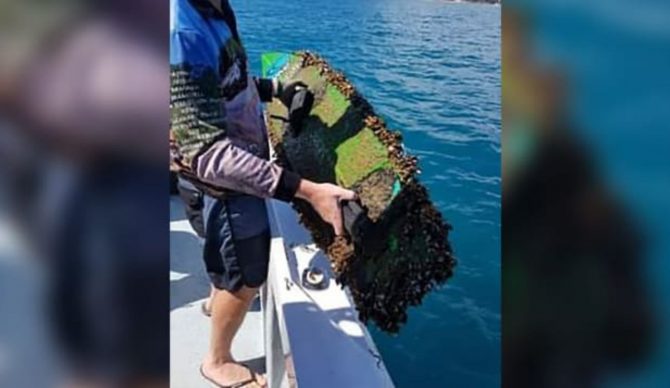 Apparently, it’s safer for boards to travel internationally by pushing them out to sea than to fly with American Airlines. Photo: Danny Griffiths

Like everything else in life, every surfboard will lose the fight with Father Time. Sometimes they get washed up on the rocks and beaten to a pulp while they’re still crisp and white, sacrificed long before their time. Sometimes we hold onto them way too long and they get brown and waterlogged because we’re too sentimental to trade the thing for a few feet of unused space in the garage. One version sees that board go out in a fit of glory. The other lets it die a slow, banana-bruised death.

In 2017 Danny Griffiths said goodbye to a favorite board when he wiped out surfing Pedra Branca, an island off of Tasmania.

“When I come up and was saved by the jetski, I couldn’t see it again,” Griffiths told The Guardian. “We lost it. We all talked about it, wondered where it is, wondered what could have happened.”

Assuming the thing was gone forever, he moved on with his life and says he hasn’t found a tow board that could compare since. And that’s where this very mundane tale becomes an intriguing story.

Sixteen months and almost 3,000 kilometers later, two Queensland brothers found the green board covered in barnacles while fishing. They took it home and hung it on their wall with no intentions of surfing it. The board apparently became an icebreaker over the years because while on a trip to Tasmania, their parents just so happened to tell a few locals about their sons’ discovery. Small world, right? Those locals quickly pieced together that the bright green board they were hearing about must’ve belonged to Griffiths.

“Even with the barnacles on it, I knew straight away,” he said. “All my big wave tow boards are straight fluoro green, and there are not that many big wave surfers around Australia. Everyone puts their straps on different. And the logo on it – they are a pretty small-known surfboard shaper here in Tasmania.”

So how’d the board make it from Tasmania to Queensland? It didn’t hop in a dingy then hitchhike up the East Coast of Australia. According to Edward Doddridge, an oceanographer from the Institute for Marine and Antarctic Studies, the board had to have floated around New Zealand.

“The big current that comes along the east Australian coast goes north to south, which means this board must have come some other way,” Dr. Doddridge said. “It can’t have gone up past Victoria and New South Wales.”

According to Doddridge, the board would have to move east from Tasmania then north up through the middle of the Pacific Ocean before making its way back toward Australia.

And this all happened without collecting any dings. Griffiths says the brothers are planning to send his board back and have told him it’s still “solid.” Apparently, it’s safer for boards to travel internationally by pushing them out to sea than to fly with American Airlines.

“Every board I’ve had built, to try and copy it, has never been the same and never worked the same,” he said. “If there’s no holes in it, hopefully, it’s still surfable.