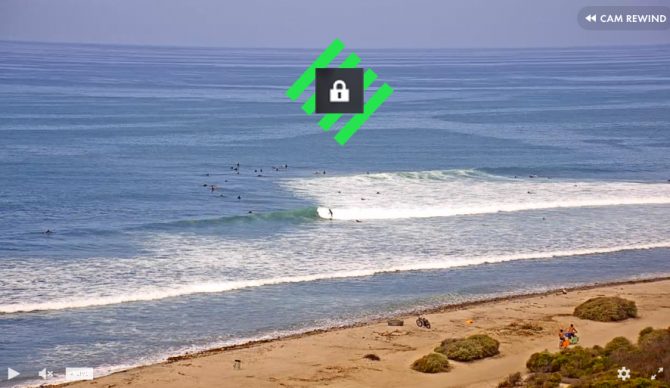 Why you gotta treat me so bad?

But it was worth it. Who wants to waste gas only to wind up NOT surfing because it’s crummy or, let’s be honest here, a little scarier than you’d prefer?

As the leader of my local surf posse for the past seventeen years, I’ve always been the scout – the guy who religiously analyzes those Surline cams and makes the final call, usually parlayed in short group texts.

Screw it – I’m sleeping in.

I even sent reports to my friend Jay…who lives two blocks from the beach!

All the while, I read your stories and looked at your ads. And how do you respond to my unfaltering loyalty?

You take away my 15-second peep show.

I know what you’ll say. You’ll say: “We have to be compensated for providing a valuable service.” Okay. Good for you. But let me ask you this: Do you pay for those news stories you read?

I didn’t think so. And that’s, like, First Amendment stuff.

Ain’t nothing about surf cams in the Constitution, mates. Look it up.

But, hey, I get it. People have to pay for things. You know, to live. It’s just that, you see, I live in California (as does a majority of your audience, I presume), and most Californians have a hard enough time grappling for housing, $3.80-a-gallon gas and weed, which we absolutely need because we’re stressed out about trying to make ends meet.

That’s right, Surfline. Unlimited MILFs! I can watch people doing the most inventive things with their bodies for nothing…and the views are never obscured by fog or seagulls.

But, hey – fine with me. I’ll just go back to checking the surf the old school way. So every morning, from here on out, I’m gonna wake up, get my coffee going and – call my buddy Jay.

Because it’s time he got off his lazy ass and gave me some reports.