Does Kelly Get Overscored? 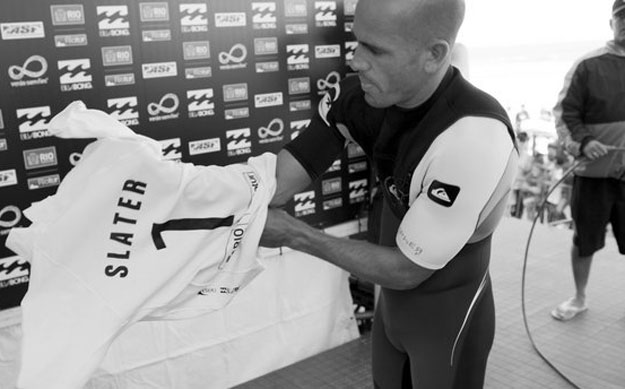 We’ve all seen it more times than we can count. Kelly Slater finds a wave in the dying seconds of a heat and gets a score that is just barely good enough snag the victory, leaving the crowd overwhelmingly pleased and his competitor fuming. In recent years, these last minute heroics have become the center of a controversy as some fans are beginning to express their discontent with the judges’ assessment of Kelly’s waves. Check the comments posted under the ‘Heats on Demand’ for any of Kelly Slater’s heats. What some are calling biased scoring appears to be leaving surf fans and critics alike asking several questions. Does Kelly get higher scores simply because he is the one and only Kelly Slater? Do his competitors have an automatic disadvantage when they surf against him? And how then can the ASP come to the defense of their supposedly experienced and impartial judges when so many people disagree with the scores they are giving?

To answer these questions we must first address the basic issue of subjectivity in the judging process. As is the case with any subjectively judged sports, such as figure skating, gymnastics or snowboarding, an athlete is given a score based on a standardized set of guidelines. The top score that the athlete can earn for each individual performance with no mistakes made is considered a ‘perfect score.’ Using the ambiguous concept of the ‘perfect score’ as a reference point, judges must compare the performance that they have just witnessed to their individual idea of what a ‘perfect score’ performance would resemble. Based upon that comparison they then have to rank the witnessed performance between zero (the minimum score for a performance) and a ‘perfect score.’ All of which must take place in a timely fashion with no concrete example of what a ‘perfect score’ performance actually is. With that in mind it can be assumed that a well experienced judge would be more likely to have consistency in his/her scoring due to to a more solidified set of standards to base scores on. There is no question that the judges at the top level of the ASP have a great deal of experience doing what they do so, again, why has their scoring been getting so much criticism lately?

Accessibility. Criticism of judges is certainly not new to the sport of surfing or any judged athletic event, however, the amount of information that can be accessed in an extremely short amount of time is rather unfamiliar to the sport. There are plenty of rumors about famous Occy/Curren heats and arguments over who beat who, but typically there is limited, if any, footage of the actual surfing from those heats. This leaves the critics of the judges making bold, unsubstantiated claims about what they have witnessed. With the age of information dawning and the ability to watch ‘Heats on Demand’ anyone with internet access has the ability to scrutinize the score given on any wave ridden throughout the entire contest. It is this type of accessibility that spotlights technical inconsistencies made in the judging process. What this type of accessibility fails to account for however is the human factor of judging.

Judges, at the end of the day, are simply people. Humans respond not only to a set of criteria they have established in their brains that is learned over time, but also to feelings, emotions and excitement. A true surfing heat takes place over a period of twenty to thirty minutes, and many times has several back and forth point exchanges. Sometimes these heats come down to the last few seconds and sometimes they occur in front of a crowd that heavily favors one surfer over another (i.e. any contest in Brazil when a Brazilian is surfing, or any heat with Kelly Slater in it). It is these factors that make surfing fun to watch. They encourage creativity and spontaneity. Can we or should we fault the judges for including their own personal judgments and reactions into their assessments of waves? If we were to hold the judges to a standard of objectivity, they would be stripped of their own personal connection to a ride, ergo contest surfing would become boring, stale, and quickly rejected by the masses. Feelings and emotions are an essential part of surfing and it is not only better to include them in the judging process, but necessary.

So for all you Kelly (sl)Haters out there, does Kelly get overscored? The out of context answer is probably. But does he also make the sport of surfing incredibly exciting, does he always pull off the unexpected and is he undeniably the best surfer that has ever and will ever grace the sport with his talent? The answer to that is yes.