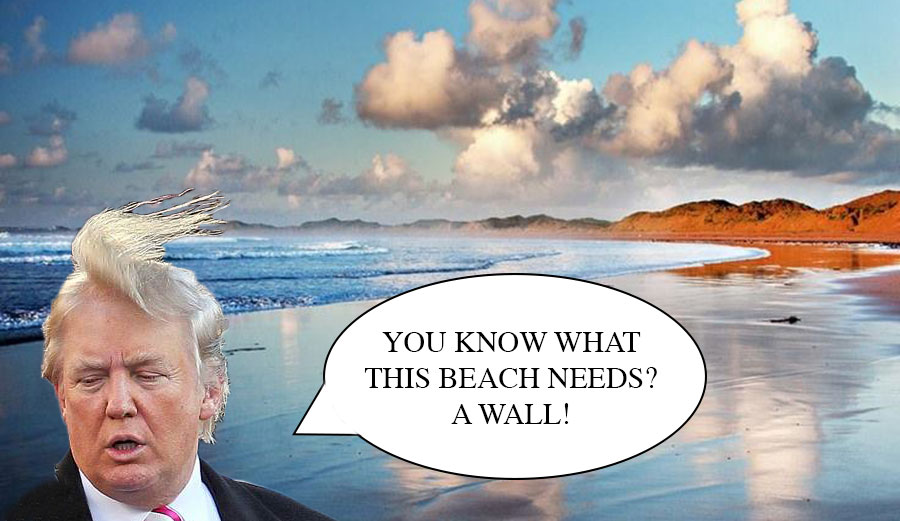 Last month, I wrote a piece about what might happen to surfers if Donald Trump is elected president. I got so much hate mail! If my email inbox could overflow, it would’ve. “You’re a communist!” people yelled from their keyboards. “If you like some parts of socialism and dislike some parts of capitalism, you must be a full-blown communist!” Reading hate mail is a nice way to start the day. Anyway, one of the points I made was that you can say goodbye to a lot of coastline in California. Because I’m too lazy to rewrite what I wrote, here’s a bit of it so you get the gist:

“Donald Trump is a developer. He builds things on land. He makes hotels and condos and anything else he can build, anywhere he can build it. Right now in California, the California Coastal Commission is in charge of making sure one of the most beautiful stretches of coast in the world isn’t destroyed by mini-malls and condominiums. Although the recent firing of Director Charles Lester (under very suspect circumstances) might mean a disastrous future for anyone that prefers nature over towering blocks of cement and vast parking lots, they still have a hand in keeping the sanctity sacred, as it were.

If one needs an example that Trump cares more for money than anything else (one shouldn’t need an example), take certain a golf course he built. Back in 2012, Trump built Trump International Golf Links course in Scotland, despite the fact that it completely ruined incredibly rare dune wetland habitats. The course was built on 4000-year-old coastal sand dunes in Aberdeenshire–which, interestingly enough, were protected but the Foveran Linkes Site of Special Scientific Interest. Not only did the Scottish Natural Heritage body protest the construction, but Trump’s own ecologists deemed it to be unnecessarily destructive, according to Time Magazine. But now, a few years later, the golf course is there and the ancient dunes are not.”

So, despite the fact that everyone, including his own ecologists, told him he was destroying incredibly rare dune wetland habitats, and that the course was “unnecessarily destructive”, he went ahead and did it anyway. And holy shit! He wants to destroy more beach for a golf course, only this time in Ireland!

See, Trump built another golf course called Doonberg Golf Resort in County Clare, an area of Ireland that’s incredibly beautiful and also happens to have a handful of really good waves.  Because Trump decided to build a golf course basically on the sand, which seems like a bad idea (“…a foolish man who built his house on sand” said the Bible), and shows staggeringly terrible foresight for a man in construction, natural erosion is kind of messing it up. So of course, he wants to fix the problem by–you guessed it–building a wall. A very big one. Made from 200,000 tons of boulders, the wall would stretch nearly 2 miles along Doughmore’s sand beach. At almost 20 feet high and 100 feet wide, it will destroy a vast portion of beach and a few of those really good waves.

So far, it’s still in the planning stages. Permission for the massive rock wall hasn’t actually come through yet. According to Magic Seaweed, Trump’s Irish business isn’t exactly open to other suggestions, either. If it doesn’t get its way, the golf course will simply shut its doors and lay off everyone that works there. “Trump is threatening to close the facility and lay off people, if he doesn’t get his way,” Wayne, an admin from the Save Doughmore Facebook page, told MSW. “These are scary threats, there’s no question of that. The fear of our friends and neighbors losing work is very scary, and let me reiterate we are in no way trying to close the hotel and golf course, we are just asking for some ethical business practices and some sound environment practices.”The permanent destruction of a beach can never be the correct, moral and sane choice.”