Eddie Would Go: A Surf Trip in Ghana 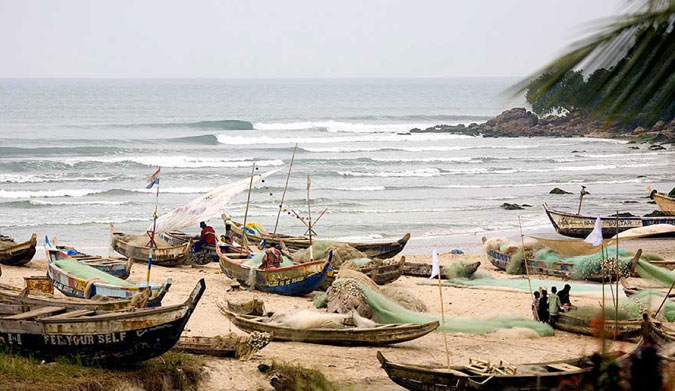 My friend Kev quit cocaine, the film industry, and women of loose morals. He now works in Johannesburg for our other friend, Los the Boss, managing construction of fast food chicken restaurants, electronic stores in shopping malls, and mobile phone consortiums. I, too, work for Los the Boss now, but that’s a different story.

There is absolutely no surf in Johannesburg, but Kev frequently has to trek into other African countries where the aforementioned companies are making more money because South Africa is going down the toilet. Recently, Kev went to Ghana where there is surf. When he came back, I was there to meet him at the airport to catch up. “So, I’ve got a story for you,” Kev says to me. He explained that he landed a free weekend while in Ghana, so he took my advice and went surfing. Kev met a guy who knew a guy who said he might know another guy who could get a board for him to rent. The guy’s name was Eddie – and although most people don’t speak English in Ghana – this is how their conversation went down.

“Do you need the thing that goes on top?” asked Eddie. Kev didn’t know what he was talking about. He thought that Eddie was referring to a beach umbrella, so he said, “no, just the board.” Kev arranged to meet him at seven the next morning outside the hotel with the board. He told Eddie not to be late because that’s not how surfers roll. Kev didn’t actually expect him to rock up, but sure as shit, there he was at seven sharp the next morning. He arrived with a windsurfing board on the roof of his car – foot straps and everything. “I need a surfboard,” Kev chuckled. He tried explaining the difference as best he could, but, like I said, the language barrier is a bit of a problem over there. It was in that moment that Kev figured out the thing on top Eddie was referring to was the sail. “No problem,” Eddie said as he hurried off. As promising as Eddie sounded, Kev didn’t expect to see him again.

However, about an hour later, Eddie came back with a proper surfboard. It was a six-foot-something fish and in decent shape, too. Kev took one look at it and knew he’d never be able to paddle the thing. Let’s just say that with the lack of surf in Johannesburg, the beer and pizza, and the simple fact that there’s nothing else to do in Johannesburg (other than getting rich, swearing at other people in traffic, and culpable homicides all of which are very popular pursuits), Kev gained a few pounds.  “Ok,” Kev uttered to Eddie. “Let’s give this thing a go.” “$150 USD,” requested Eddie. Kev thought he could bargain, but he knew Eddie was not the kind of guy you want to fuck with in Ghana. So Kev agreed to $150 USD and Eddie threw in six of his own paintings – a few of which were given to me as housewarming presents. They’re actually not bad.

“No idea,” replied Kev. “I couldn’t work it out, but all I know is that was the most expensive surf I’ve ever had.”
Kev took the fish and went down to the nearest beach break where there were one to two footers barely slobbering in. The water was as warm as blood and littered with things that spewed from fast food chicken restaurants. Kev said that he tried not to look too hard at whatever it was that shared the line up with. He was right about the board; he only caught one or two waves because it was just too short and not buoyant enough.

He rode prone to the shore where he noticed an excited group of boys watching him “surf.” Following the lackluster surf session, Kev decided to push the group of boys into a few waves. He noticed one boy in particular was keener and more determined than the rest. Somehow, through the language barrier, he told Kev that his father was a surfer and their home was a short distance down the beach.

Kev asked the kid if his dad had a bigger board than the one he was riding. “Sure!” replied the child. “Follow me, I’ll show you.” Kev and the boy exited the water and headed down his house. The boy’s old man can’t speak any English, but he works out was said and agrees to show Kev the board. The boy’s father took Kev into a back room where the board was stored. To Kev’s surprise, it was the sailboard Eddie first brought to him.

Kev had his paintings from Eddie for me framed in a triptych. One is of a woman threshing wheat or corn, or whatever it is they eat in Ghana. The other painting is of a fisherman beating a drum. In the middle is one of a hut. Eddie the champion artist of the world’s elaborate signature adorns the bottom right of each. I’m proud to have them hanging in my living room. I don’t know if they are very good paintings, but if I ever get sent to Ghana for a chicken restaurant, I know who I’ll ask for when I want to go for a surf.