Entrepreneurship and Barrels Make a Fine Pair at the Surf Ranch 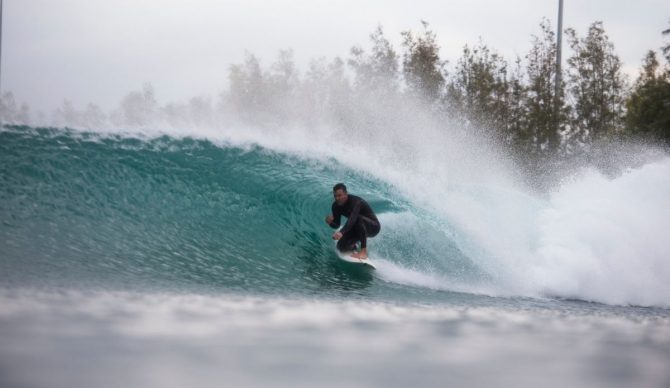 This is not what a typical tech conference looks like. That was exactly Crosscut co-founder Brian Garrett’s intention. Photo: Pat Stacy

He disappeared behind a curtain of water for several Mississippis. It was twelve seconds total. The wave, which broke so evenly it seemed stationary, appeared completely empty. Riderless. That’s when Alex Wheeler reappeared. He catapulted straight out of a barrel so deep, he exited in disbelief. He stretched his arms to the sky and let out a hoot of raw joy after slingshotting to the shoulder.

A Laguna Beach native and proficient coder, Wheeler is the co-founder and CEO of Care Connections, a medical technology company that remotely monitors patients’ health, most frequently in the context of diabetes, heart disease, and hypertension. His company gained substantial traction as the need for telemedicine expanded over the last year and a half. He has long blond hair. As the archetype goes, he looks (and talks) like a surfer. Pointedly, he also surfs (very well). Physicality aside, the surfer stereotype stops there.

He, along with a diverse crew of Los Angeles entrepreneurs in e-sports, fintech, e-commerce, digital health, hospitality, streetwear, and media trekked to Kelly Slater’s Surf Ranch in Lemoore, California on a crisp late-fall day for an event called Making Waves. The gathering, spearheaded by an assortment of organizations powering the Los Angeles tech ecosystem, including Crosscut, Hunt Club, Fenwick, PacWest Bank, Artium, The Hundreds, and Boxxie,  had two objectives: Exchange ideas. And surf. The latter was just as important as the former.

I managed to sneak into this assembly of entrepreneurs at surfing’s most prized rural destination as a peripheral member of the Los Angeles entrepreneurial community. I was able to visit a couple of years prior on a surf media press day, and I vowed if I ever had a chance to return, I’d be there in a heartbeat. The experience of accessing perfect barrels on tap was borderline euphoric. I had two objectives, too: improve on my initial performance and observe how this community of surfy entrepreneurs gelled.

Bobby Kim (aka Bobby Hundreds, founder of the clothing brand, The Hundreds) had just flown in from an NFT (Non-Fungible Token) event called #NFTNYC the night prior in New York. By midday, he’d exited a handful of square-shaped barrels and debated the future, opportunities, and challenges of NFTs. 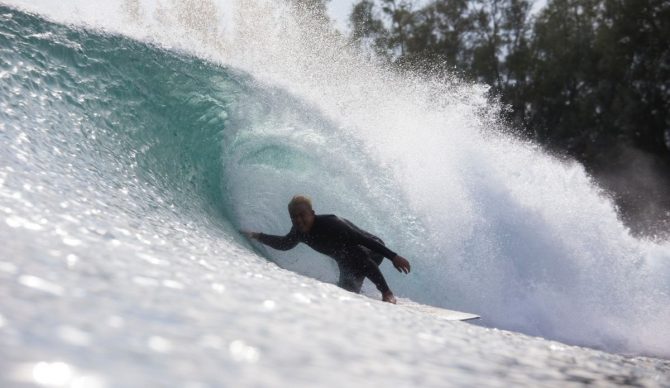 Between heats, Amir Hemmat, founder of Welcome Technologies shared insights from his journey building a company that provides financial resources for immigrant communities transitioning to life in the United States. Born into a first-generation immigrant family, he recognized how poorly served this population has been and aimed to solve it. While he was new to surfing, he embraced the challenge to learn something new.

“There are so many people and so many different ideas,” said David Langan, co-founder of Umbra, a company that builds satellites that take images 320 miles above the earth and makes those images more accessible in price and function to the private sector. Langan grew up surfing in Santa Barbara. “I built systems for national security customers. I know one thing. Aerospace. It’s all I’ve been doing since I got out of school. Before I had a more traditional approach to aerospace, and the way we’re coming at it is so different from how you’d come at it as a government contractor.”

Kurt Daradics, GM of Hunt Club, a tech firm focused on helping high-potential companies staff and scale, was noodling on a Taylor guitar while another heat of entrepreneurs navigated the end section of the perfect barrel out front. Kurt and I carpooled to the Surf Ranch, and had an interesting conversation around the process of converting an idea into a tangible thing. It’s a delicate art that requires vision, communication, and a disciplined commitment to executing the tangible steps necessary to bring that idea to life. I could relate, and I recognized that instinct in the unlikely group of surfers in the lagoon. 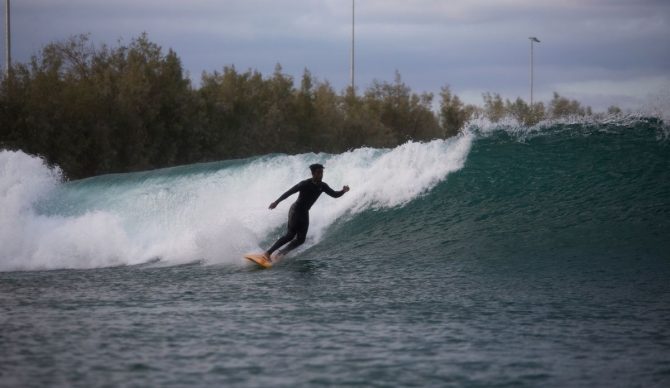 “I feel like I finally found my people,” said Ross Hale, CEO of Artium, a company that helps firms build software teams. “Tech people who surf.”

The scene offered a unique alchemy of ambitious individuals buoyed by a rush of endorphins from flawless, manmade waves. As soon as the entrepreneurs exited the water, most of them beelined to an area to review surf footage and make small improvements before their next heat. The crew of tech junkies really just wanted to master Kelly’s pool. If even for just twelve seconds. That made sense.

It was exactly what Brian Garrett, co-founder and Managing Director of Crosscut, an early-stage venture capital firm based in Santa Monica that has made investments in many of the companies represented, envisioned for the Los Angeles tech community – especially for those with a penchant for riding waves: the anti-tech conference.

“I want to gather people in an environment that’s conducive to actual, meaningful connection,” said Garrett, who grew up surfing and playing volleyball in Los Angeles. “Ideally, that’s in a place like the ocean or outdoors. Not in sterile conference hallways.”

Another perfect wave peeled across the lagoon in the middle of the cow pasture in rural California. The audacity of the surroundings was not lost on this group.

Big ideas turned into reality. The setting couldn’t have been more appropriate.