Examining the History of Composite Surfboards and the ‘Popout’ vs. Hand Shape Debate 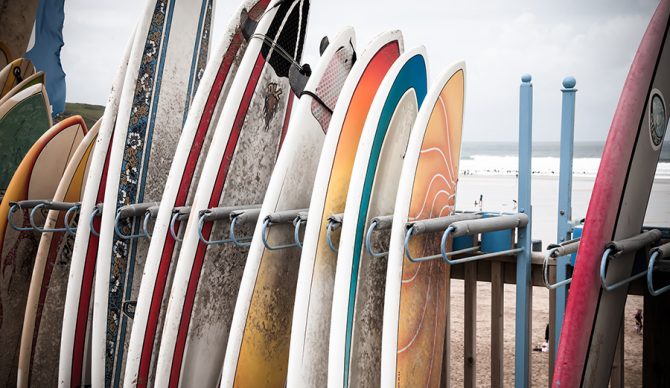 Rental racks around the world are often look like this. Photo: Leif Christoph Gottwald//Unsplash

Since days in millennia past, when surf craft were hewn from wood with a stone ax, smoothed with a stone or pumice and then polished with palm or kukui nut oil, surfers have taken inordinate pride in their “hand-made” equipment. To the point where today a considerable number of surfers actively eschew innovation, clinging tenaciously to the idea that any manufacturing technique that veers away from those employed in 1960 somehow compromises the “soul” of their surfboard. They designate any board not shaped with a wood-working planer and hand-laminated with post-WWII resins using wallpaper squeegees then sanded and polished with archaic power tools, as a “popout.” Accent on the derogative. Which makes understanding the difference between a true “popout” and today’s modern composite material surfboards that much more crucial for any surfer daring to step forward into surfing’s future, while still retaining their “soul.”

With the advent of mass-produced surfboards and subsequent surfing boom in the early 1960s, it was only natural that other interests would figure out a way to jump on the bandwagon and make a few bucks. In this case, “other interests” meant non-surfers at plastic manufacturing companies like Titan and Ventura International, who quickly devised a cheaper and less artisanal manner with which to pop out surfboards costing considerably less than those of established labels like Hobie, Weber, Jacobs, and Bing. A closer look revealed why. Unlike surfboards hand shaped from closed-cell polyurethane foam blanks and hand-laminated with fiberglass cloth and polyester resin, these boards were constructed by pouring all the necessary ingredients — expanding foam and chopped “matte” fiberglass — into a pressurized mold and simply “popping out” a finished product. Marketed under a variety of names like Diwain, Dextra, Cutlass, Tiki, Ten Toes, and Duke Kahanamoku, these boards were readily identified not only by their external molding seam, but by their use of inlaid, veneer stringers which, while they approximated the look of those on a hand-built board, served only as decoration.

Right off the bat, these faux boards were deemed for kooks only, and although due to their price tag, availability in sporting good stores and wide use in various rental fleets, many a surfer who started in the 1960s rode their first waves on a Dextra or a Tiki. By the late 1960s the popout had been properly shunned from virtually all lineups other than Canoes in Waikiki.

Fast-forward to the mid-1990s. Randy French, a top Santa Cruz shaper, Sewer Peak kingpin, and hot sailboarder, started looking at his sailboards and thinking, “Hmmm.” Following a period in the early 1980s when custom sailboards were still being built in surfboard factories, the sport’s top labels realized that the extreme stresses put on wave-sailing boards required a much more sophisticated, more durable manufacturing technique. The answer lay across the Pacific, where in Thailand, for example, factories could be set up to use more modern materials and techniques in the construction process and, due to inexpensive labor and rent, still not have to triple the cost of a board. French’s light bulb moment came easy: why not repurpose one of those sailboard factories (the sailboarding boom having since gone bust) to build surfboards?

In 1997 French did just that, naming his new company Surftech and commencing to produce “composite material” surfboards. Composite defined as, “Two or more constituent materials, these materials having notable dissimilar physical properties and are merged to create a material unlike those individual elements.”

He was not the first. In the early 1970s a trio of surfboard companies rolled the dice with new, “space age” manufacturing techniques. AquaJet, Hansen and W.A.V.E simultaneously began building molded boards, their hollow cores wrapped in a super-durable epoxy resin/honeycomb skin. A commendable effort, with Hansen even offering a “Jerry Lopez” [sic] model, and Morey-Pope’s W.A.V.E. brand assembling a veritable who’s who of designers, (including Dick Brewer, Renny Yater and Ben Aipa). But hitting the market right in the thick of the 1970s “soul surfing” era, none of these coreless [read: soulless] boards had a chance. Oh, and most of them leaked.

The mood was different in 1997, and so were French’s manufacturing innovations. Surftech boards began life as lightweight, extruded polystyrene (Styrofoam) blanks, computer-shaped to the exact specifications of a master shape, reduced ever so slightly to accommodate multiple layers of epoxy/fiberglass and sturdy, high-density PVC foam. This combo was then pressure molded around the blank with a game-changing, proprietary method that eliminated the seam. The super light, super strong shape then got a second epoxy/fiberglass layer, laminated with state-of-the-art vacuum-bag technology, and then was finished with a polyurethane topcoat. The end result was a light, extremely durable surfboard, replicating the exact dimensions of the original design. 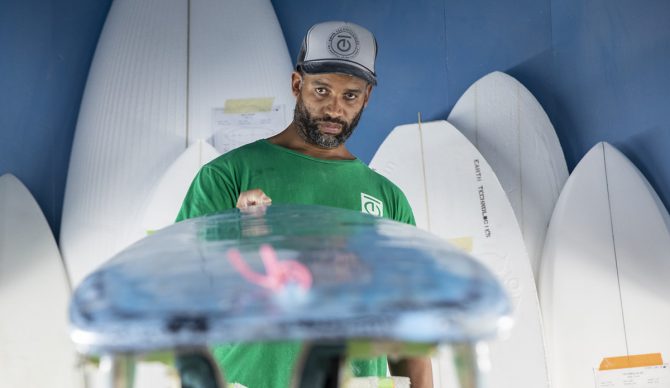 Traditional shaping is still as relevant in the surfing world as ever. Ryan Harris, checking his work. Photo: Jeremie Brilliant

This time around, a significant number of surfers bit, especially those making up the burgeoning longboard market (it helped that Surftech offered models from virtually every legendary shaper in the business, paying them substantial royalties) and soon French’s brainchild was one of the fastest-growing surfboard companies in the business. Nevertheless, in the ensuing years composite material boards still met with resistance from many surfers who, primarily because of the term “molded” and the fact that the PVC foam core, which only came in one color (root-beer brown), required an opaque topcoat, derisively referred to them as “popouts.” There was also the prickly issue of “offshore manufacturing,” which seemed to be criticized most sternly on ethical rather than economic grounds, the idea of “non surfers” building surfboards again being deemed unacceptable by a considerable percentage of the suitably devoted.

In recent days, however, surfboard companies like Firewire and Global Surf Industries have met with great success, both in refining the composite material production process and allaying many of the residual misconceptions and superstitions surrounding “non-traditional” board building — especially the “my surfboard has soul” issue. This continuing mindset is especially ironic, considering that with its elaborate construction sequence, more human hands actually touch a composite material board than in the making of its traditionally built counterparts. Which, for some reason, are never referred to as popouts, despite the molded foam blanks and close-tolerance computer shapes currently in use by almost all major manufacturers.

Then again, whether hewn from a koa tree or from a varial foam blank, shaped by SKIL planer or CNC computer program, glassed with a rubber squeegee or in a polyurethane vacuum bag, emerging from a high-tech factory in Thailand or a funky backstreet in San Clemente, surfboards have never really been considered in anything other than emotional terms —innovation be damned. And that’s probably what still makes getting a new board, regardless of how it’s made, so good for the soul.