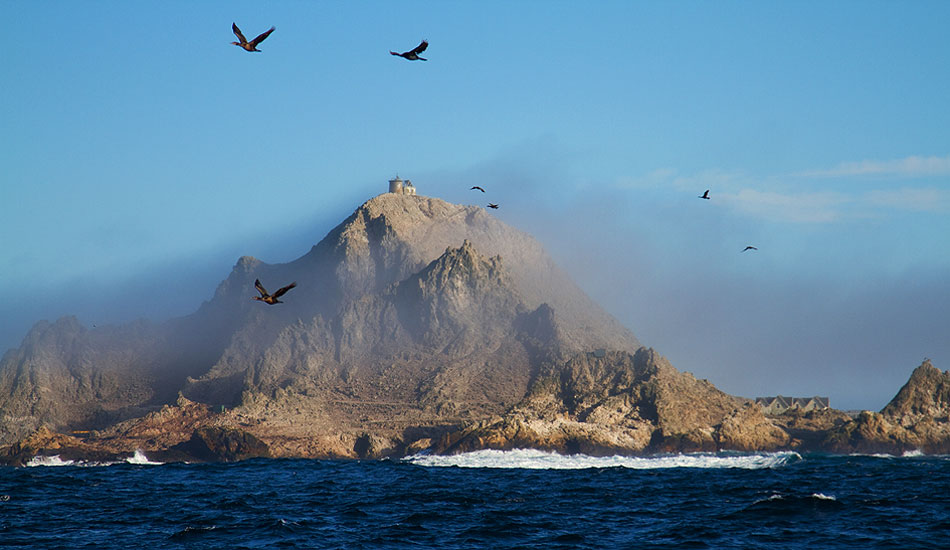 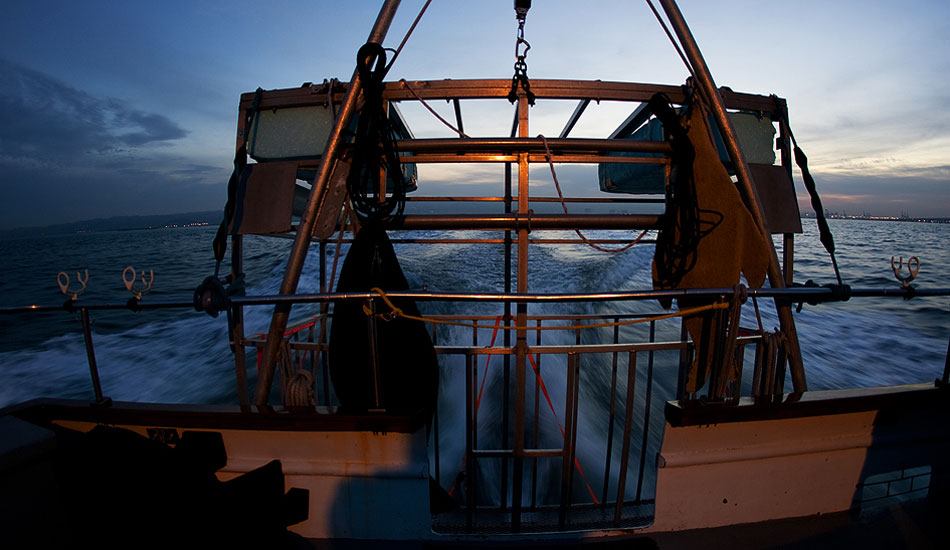 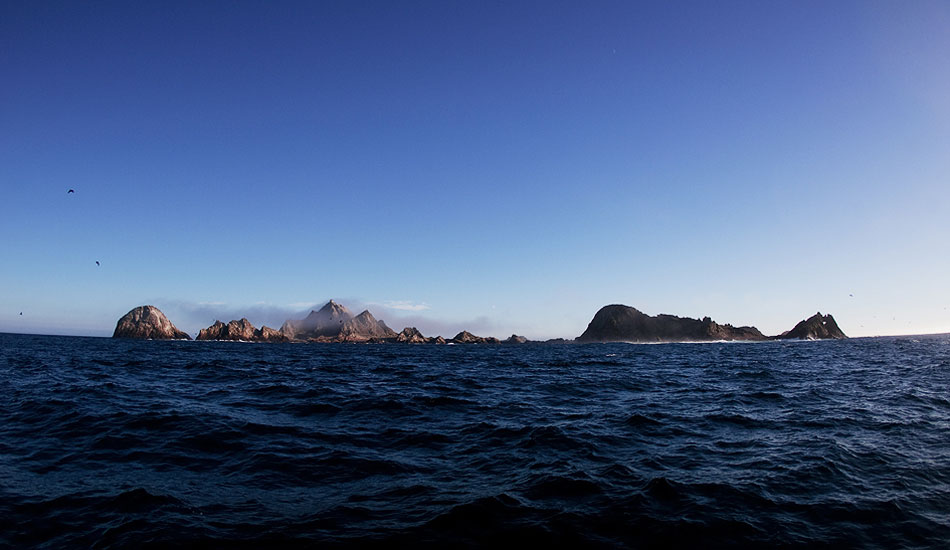 Thirty miles off the hustle and bustle of San Francisco. Photo: Seth Migdail 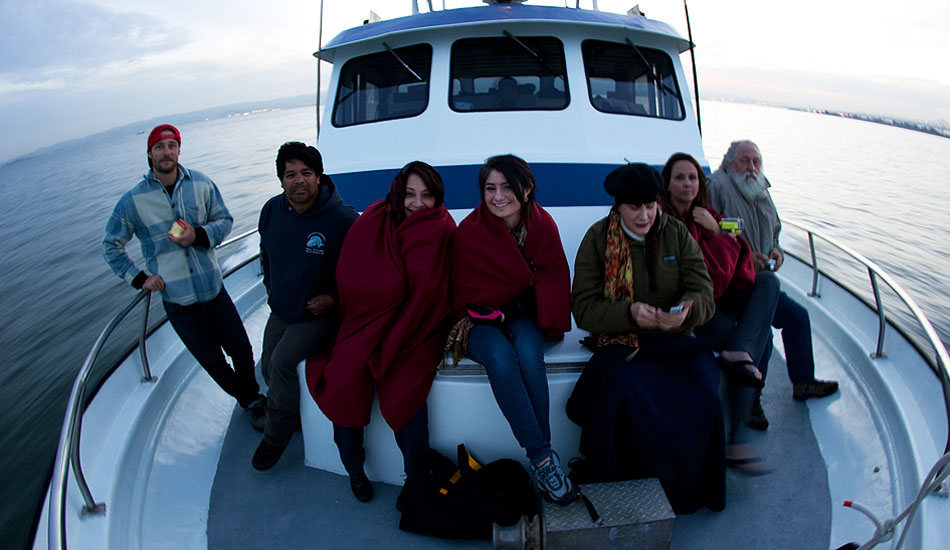 Just a few of the group, slipping past Alcatraz. Photo: Seth Migdail 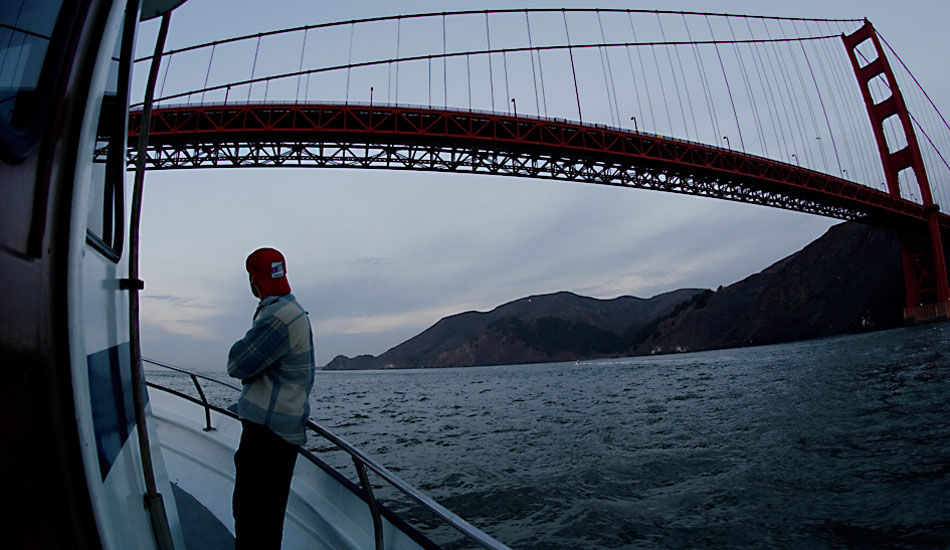 We create beauty, but it pales in comparison to the beauty of what we destroy. Photo: Seth Migdail 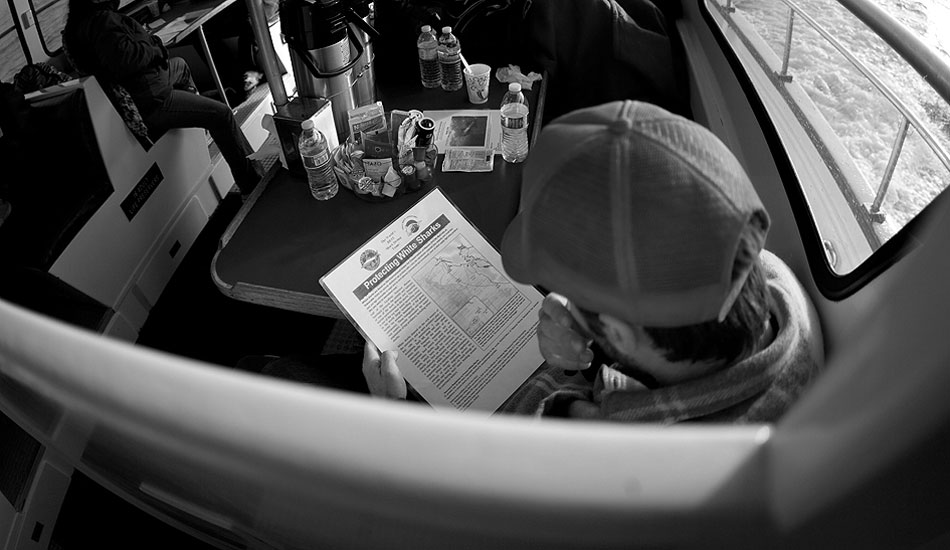 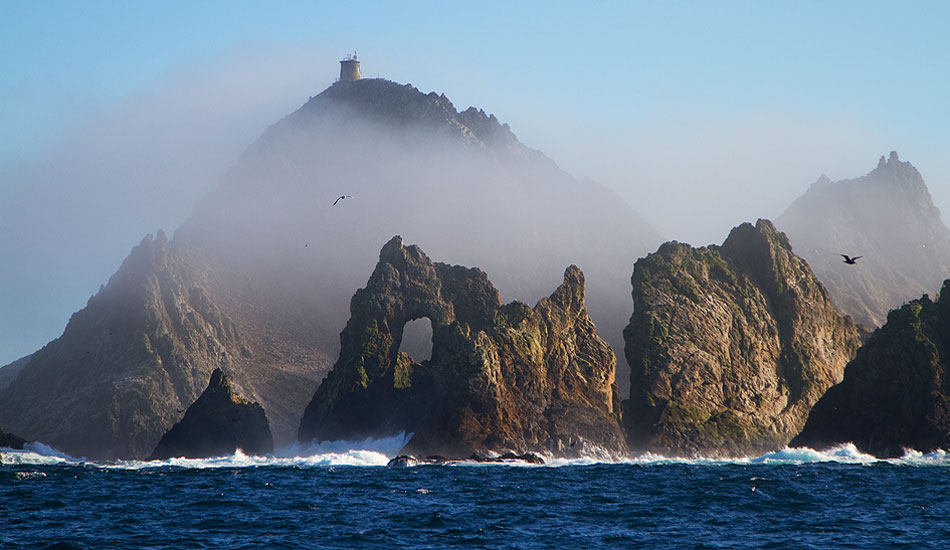 Elephant seals and more species of bird than you can count inhabit the Farallons. Photo: Seth Migdail 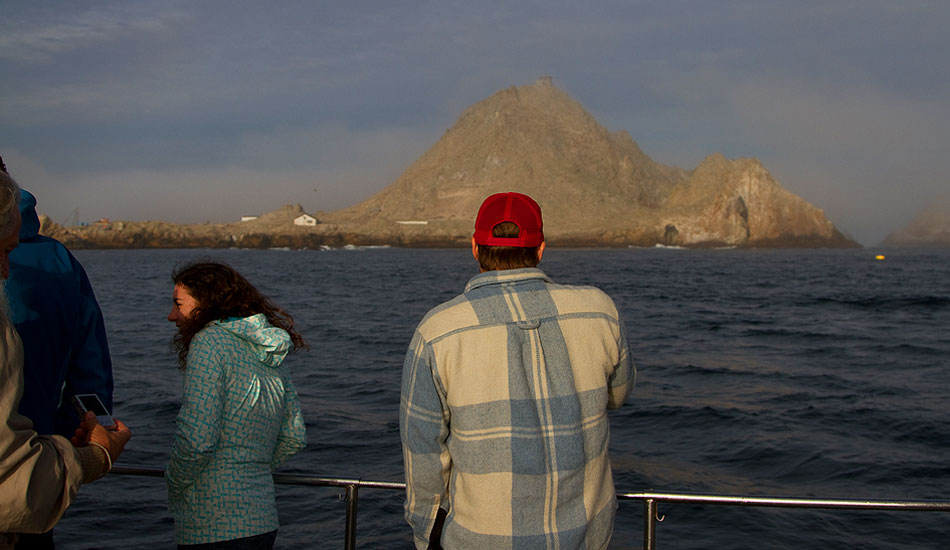 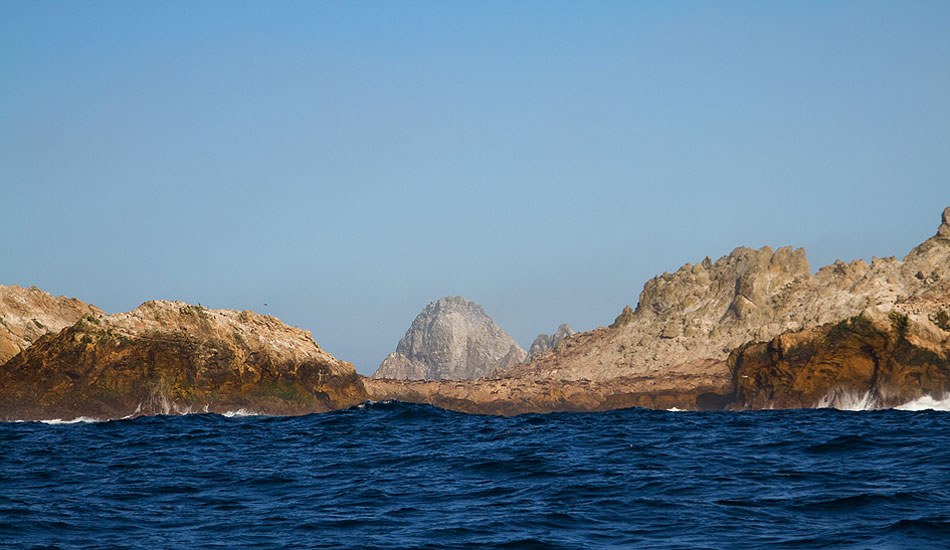 Parts of the island are called "The Devil's Teeth" because of the threat they posed to sailors. Photo: Seth Migdail 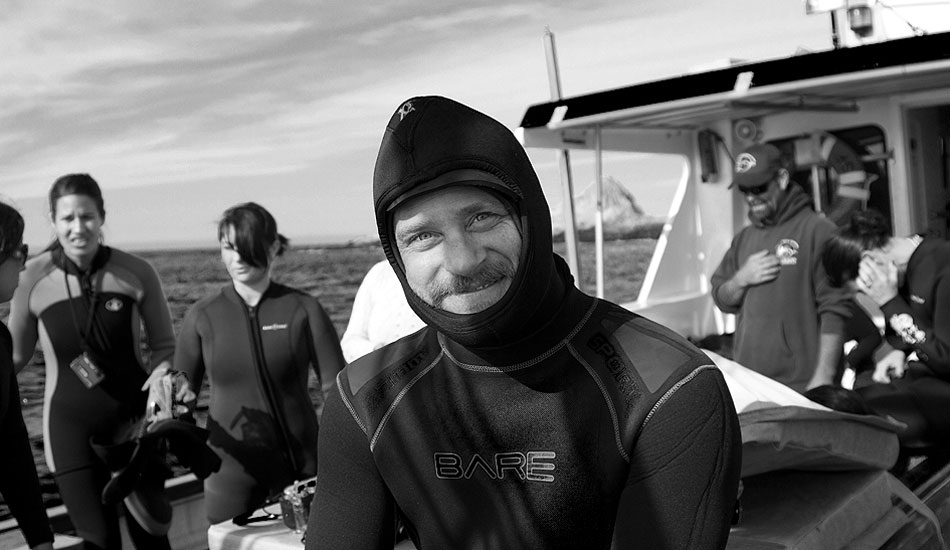 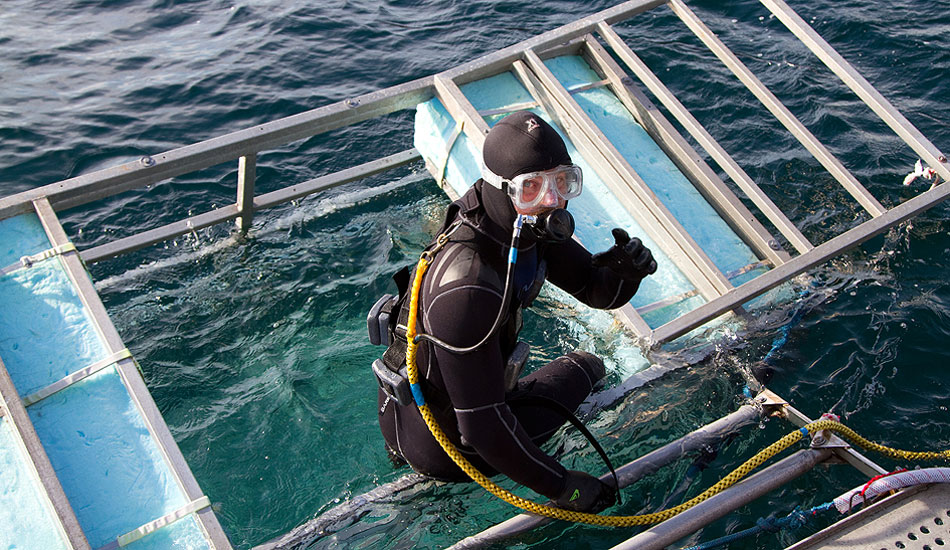 Being in the ocean in a cage makes you feel like an intruder–or a prisoner. Photo: Seth Migdail 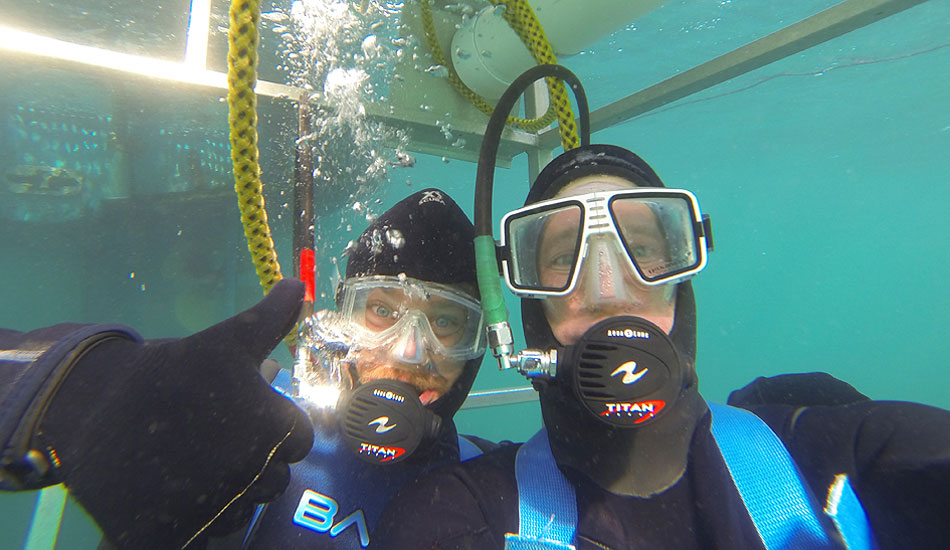 Seth and I, playing the waiting game. Photo: Seth Migdail 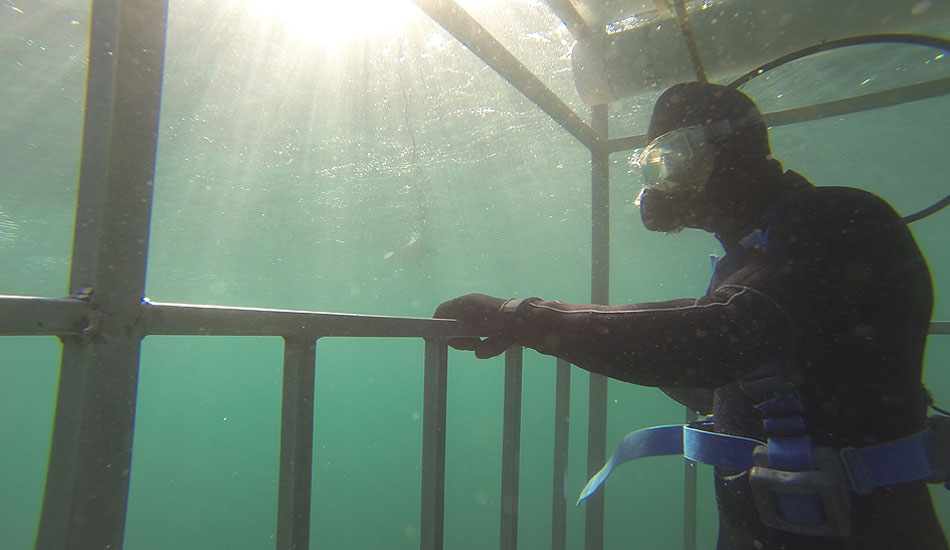 Insert shark here, and you have a successful trip. Photo: Seth Migdail 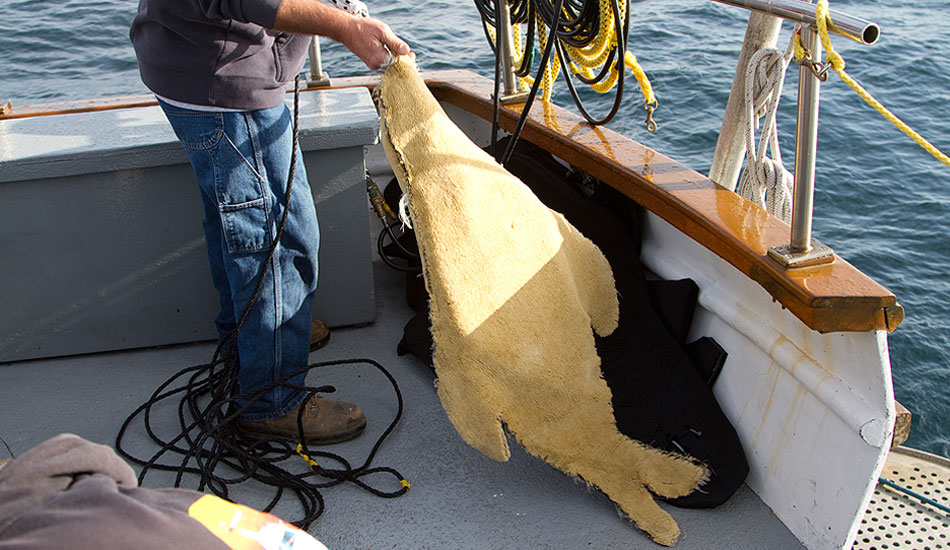 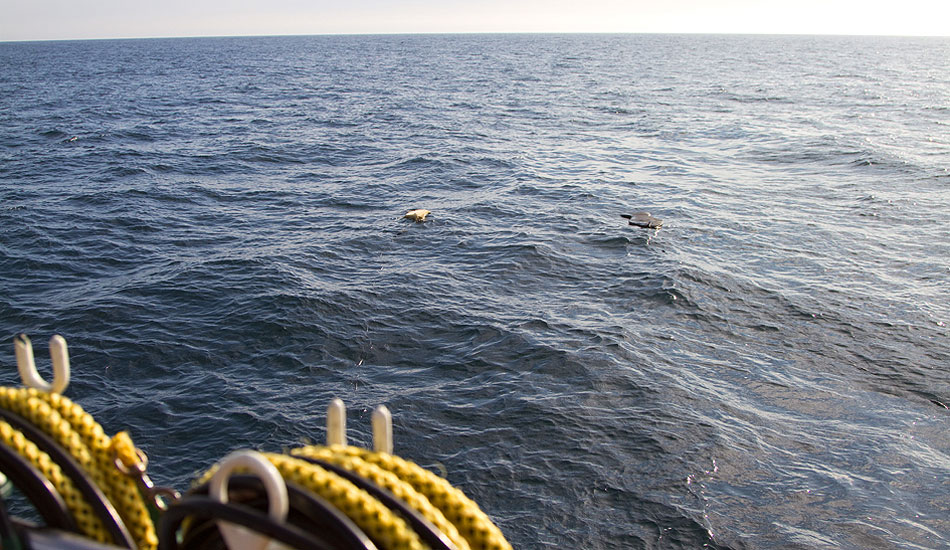 Set the decoys and wait. And wait... and wait. Photo: Seth Migdail 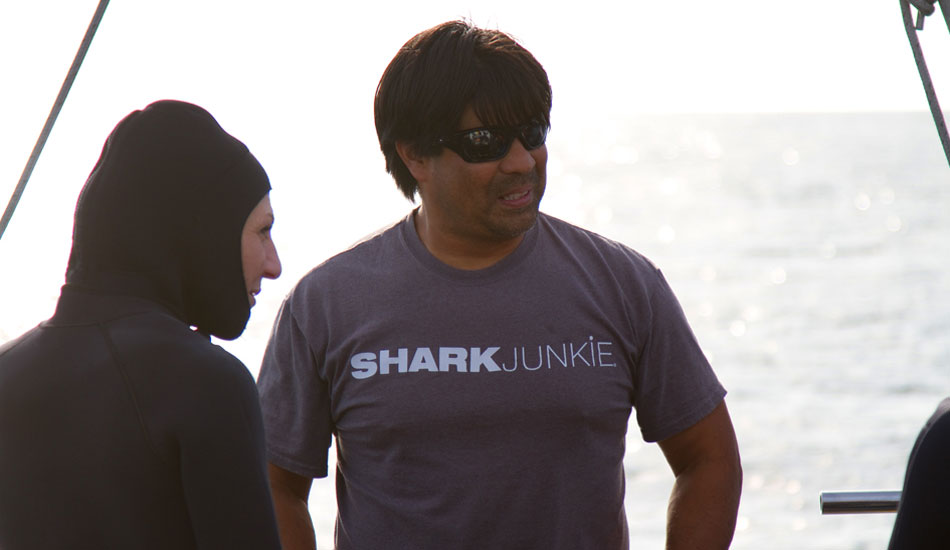 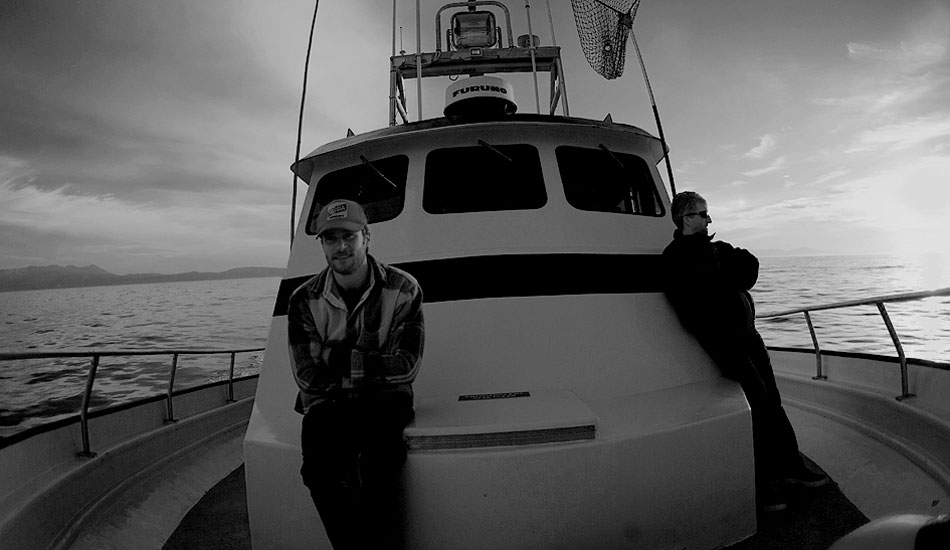 The forward deck of the Superfish. Photo: Seth Migdail 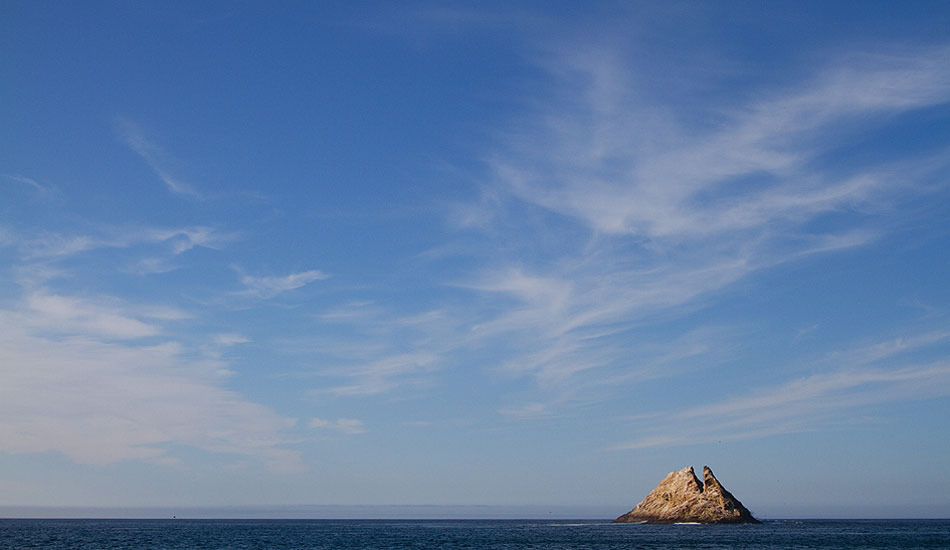 Saddle Rock, home to a great right-hander and a lot of sharks. Photo: Seth Migdail 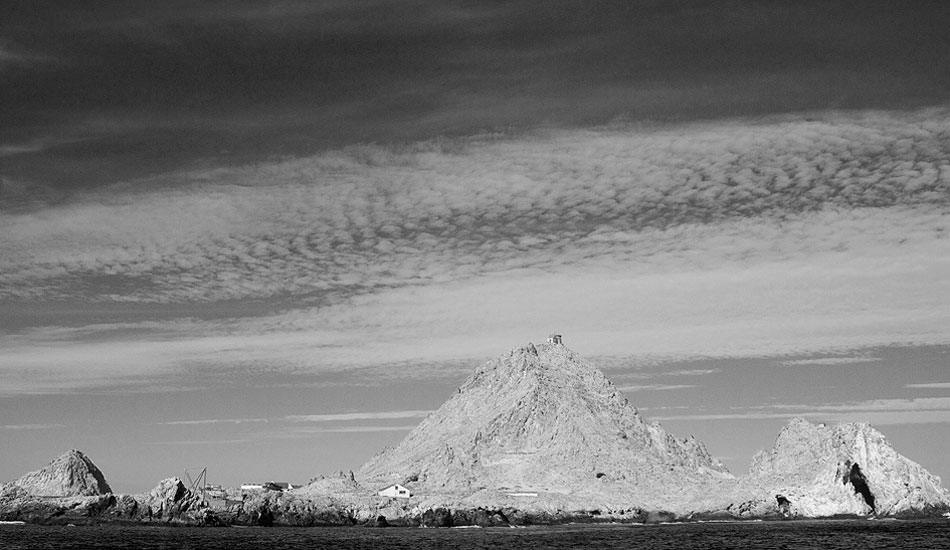 The highest point on Southeast Farallon, and home to one of six people that stay on the island. Photo: Seth Migdail 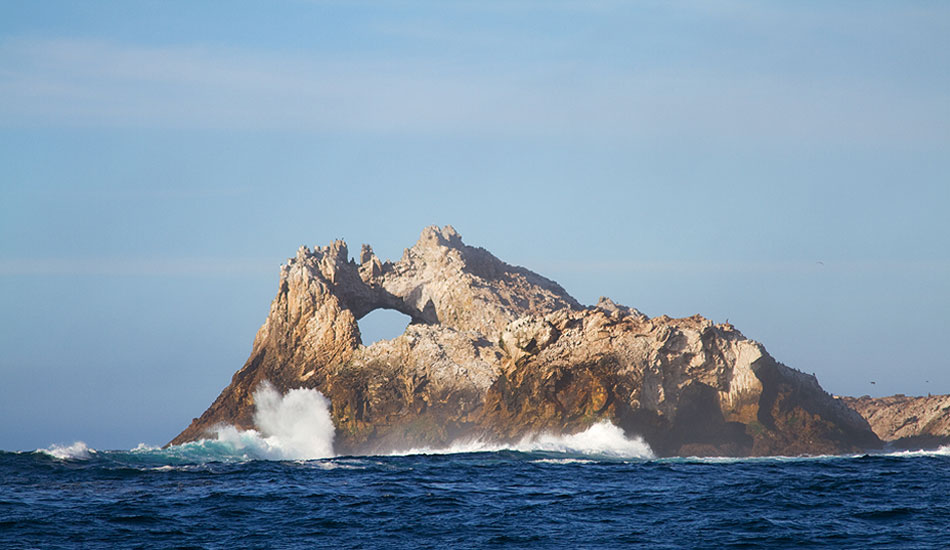 Just a small window in a larger piece of something amazing. Photo: Seth Migdail 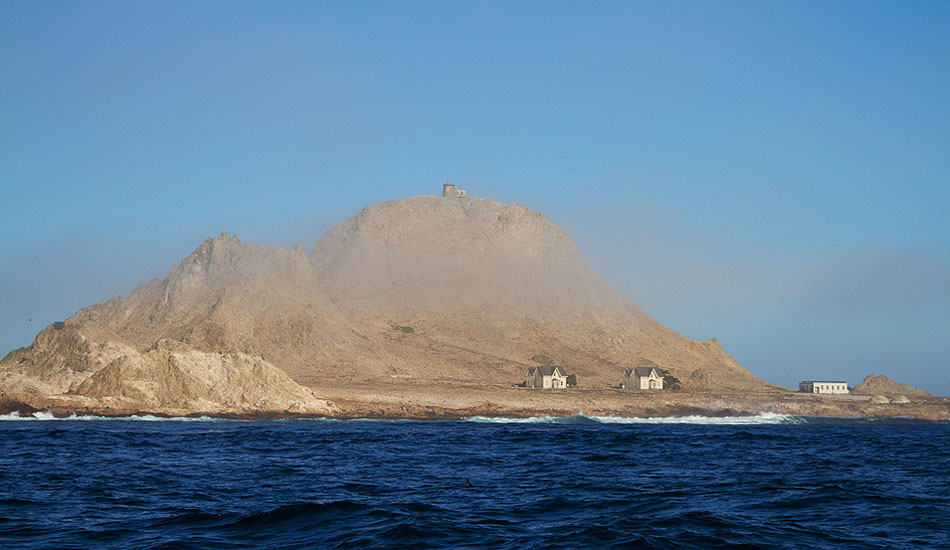 Twin Victorian-style houses sit at the base, serving as homes for the island dwellers. Photo: Seth Migdail 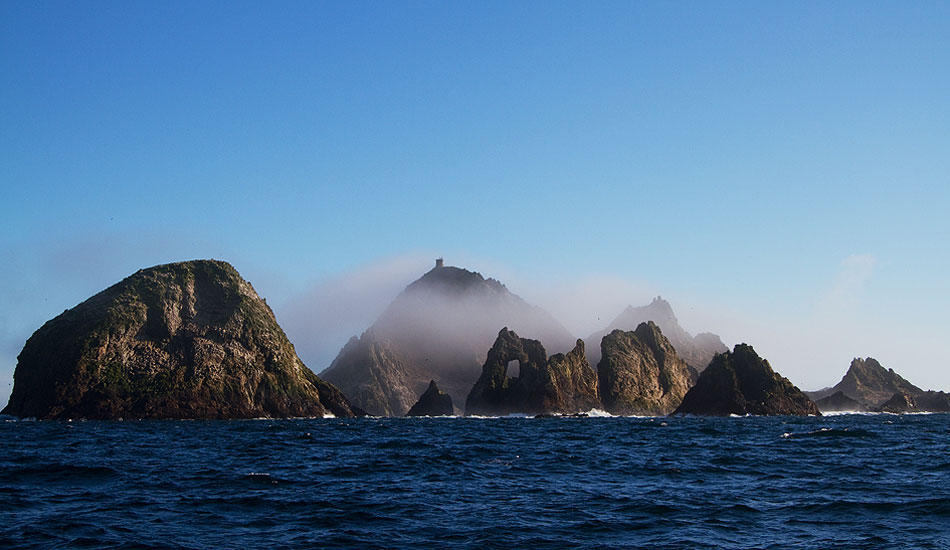 Mist clings to the top of SE Farallon, trying to hide the structure.Photo: Seth Migdail 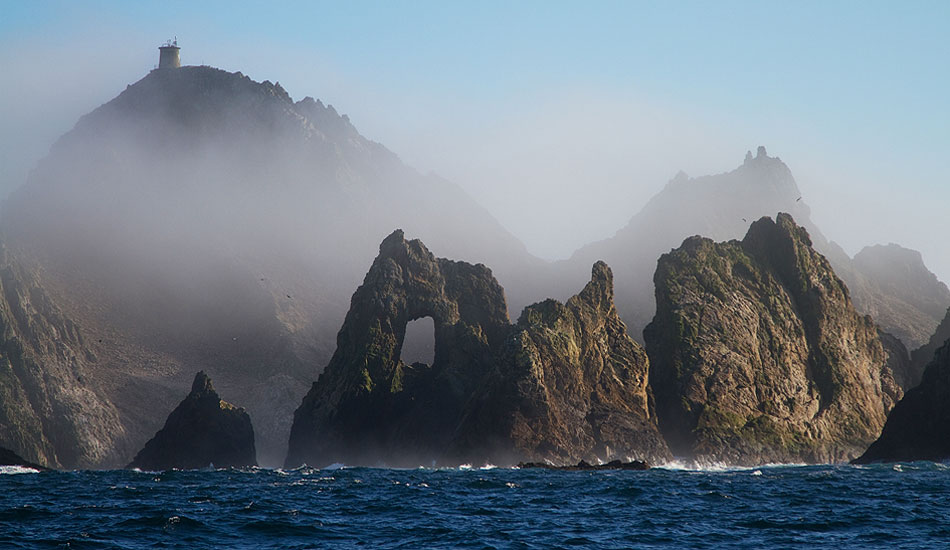 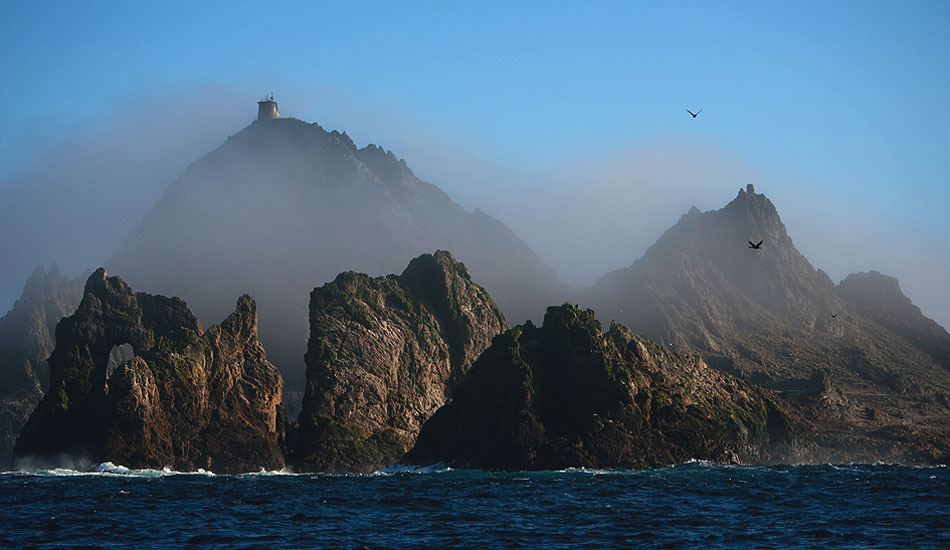 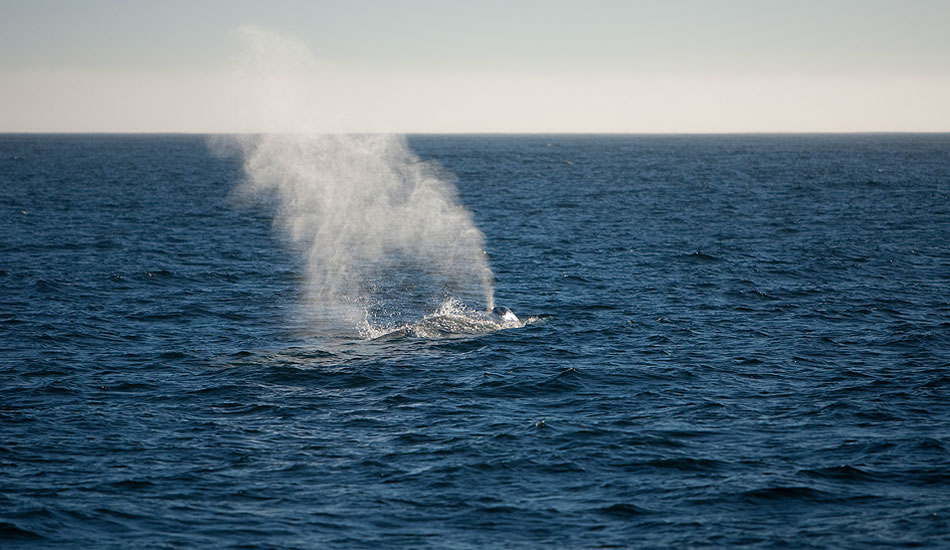 On our way home, a whale surfaced, leaving its footprint behind when it disappeared. Photo: Seth Migdail 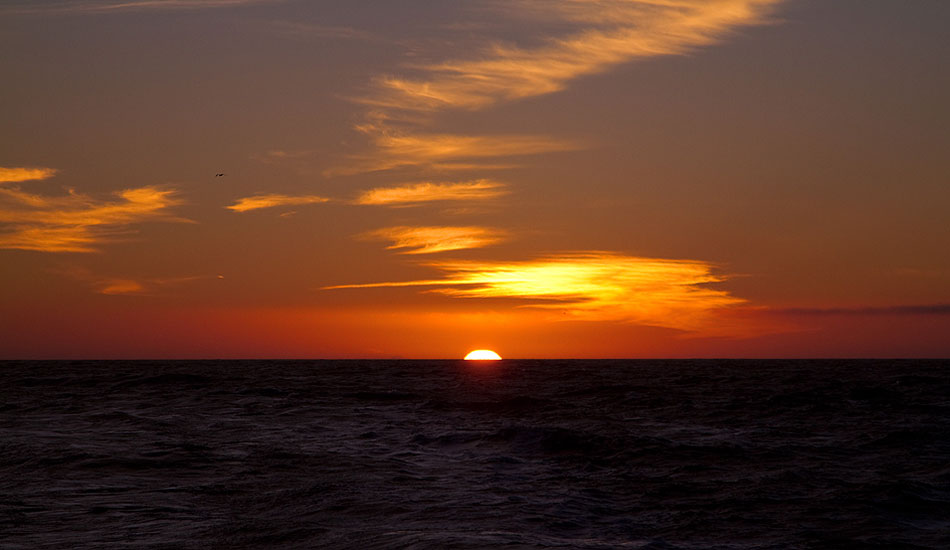 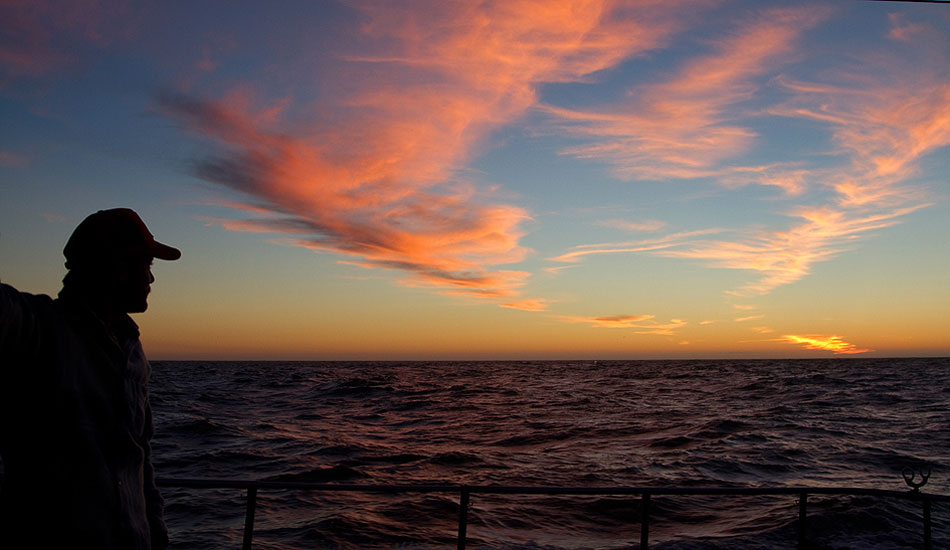 Looking west at the tail end of a good day. Photo: Seth Migdail 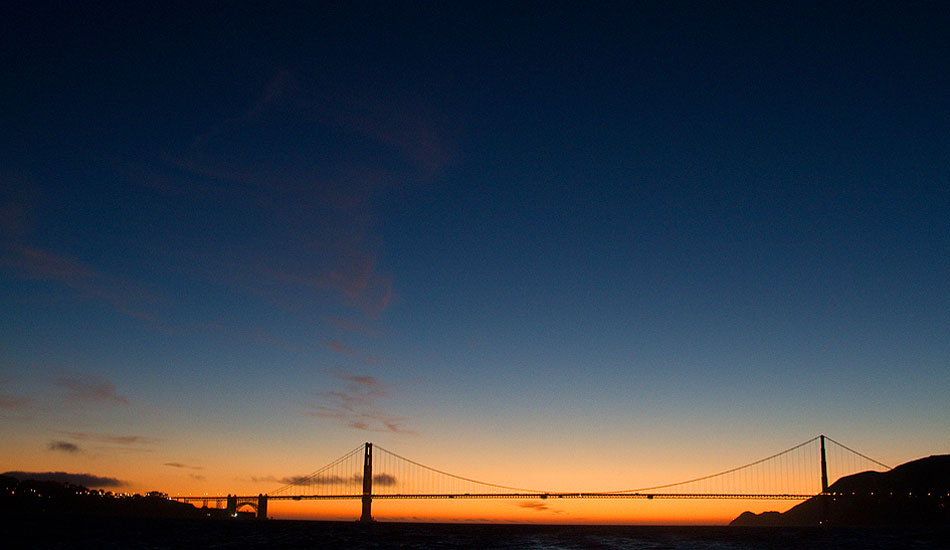 We create beauty, but not the right kind. Photo: Seth Migdail

Editor’s Note: This adventure was made possible through the support of Toyota.

“Grab the camera. He’s going to get bit,” said James Moskito, the expedition leader aboard the Superfish. He was pointing at an outcropping of rock just off Southeast Farallon Island, part of a desolate, barren chain of windswept islands thirty miles west of San Francisco.

I’ve never been particularly frightened of sharks, mostly because I don’t give them much thought. When I do think of them, however, I can’t fathom what sort of terror I would feel if I were on the sharp end of a large, aggressive shark, much in the same way I can’t fathom a number like a billion, or quantum physics or string theory. I can hear the words that explain it, but I can’t actually wrap my head around it, giving me a very vague idea of the framework, but that’s about it. It’s like trying to explain what someone’s living room looks like after only looking at the outside of the house.

It was with that in mind that I slipped into a cage submerged in the frigid waters surrounding the Farallons on a mission to face my fears with Great White Adventures, a group of self-professed shark junkies. I wanted to understand how frightened I actually was. The idea was to get into an aluminum cage that’s tied to the back of a boat, set out some seal decoys, and wait for the (hopefully) inevitable bloodbath, ideally about five feet in front of my horror-stricken eyes.

Seth Migdail picked me up and handed me a coffee on a brisk San Francisco morning at 4:58 am. We shook hands and got on famously. On our arrival at the docks, we stumbled around looking for the Superfish in the dark, eventually finding it, a bustling hive of activity with one bright light illuminating a ten-foot cage on the back. Stepping aboard, the crew shook our hands and took our waivers, the ones that said if we got eaten they weren’t liable. They have a 100% survival rate, which is somewhat reassuring, although anything that needs to tell you their survival rate, even if it is 100%, makes you think a bit.

The sun broke over the horizon as we neared the Golden Gate Bridge, painting the sky in ways that words haven’t been invented for. The others on the boat drank coffee and chatted with each other, getting to know each other as we slipped by Alcatraz and out into the open ocean.

The Farallons are the tip of something called the Red Triangle, an area rich in marine life and a favorite feeding ground for Great Whites. Extending from Bodega Bay, out to the Farallons, and down to just south of Monterey, the Red Triangle lays claim to about forty percent of Great White Shark attacks on humans in the US and ten percent of the worldwide total, according to the University of Florida, just enough to make me pretty dang sure that we would see nature’s perfect predator in action and within arm’s reach. Color me excited.

As we neared the islands, a dense fog blew in, enveloping the boat in an ominous mist and dampening our excitement. The first sign of the islands wasn’t a visual one though; it was the barking of sea lions drifting over the ocean, hinting that there was more out there than just ocean. The sun was well up now, but just a dull circle through the thick fog, trying to burn it away with its weak November strength. As the barking got louder, the clouds lifted on Southeast Farallon Island, and the sun streamed through the wisps of cloud that clung to it. Sitting out there, thirty miles from the coast of San Francisco, is one of the most poignantly beautiful places I’ve ever seen. The islands jut out of the ocean, battered by open ocean swells, stark against the horizon. At the top of the highest peak sits a lighthouse, while beneath sit two twin Victorian houses, mirror images of each other, oddly contrasting with the barren landscape and serving as shelter for the six people that stay on the island, counting birds, sea life, and diving deep into solitude. There’s something about a place where nature’s beauty can be unobstructed by our destructive hand, and I find it incredibly sad that it needs to be as small and remote as the Farallons are to escape it. It’s very apparent from the air that in between nature’s beauty lies the acne of a diseased planet. We build glistening cities, marveling at our own intelligence when we build something beautiful. Here’s the rub, though: we build it on top of something even more beautiful and built by a far more important hand… maybe not God, in religion’s sense of the word at least, but something much larger than us.

I was lost in the wonder of it all when something splashed off the side of the boat. I turned excitedly, expecting our first “predation,” the PC term for shark attack. Instead though, I saw a projectile steam of vomit.

“She looks seasick,” someone said, suppressing a gag-reflex.

“Blaaaarrgh,” agreed the seasick girl, leaning out over the railing and chumming the waters for us.

Interestingly enough, in the middle of this, James the expedition leader, a shorter, stockier, more Asian looking version of Denzel Washington, started telling me about two surfers that came out to the islands looking for a wave a few years ago. The shark tour guides encouraged them to throw a board in and wait ten minutes, just to see what would happen. One of the surfers disagreed and started to suit up, preparing to jump in.

“Grab a camera,” James told another member of the crew. “He’s going to get bit.” The surfer, hearing James’ words, held up for a few minutes. A Great White chewed his board up within minutes, and the surfers went home, leaving the wave to the sharks and Elephant seals.

Seth and I had been eyeing up a right-hander off Saddle Rock, a tiny scrap of rock that looks as though it had broken off the main island and drifted away. This was where James pointed when he told us this story. Take that one off the list.

The cage went in the water, and the first group climbed in, weighted down with weight belts and breathing through regulators on a hookah system, where air is delivered from the vessel instead of a tank on their back. Hal, the unfortunate seal decoy, went out. He is covered in tiny rips from what I can only assume were previous predation attempts. After about a half-hour, the divers emerged, shivering and disappointed.

“It’s ok!” said James cheerfully. “Sometimes it takes all day to see anything!” This was something he would say, just as cheerfully, until we headed back to San Francisco. Apparently, they even have a name for sharks showing up near the end of the day: a 2:58 attack. The boat leaves the island at 3:00.

We climbed in and out of the cage, drinking coffee and watching breathlessly both from the cage and the deck, hoping to see what we came all the way out there for. And after an entire day, most of it spent in the 50-degree water responsible for 10% of the world’s Great White attacks, we didn’t see one shark. Not one. Jellyfish floated by, pulsing gently in the current. The sun shone through the surface, tinting the water a dark and beautiful green. We waited, clinging to the bars of the cage, looking desperately into the depths, hoping for a silent, massive creature cruising slowly by, looking to deal out death. But they never showed. Sharks don’t have a schedule. And you know what? I wasn’t disappointed.

When people talk about “facing their fears,” it isn’t necessarily about one singular act. It’s about proving to yourself that you can do it. Of course, seeing a shark in the wild would have been incredible, in a heart-stopping way. But I saw something more incredible than that. In between staring out into the green and sitting topside in the shadow of Southeast Farallon Island, I saw nature in yet another light. I looked through a tiny window at one small part and, although it was tiny, it was incredibly powerful. On the way back to San Francisco, we passed under the Golden Gate Bridge again. It was lit up and posed perfectly in front of the downtown area. The sun was setting on a perfect day. And while the city and everything we’ve built can be breathtaking, it pales in comparison to what we’re destroying in the process. I went to see sharks and ended up seeing so much more.

What you do along the road to whatever your fear is can be just as important as actually facing it, and sometimes, if you’re really lucky, something like the Farallons will be on that road.

And now a message from this adventure’s sponsor:

This adventure was made possible by Toyota, who would like to remind you that we’re all born wild. The trick is staying that way. 4Runner remains a rugged beast of a body on frame. The perfect companion for those brave enough to keep it wild.