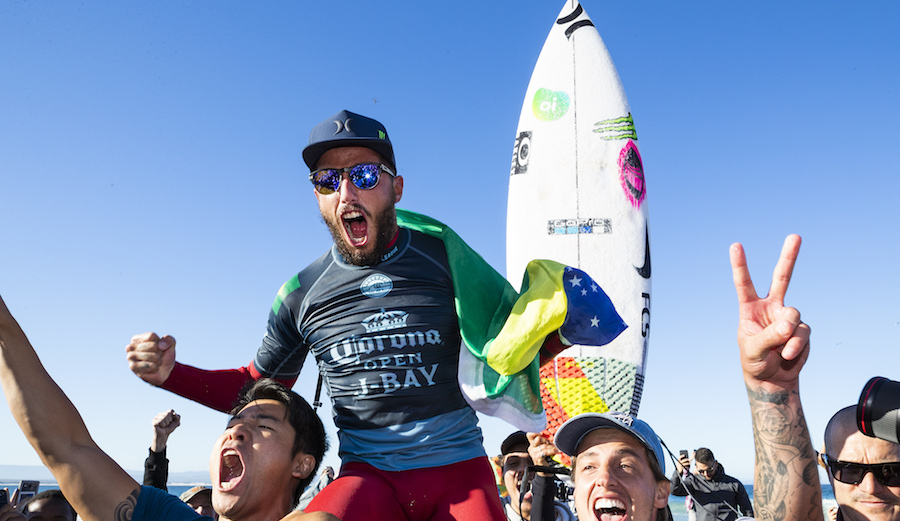 Filipe Toledo is chaired up the beach as the WINNER of the 2018 Corona Open J-Bay after winning the final at Supertubes, Jeffreys Bay, South Africa. Photo: Kelly Cestari/WSL

An incredibly in-form Filipe Toledo defeated rookie Wade Carmichael on Thursday in the final of the Corona Open J-Bay. Due to glitches in the Facebook stream, a second shark poking around the lineup, or the absence of a Facebook account, you may have missed it.

Filipe’s J-Bay repeat means that he’s sitting pretty at the top of the Jeep Leaderboard. In the wake of John John’s slump and now injury, Julian Wilson has been favored to win a world title. But, lackluster results the last few events have called that into question. Bottom line, Filipe seems hungry. ” I have so many crazy emotions. I feel like it’s my turn now,” he said. “Everything is clicking and feeling good. At this point I’ll do whatever it takes to win the heat, whether that’s running on the rocks or breaking my board. My plan was to come here and come out on top and I’m glad I was able to do that.”

This is also the second time this year Wade Carmichael and Filipe Toledo have gone up against each other in a final – the last time being in Rio – and Carmichael’s second final appearance in his rookie season. After Snapper, fellow rookie Griffin Colapinto was being lauded as the shoe-in for rookie of the year, but Wade Carmichael’s now ranked sixth.

Back to Facebook. In January, we learned of the deal struck between the social network and the World Surf League, but this contest was the first event of the year to stream exclusively on the platform – much to the discontent of a large swath of surf fans.

Objectively, the transition was poorly executed, and the WSL issued an apology saying:

“Our switch to Facebook was to enable the entirety of our audience to continue to view each event for free, and also to further expand our fan base throughout the world. That being said, we apologize for any issues you may have experienced during our transition over the last two days and we hope you continue to enjoy the Corona Open J-Bay.”

The funny thing about Facebook’s Live capability is that the page and the audience can see how many people are tuned in, and how many likes, smiles, sad faces, and frowns Facebook users are throwing out as they watch. Over the course of the J-Bay contest, those numbers were uncharacteristically low, especially given the League’s more than six million followers on Facebook alone. Viewership seemed so low, in fact, that the WSL was forced to explain.

“WSL has addressed conversations about the concurrent viewership number displayed in the top-left corner of its live broadcast, stating that the number does not represent the total concurrent audience watching the event,” explains SportsPro.

“The WSL is serving localized ads against its programming, meaning viewers are seeing the audience total for the regional stream they are connected to. The total cumulative audience is defined as the summation of all regional streams across all platforms and connected devices, meaning fans are seeing a much lower number of people viewing than what is actually the case.”

Heading into Teahupo’o Sophie Goldschmidt and Mark Zuckerberg better put heads together to deliver an experience that’s “as good if not better on Facebook,” which is precisely what they promised in the first place.