Getting in and out of a wetsuit can be a hassle. Sure, a two millimeter is relatively easy, but when you get into the four, five, six-mm range, it’s a bit like shoving your limbs through a bike-tire tube. That makes it incredibly difficult for people with physical barriers to get into one. But Finisterre, a Cornish surf and lifestyle brand with a strong environmental slant, is making it a little easier with an initiative simply called, “The Wetsuit Project.”

It’s a basic idea: Finisterre is working alongside Bodyline Wetsuits, Europe’s leading wetsuit repair center, to alter and adapt any wetsuit, regardless of the brand, to make getting into it easier.

Take, for example, the story of Andrew Birkett, who has cerebral palsy. It’s a group of disorders that affects a person’s ability to move and maintain balance and posture. Birkett doesn’t consider himself to be a surfer by any stretch. He does, however absolutely love the ocean. “CP affects mainly my legs, essentially,” Birkett explained. “I find moving around on land quite difficult. It can be quite painful; quite wearing. I think that’s partly where my love of water comes from. You’re in this environment where suddenly you’re not weight-bearing. I think that gives me a freedom that I enjoy that I don’t always get.”

But for Birkett, simply getting a wetsuit on was a huge barrier. And since the ocean where he lives isn’t exactly warm in the winter, that basically meant he couldn’t get in it. Which is bad, because, as he says, “the longer I can keep moving, the less effect CP will have on my day-to-day life.”

With that in mind, Birkett’s wife emailed Finisterre and asked for some advice. That email resulted in Birkett heading to Bodyline Wetsuits with a Finisterre suit. After a consultation about what, exactly Birkett was after, they ended up creating a custom suit with zippers up the arms and legs. A relatively simple solution, but one that made an enormous difference. 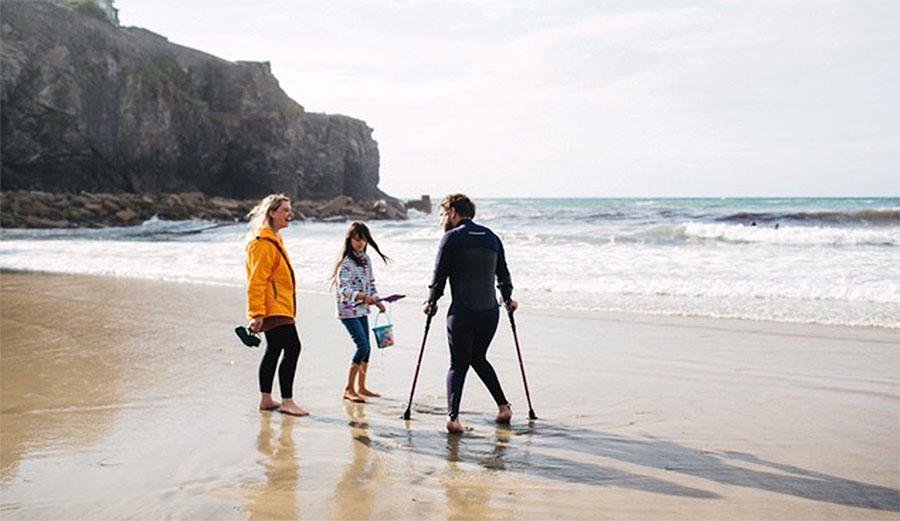 Andrew Birkett loves the ocean. Now, it’s easier for him to enjoy it. Photo: Finisterre

Then, new wetsuit in hand, he headed to The Wave, a surf pool in Bristol that uses Wavegarden technology. “People have said to me I can’t be a surfer,” he said. “I can’t do this, I can’t do that. My balance isn’t good enough, all those sorts of things. I’ve just said to them that the most important thing is just being in the water and enjoying it. It’s far more broad than just surfing a wave in the perfect style that you see in the magazines. We can all get something out of the water, and there are health benefits from being part of that.”

One of Finisterre’s founding principles is that access for everyone to enjoy our coastal playgrounds is instrumental in helping more people recognize the role our ocean plays as the blue heart of our planet. The company believes that our greatest chance to tackle the global climate crisis is by getting people in the ocean to truly appreciate it. That’s why the brand decided to launch the Finisterre Foundation. They hope it will “encourage, empower, and enable people to connect with the sea to improve their physical and mental wellbeing, whilst also providing grants to support small scale charitable projects, primarily in the UK, alongside the time, skills, and equipment to support the foundation’s mission.”

One of the Finisterre Foundation’s initiatives is called “Turn Black Friday Blue.” From November 26-28, just over three dollars from each sale on the Finisterre website will go towards The Wetsuit Project.

“Making Andrew’s film, it really dawned on me how, for so many people, wetsuits are a barrier to getting in the sea,” said Tom Kay, the Director at the Finisterre Foundation. “So I’m incredibly proud to be doing something about this by supporting the Finisterre Foundation Wetsuit Project this Blue Friday; funding the adaption of any wetsuit in the hope of making a big and immediate difference to people’s ability to get in the sea. I cannot wait to see how it goes, and who knows, maybe the industry will take notice and do something, too.”