Here’s How G.R. Tarr Became One of the Best Spearfishermen on the Planet 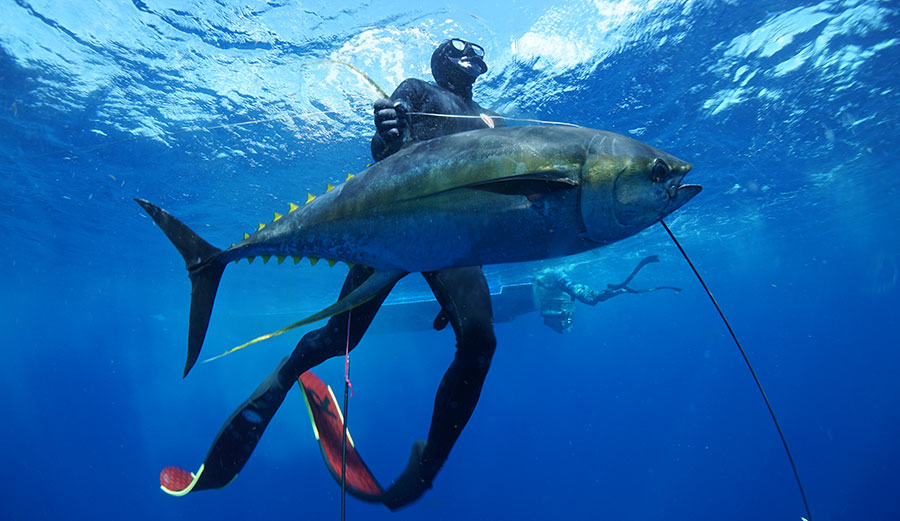 G.R. Tarr is a legend in the spearfishing world. He’s been diving and hunting fish since before he could ride a bike. Photo: Wiley Watson

GR Tarr shot his first fish before he was old enough to ride a bike. He’s not sure what kind of fish it was, but it would be the first of many. Spearfishing has become a life-long endeavor bordering on obsession for Tarr, and that deep-seated passion would lead him to be the person he is today: one of the most celebrated spearfishermen on the planet. His whole life revolves around it, which pushed him to start Red Tide Spearfishing, makers of some of the world’s finest spearfishing gear. And G.R. does almost all of it himself. “I ship gear, I rig gear, I make gear, I design gear,” he said. “My whole house looks like a dive shop. That’s kind of been my thing. I built my first speargun when I was 13 from scratch.”

Although he’d never say it himself, G.R. is a bit of a legend in the spearfishing world. “He’s so frickin’ knowledgeable about gear and setups,” said Mark Healey, a world-champion spearfisherman. “If there’s any question that I have, he’s the first person that I ask to bounce ideas off of because he’s probably tried it already.”

G.R.’s spearfishing story is book-worthy. He’s extraordinarily comfortable underwater, the kind of comfort that only comes with a lifetime of singular devotion. Routinely hunting at 100 feet, deeper if necessary, he speaks with a humble reverence for the sport.

“I learned to spearfish before I could ride a bike,” he told me. “I think it was like, 1965. I was five years old. My parents spearfished, but they weren’t big into it. We had a stilt-house on the water in the Tampa area that my godfather built called the Sea Ranch. I learned early to snorkel — I just took to it as a little kid. I don’t remember the actual first fish itself, but it was just little snappers, little groupers, stuff like that.”

As he got older, things naturally progressed. From our conversation, it doesn’t seem as though he had a competitive drive to become one of the best in the world — it just sort of happened because he loved doing it. Which, it could be argued, is the purest path to greatness.

“When I got a little older, like in my early teens, I met a few guys,” he remembered. “I went to a summer camp down in the Keys, and I got to do some tank diving and see the reef and see the ocean and be really exposed to some other stuff I hadn’t been exposed to before. I was telling (some friends) about it, and they all really wanted to do it, so we convinced our parents that one of us had a driver’s license — none of us did — and we took a friend’s mom’s car and drove it down to Key West. We were like 15 years old. Got a bunch of fish and had a really good time, and it pretty much went from there.”

A few years later, G.R. read a book called Last of the Blue Water Hunters that basically changed his whole outlook on what was possible in the water. “At the time, I never dove for blue water fish before,” he told me. “I’d never heard of anyone spearing tuna or marlin or wahoo or a sailfish. I’d caught them hook and line, but I never heard of anyone spearing one. These guys had these big guns with six bands, and I saw that and I was like, ‘I gotta do that.'”

He sketched out a few designs of guns from the photos in the book, built a few, and decided to try them out on a trip that turned out to be wildly successful. “I made a couple of guns and we went down to Costa Rica,” he said. “The first time we went out, we shot 12 tuna and they were all over 250 pounds. It was the most insane trip ever. Next thing you know, we got into Spearfishing magazine and people were calling wanting to know how we did it; ‘what’s this, when, where, hows’ and all that.”

That ultimately led to the creation of Red Tide Spearfishing, a venture that G.R. started because he did what every good entrepreneur does: he found a need and filled it.

“No one had internet shops back then,” he said. “Riffe was out there, Wong was out there, a few European brands, but it was a pretty small thing. I could see the bigger picture, though. There was a lot of room for improvement. A lot of people who weren’t super business savvy. I saw an opportunity so I started making speargun shafts. Everyone needs them. I started making a thousand at a time. Next thing you know, I’m selling shafts to dive shops and gun makers and I was just kind of known for shafts. Then I had a reel that broke and realized I could design a better one. It all just built up over time, just figuring out what could be made better. It’s really been fun to design stuff: knives, float lines, reel line, pole spears… everything to do with a speargun.”

The world has changed a lot since then, however, and when it comes to marketing Red Tide, G.R. is taking an honest, word-of-mouth type of route.

“Social media has changed everything,” he said. “Some guy can make something that’s not tried and true and blow it up on social media and start selling a bunch to people. I’m not a social media whore. I’m not on there every day, but I have to stay relevant. I’m not a big look-at-me kind of guy. I mean, I’ll promote when I can, but I don’t have a lot to prove. That’s the hardest thing, you know? There are some guys out there that are on there every day, and I just don’t want to be obnoxious. I just want to do it my way. Be good at what I’m good at and keep designing cool stuff.”

Now, all these years later, G.R. is still diving as much as ever. Having won multiple world championships and basically done all there is to do in the spearfishing world, he’s not doing it for anything other than what got him into it in the first place: plain old passion.

“My depth is I go as shallow as I can,” he said when I asked him what his average depth was. “Physically, I can go 130-140 feet. I can do it, but I try to find the fish wherever they are. When you’re diving really deep like that — you can’t dive that deep all day long. Maybe ten drops. You get tired, and once you get tired, you don’t want to be diving that deep. I can comfortably hunt at 100 feet almost all day, but I dive shallow all the time.”

Although there are plenty of courses out there for people who want to learn how to hold their breath for longer, G.R.’s never taken one. Instead, he simply kept diving and learned the techniques himself. He took his time doing it and although blackouts are an occurrence for freedivers, G.R. hasn’t had the misfortune of experiencing one.

“I’m really lucky,” he said. “I’ve had friends that have taken (courses) and they’ve shared that information with me, and that information has helped me become a better diver for sure, but I’ve never actually taken one. Of all the guys that I know personally, there are only a couple that dive as deep as me.”

The spearfishing world, much like the surfing world, isn’t huge. It’s held together by a relatively small group of people who mostly do it for the love, and over the years, G.R. and Mark Healey formed a bond. They first met when Healey was young, just starting in on his life of chasing big waves and big fish.

“I met him on a trip — God, it had to be like 15 years ago — he was just a kid at the time,” G.R. remembered. “We had an opening pop up on one of our trips and a buddy of mine knew a guy that knew him, and he was like, ‘I met this guy who’s a surfer we could bring.’ I said, ‘we’re not taking some 20-year-old surfer on a spearfishing trip to go shoot tuna.'”

Although G.R. thought Healey was too young and too inexperienced to join the group, Healey proved his worth quickly. “We met him at the airport, and he’s just this little freckle-faced kid,” G.R. said. “We got out to the first spot, and you know, I’m a deep diver, so I was down at 100-feet at the end of my float line, just waiting for a tuna to come along. I look over, and there’s Mark right next to me. I thought to myself, ‘that little fucker can dive!’ So he’s next to me and I’m holding my breath — maybe two-minutes at this point; a solid dive — and I came up to the surface, and he’s still down there. I’m waiting up there, maybe 20 seconds, and he still hasn’t come up yet. I think, ‘oh, shit, he’s going to die.’ So I look down, and there he is swimming up pretty fast. He hits the surface and goes, ‘I saw a big tuna! I saw a big tuna!’ I knew from there this guy could dive.”

Healey remembers the story, as well. When I told him that G.R. initially didn’t want him on that first trip, he laughed. “After we did a few drops,” he said, “I was like, ‘oh, this old guy can dive!’ But G.R., especially at that time, was probably the most experienced guy in the world when it came to chasing big tuna and stuff like that… that was my first time seeing giant yellowfin tuna in the water. It was crazy.”

It’s been a long road for G.R. An enjoyable road, but a long one. From the time he shot that first fish right up until today, GR.’s love for the sport hasn’t wavered. But even after all the years, all the accolades, and how much spearfishing has shaped his life, G.R. still looks at it through a very simple lens. “For me,” he said, “it’s just fishing. I just want to have a good time and tell stories afterward. I don’t want to have someone telling stories about me afterward, you know?”