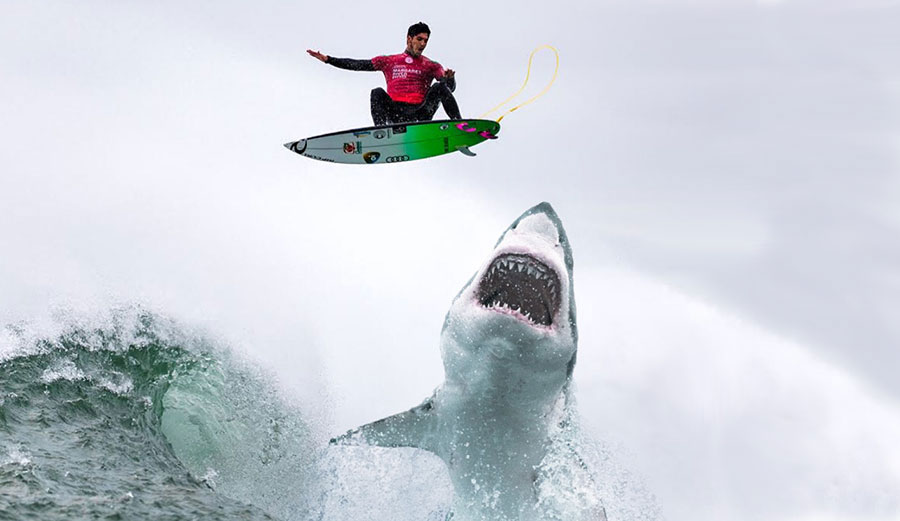 Has the WSL jumped the shark?

You have heard by now that the Margaret River Pro was called off because sharks are everywhere. It’s salmon run season in Western Australia, after all. Sharks gotta eat too, and salmon is delicious. Two people were attacked a few miles down the coast from the event, one torn to ribbons and the other getting just a scratch. John John Florence found two via drone in the days leading up to the event.  The WSL called the event off, called it on, then called it off. Now, in the wake of all that sharky activity, Gabriel Medina and Italo Ferreira are voicing their concerns on social media.

“Today they had two shark attacks on a beach close to where we’re competing,” wrote Medina. “I do not feel safe training and competing in this kind of place. Any time anything can happen to one of us. Hope not. Leaving my opinion before it’s too late!”

Soon after, Italo chimed in with a similar post. “Two shark attacks in less than 24 hours here in Australia, just a few miles from where the event is being held. Very dangerous, do not you think? Even so, they keep insisting on doing steps where the risk of having this type of accident is 90%, so I ask: is not the safety of athletes a priority? We already had several alerts. Life is worth more! I hope it does not happen to any of us. I do not feel comfortable training and competing in places like this!

I don’t know about you, but if I were to be in the area where two shark attacks had occurred very recently, a couple of dead pilot whales were floating around, and a river of salmon was running, I would also be a little concerned. It would have to very, very good for me to paddle out. Both Medina and Ferreira have valid concerns—although the likelihood of a shark attack is still very slight, it does seem dumb to tempt fate for the sake of a few heats. So what to do? Well, it seems that no one really knows, which is understandable.

“The WSL continues to assess the current situation at the men’s and women’s Margaret River Pro where there have been two confirmed shark incidents near Gracetown in the last 24 hours,” the League wrote. “We have actioned our well-established safety protocols and are gathering all the latest information to determine next steps. We will continue to liaise with all involved, most importantly the surfers, their safety remains paramount. Today’s competition (Tuesday in Western Australia) has already been called off and all surfers have been advised not to surf in the area. We are constantly evaluating the situation, and will update as soon as possible.”

If the World Surf League does decide to pull the plug on the entire event—which seems unlikely—every surfer would leave with either a 25th place or a 13th place, effectively scrubbing the event from the final standings. It could, however, have a different effect. Depending on the surfer, different events play to different strengths.

So while time will tell exactly what happens with the Margaret River Pro, something worth thinking about for the WSL is to maybe, just maybe, not run a surfing event when shark activity is highest?