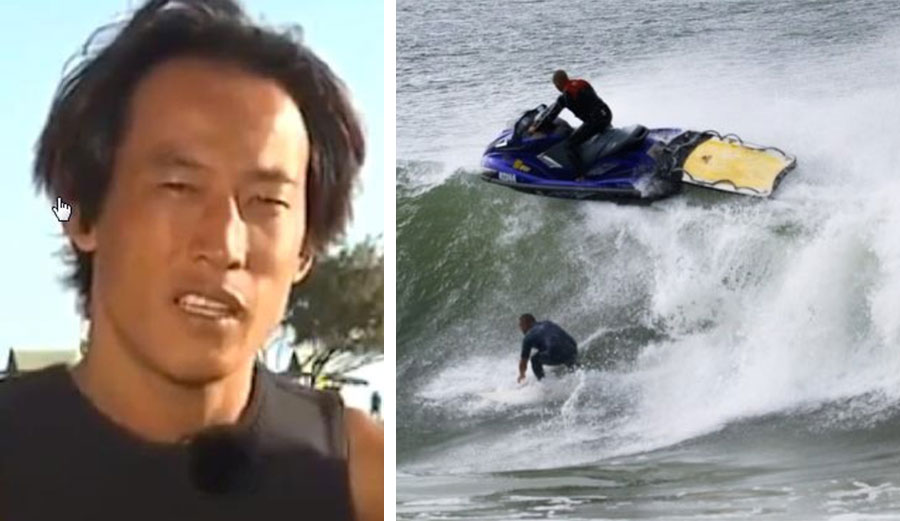 Sam Yoon has had enough of Jet Skis in the lineup. Photos: (L) Channel 9/Luke Workman/Instagram

Crowds suck. They suck almost everywhere on earth, but they suck the most in the lineup. And you know where some of the most crowded lineups on earth are? The Gold Coast of Australia. What can make crowds even worse than they already are, you ask? Jet Skis, that’s what. And I don’t mean the people doing step offs at giant Puerto or towing into 40-foot Jaws–I mean the people doing step offs at 6-foot Currumbin, just a few feet away from everyday surfers like Sam Yoon, a surfer from Tugun, Queensland.  Although there are rules in place regarding PWCs, Yoon thinks that someone’s going to die before they’re properly enforced.

“Someone’s life is not worth a six-foot wave,” he recently told the Gold Coast Bulletin. “Even a kook (an inexperienced surfer) has the same rights out there as guys like (eleven-time world champion) Kelly Slater.”

Back in March, Yoon took a stand after he alleged that “high-profile professional surfers” on Jetskis surrounded him while he was surfing and threatened him. “They tried to run me over,” he said to Coastalwatch.

While he decided not to press charges after filing a police report, he still wants to raise awareness of just how dumb it is to operate a Jetski in a lineup filled with regular surfers. He does, however, admit that there’s a time and a place. “They should be there for safety issues, not for the ego of getting all the waves,” he explained. “There’s no problem using them away from people at bombies (reefs) offshore or off Kirra in historical swells.”

Perhaps the most notable example of the recent madness came from 16-year-old Luke Workman, who was taking photos at Currumbin Alley when he shot a close call between a PWC operator and a surfer.

Yoon’s not the only one who’s pissed, either. With this last run of incredible swell banging into the Goldie, an “unprecedented number of Jet Ski tow-in surfers” inundated the area despite very specific maritime codes of conduct. According to Maritime Safety Queensland, if you’re on a Jet Ski within 200 meters (about 650 feet), you can’t go faster than six knots, which makes perfect sense… unless you’re a total dickhead. Apparently, there are a lot of dickheads bombing around, though. It’s just like real life!