Greg Long and the Upper Limits of Big Waves 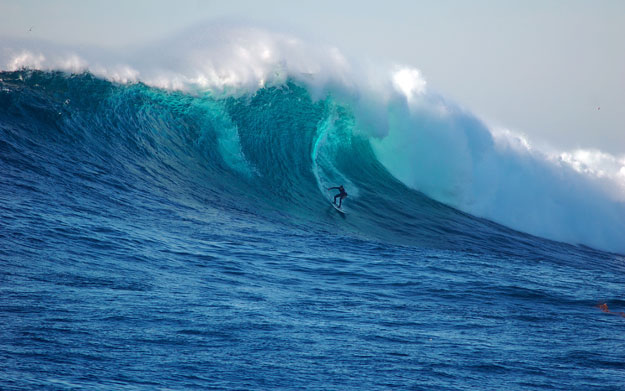 Greg Long, doing what he does at Cortes. Photo: Chris Dixon/ghostwavebook.com

Chris Dixon’s new book Ghost Wave provides insight into the exploits of a select group of big-wave surfers such as Mike Parsons, Brad Gerlach and San Clemente’s Greg Long, who are redefining the limits of big-wave surfing.

Long, 28, who has won several Billabong XXL Big Wave Awards, the 2009 Eddie Aikau and the SIMA Waterman of the Year Award, has become a surfing icon for his solid, low-key, intense and strategic approach to surfing the world’s largest waves.

He has given back what surfing gave him by working with organizations such as the Surfrider Foundation, Save the Waves, San Onofre Foundation and WiLDCOAST and is “among the most humble, well-rounded and cerebral athletes I’ve ever met,” said Ghost Wave author Dixon.

“The other thing that sets Greg apart, and it’s a trait Kelly Slater has too, is an ability to remain focused on the job at hand while he has such a whirlwind and cacophony of distractions going on around him.

“As a prime example,” Dixon said, “I don’t think another big-wave surfer alive could have pulled as many strings, levers and pulleys as he did to make the first major Cortes Bank paddle in mission happen in 2009—a mere two weeks after he’d won the Eddie Aikau.”

Serge Dedina: How did someone who grew up in San Clemente become a professional big-wave surfer? What got you hooked on big waves?

Greg Long: My father was a lifeguard for 38 years. He introduced us to the ocean before we could walk. As we grew up, he instilled every ounce of ocean knowledge that he had into us. Because of this, I always seemed to feel comfortable in the ocean no matter the conditions. As I really started surfing at age 10, I was naturally drawn to bigger waves because they were so much more challenging. Over the years my surfing ability slowly progressed and continued to challenge myself in larger and larger surf.

Dedina: You’ve been credited as being part of the group that is now really pushing the envelope on paddling into massive waves. What is your goal in terms of wave size? Have you already reached the limits of what can be surfed?

Long: From a paddle-in perspective, I think we are getting close to the upper limits of how big we can safely go. What you are going to start seeing now is people paddling into new waves, which were typically thought as being un-paddable like Jaws or Cortes bank. However with the implementation of Shane Dorian’s new V1 wetsuit we just might be able to push the limits a little further than we had previously thought. As far as tow-in surfing goes, there is no limit to how big you can ride as long as the conditions permit.

Dedina: How are you training in terms of physical exercise, diet and mental preparation?

Long: I train every single day in some form or another to prepare to ride big waves. The main activities are yoga, swimming, cycling and running. I also have a very clean diet, mostly vegetarian. Your body is essentially a machine. If you put bad fuel into it, it won’t perform as efficiently as it should.

Long: I couldn’t name a single favorite big-wave break as my favorite but my list of favorites would include: Mavericks, Todos, Jaws, Cortes Bank. My favorite country to travel to is South Africa as it offers the widest array of surfing breaks imaginable. From perfect points to huge slabs, it has it all. Not to mention it’s stunningly beautiful with amazing people.

Dedina: Do you work with a forecaster or are you continually evaluating wave models and weather reports to determine where to travel to find waves?

Long: I do most of my surf forecasting on my own. I have been following and monitoring swells in great detail for well over 10 years now so I feel I have a pretty thorough understanding of each of the waves I surf and what they need to make them tick. I do, however, confer with Sean Collins from Surfline and Mark Sponsler from Stormsurf.com anytime I doubt or question a decision during a significant swell.

Dedina: Your father, Steve, was a legendary California State Park lifeguard, park ranger, superintendent and now a conservationist who helped to defeat the proposal to place a highway through San Onofre State Beach. How much of an influence did he have on your choice of career path? Do your parents still worry about Rusty and you when you are out surfing huge waves in off-the-charts locations?

Long: Both my mom and pop have been incredibly supportive of our careers. Growing up they never pushed us in any certain direction but rather let us find our own paths and what made us happy. My mom still refuses to come watch us surf when it’s big but loves hearing the stories and seeing the photos afterwards.

Dedina: You’ve won the Billabong XXL Ride of the Year Award and the Eddie Aikau. How do you top that? What is next for you in terms of your career and surfing goals?

Long: I surf big waves because I love it. Simple as that. Winning contests or XXL awards have never been and will never be the focus or motivation for my career. My goal in life is to be happy, live a healthy, positive lifestyle and hopefully inspire and encourage others to do the same along the way.