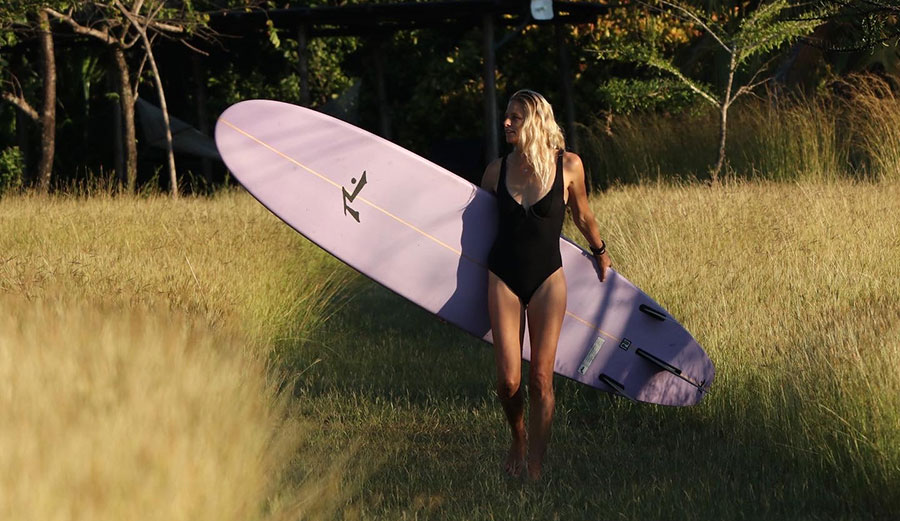 Editor’s Note: This feature was made possible by our friends at Rusty Surfboards.

Holly Beck has lived an interesting life. It hasn’t been a nine-to-five existence. She hasn’t toiled away at a desk under the bright, flickering glare of fluorescent tube lights. Instead, from an early age, she pointed herself in the direction of things she loved and created a career that revolved around them.

For the last eleven years, she’s been running Surf With Amigas, a surf retreat with camps in Nicaragua and Costa Rica. When I spoke with her, she had just moved back to California with her two young children, where she’s working on her Master’s in Counseling. That’s on top of a Master’s in Marketing (that she earned at the same time as competing on tour) and an undergraduate degree in psychology from UCSD. She’s an accomplished person, to say the least. Driven. Dedicated. And she does it all with a certain kind of relaxed attitude that suggests none of it is all that difficult for her.

She eventually began competing on her high school’s surf team, and within a few years, her first-ever sponsor, Rusty, took notice. She heard through the grapevine that the surf brand was looking to sponsor a few girls, so along with a few friends, she put together a portfolio of sorts. Within a few days, someone in Rusty’s marketing department called her up and said they’d hook them up with some shirts and stickers if they wanted to swing by the office.

“My friends weren’t available, so I just went as our representative,” Beck said. After trying on a few items of Rusty apparel, she was introduced to a couple of employees. “Then they invited me to go on a photoshoot in Cabo. I thought we were going on a surf trip, but it turned out to be a modeling trip. I was with all these other girls who were models. I was 16 and such a tomboy. I had a full board short tan and scraped knees from skateboarding.”

Beck, by her own admission, was not the modeling type — she was the surfing type. While there, she went surfing with one of Rusty’s sales reps and they noticed just how good she was.

“He put in a good word for me,” she laughed. “When I came back Rusty said, ‘let’s make you a board.’ And that was it. All of a sudden there was a picture of me in SURFER magazine. In the early days, I felt like I had something to prove: I wasn’t a model. I was a surfer.”

She kept it up through college at UC San Diego. It was around that time that she had an inkling that her surfing was good enough to take her on a career path that could include world travel, and the best waves on Earth. 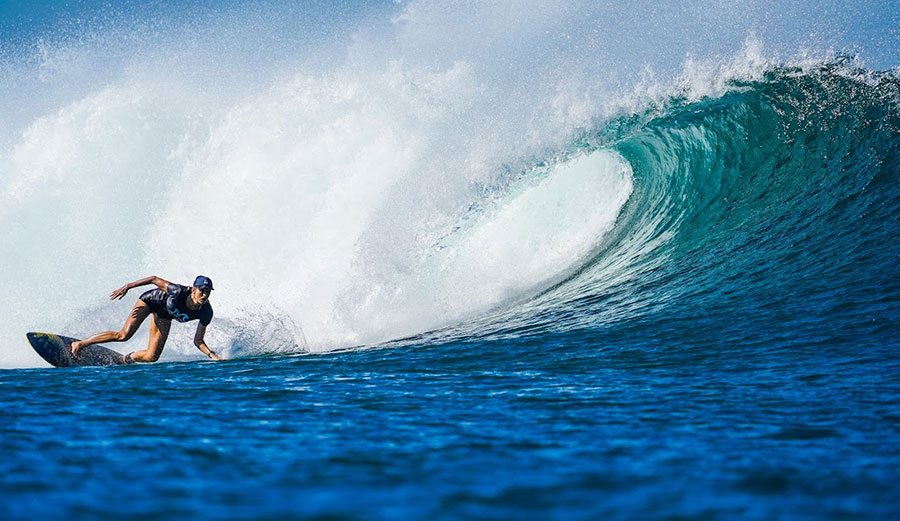 Beck found a way to spend her life close to waves like this. Photo: Courtesy of Holly Beck

“I started to realize in college that pro surfing was a possibility for me and it wasn’t this ridiculous fantasy,” she remembered.  “I started doing pro-am contests and photo trips and all of that. Then I hustled and finished college in three years and won an amateur national title.”

That was when she officially turned pro. She fared relatively well under the pressures of competitive surfing and traveled the globe for a decade. She even starred on a few reality television shows back in the early days of reality TV, which was an experience she enjoyed. She sounded slightly hesitant to talk about it when I first asked, but the experience was a positive one overall.

“It was exciting; a great learning experience,” she remembered. “I was so aware of everything I said or did. I was really conscious about wanting to be a good role model because I have little sisters. I wasn’t really thinking about the world seeing it — I was just conscious that my sisters would see it.”

She wasn’t all that comfortable in front of the camera in the beginning, though. But Beck figured out an interesting way to deal with it. “I was always really shy and didn’t have much self-confidence, but in order to be successful in the surf industry you have to kind of wear this mask that says ‘I’m a pro surfer and people think I’m cool,'” she said. “Even if I don’t believe it, I’m going to put this mask on and play this part… I would just play a character: ‘I’m Holly Beck. She’s funny and people like her. I’m going to step into that character.’ That made it easier.”

Then, in 2008, she decided to call it quits. She realized that she likely wouldn’t win a world championship, and her passion for competitive surfing was waning. “I got tired of the non-stop travel and felt like I wanted to do more,” she said. “I sort of thought I was going to work in the surf industry, but I didn’t want to start out as a sales rep. I wanted to be in the marketing department.”

On the advice of a mentor, she decided to get a Master’s in marketing. During the course of that program, she was required to write a business plan. She put her head down and wrote one for a surf school in Nicaragua, where she had been spending a fair amount of time at the end of her pro surfing career. The idea stayed in her brain and started to blossom into something that could be a reality.

“Right about the time I quit competing, I went to Nicaragua and bought some property,” she explained. “I convinced my boyfriend at the time that we could sustain ourselves down there, so I dusted off the plan, tweaked it a bit, and basically put it to work. We started Surf With Amigas in 2010.”

Her sponsor, Rusty, was on-board with the idea of her leaving the tour. “I said ‘I’m getting quarterfinals or whatever, and it’s not like there’s any coverage of these contests anyway, so what if I went on the free surf path and do photoshoots and trips instead?'” Beck said. “They were supportive of that.”

Her reasons, in the beginning at least, for starting Surf With Amigas were simple: she wanted to have fun. Despite the fact that she left pro surfing because of the near-constant travel, she missed the adventures that came along with it.

“When I quit competing, the thing that I missed most about being on tour was having the crazy adventures with my silly friends who were the best women surfers from all over the world,” Beck explained. “I was living in northern Nicaragua where there were hardly any ex-pats. The ex-pats who were there were all dudes, so I was like, ‘I need to import some friends.'”

Surf With Amigas was a relatively novel concept at the time. There were other surf camps in the area, but Beck’s was built differently from the foundation up. While other retreats were either solely focused on learning to surf or giving a surf-centric luxury getaway, Surf With Amigas was more about adventure.

“I really like having adventures,” she said. “I was like, ‘okay, the accommodations are going to be a little bit more rustic, but we’re going to get the most badass female surf instructors that are going to be your friends and role models, I’m going to pay them really well — most of the other surf camps were just doing work trades at the time — I’m going to pay them well so they stick around. It was more of an empowerment-surf-adventure type thing. Instead of just a luxury thing with facials in a nice villa, we wanted to get down and dirty and gallop down the beach on horseback. We’re going to slide down volcanoes and put you beyond your comfort zone in big waves. We’re going to film everything and give you all the techniques to be the best you can be. I feel like we were the first to use that formula.”

The idea was a hit, and it quickly took off. Not only was Beck getting to have her adventures, but the women who joined her had found something that was sorely missing. Slowly, the retreat began to morph into what it’s becoming today: a place that can actually change a person’s life, and not just because they learned to surf. Which is why she’s currently en route to a Master’s Degree in counseling.

After eleven years living in Central America, though, making the adjustment back to the United States has been slightly rocky. Her children, aged 5 and 7, are dealing with it better than she is.

“It’s a bit of a struggle at times,” she sighed when I asked her about the move. “It’s been a minute now. I moved back at the end of August. I have kids and they’re school age. I pushed it as long as I could, but I decided it was time to go back so they could go to school.”

The move wasn’t just because of school, however. She wants her kids to be well-rounded and capable, confident in themselves and their abilities, whether they’re on a deserted beach or in a big city.

“Part of coming back here is that they get the best of both worlds,” she said. “They know how to be jungle kids and catch lizards and they’re not afraid of scorpions and all of that, but then they’re also learning to navigate the First World stuff, which is important too.” 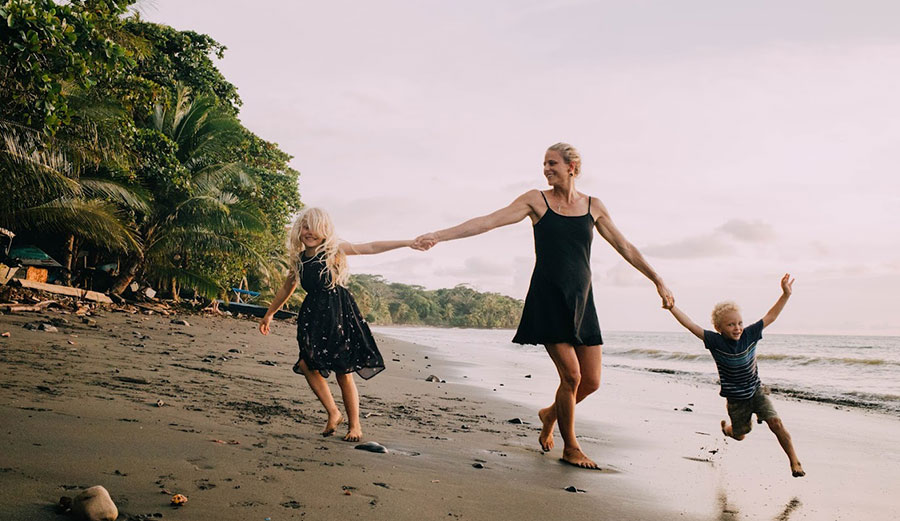 Holly Beck’s children are learning to navigate the world through experiences. Photo: Courtesy of Holly Beck

Now, with her eyes firmly planted in the direction she wants her life to take, she’s got a road map. With her Master’s in counseling, which she’s on track to finish in June, she wants to turn Surf With Amigas into something that will help people live fuller, richer lives. Over the course of her years coaching other women, she began to notice similarities in how people surfed and issues they were dealing with in life.

“My goal is to approach surfing and surf coaching from a more holistic perspective,” she explained. “I noticed through doing the retreats that I would see parallels between the way that someone approaches surfing and their life story. Whether they’re worried about taking up too much space, or a fear of commitment, or the opposite, not caring about anyone but themselves…. If someone can figure out a way to deal with their anxiety for the sake of catching that awesome wave, then they have an incentive. If we can work on tools on how to manage that anxiety in that context, then those tools can be applied in the rest of their life. It’s not just going to change their lives because they learned how to surf. I want to help them live the rest of their life better. It’s a lofty goal, but that’s the goal.”