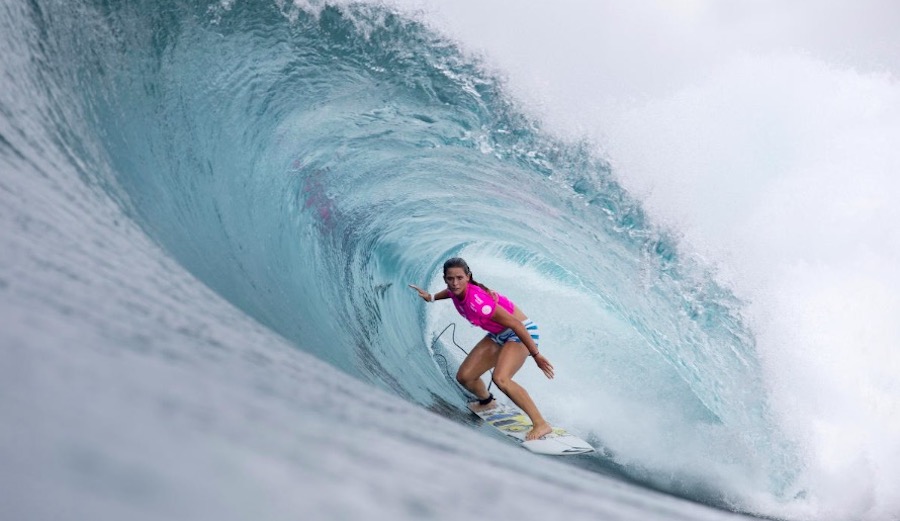 The winter season on Oahu’s North Shore is widely regarded as the culmination of all things competitive surfing. Except for the fact that over the years women have largely been shut out entirely.

Between the Triple Crown events (that is, Haleiwa, Sunset Beach, and Pipeline), and other specialty contests throughout the Hawaiian winter, the North Shore has played host to some of the most dramatic performances in surf history over the years. But, in 2019, as in years past, not one event included a women’s division. Instead, the women’s Championship Tour concludes on neighboring Maui in November – well in advance of, and sequestered from, the fanfare of the Seven Mile Miracle. But things may be changing.

On Tuesday, the Honolulu City Council’s Committee on Parks, Community Services, and Intergovernmental Affairs will vote on a resolution aimed at encouraging regulators to enshrine gender equity in the city’s permitting process for surf contests. If it passes committee, it will head to a full council vote as early as the end of the month.

According to the text of Honolulu City Council Resolution 20-12, major strides have been made in recent years toward equity in competitive surfing, including the World Surf League’s September 2018 announcement to institute equal pay across its Championship Tour, Big Wave Tour, and Longboard Tour events with an eye toward its countless other sanctioned events. But, the lack of representation of women each winter in the Triple Crown (not least of which the Pipe Masters), and the lack of language in the permitting process to include women, the resolution argues, creates a loophole for discrimination.

Resolution 20-12 would fall short of putting any stipulations into law, but if adopted, it would strongly urge Honolulu’s Department of Parks and Recreation and the Department of Land and Natural Resources to adopt new rules for granting permits for surf contests including mandating that any and every event feature a women’s division. The resolution also calls for restructuring the Mayor’s Surf Advisory Committee – a public-member committee that consults with Honolulu’s mayor over surf-related issues and is comprised entirely of men – to include an equal number of men and women.

That the city council is even deliberating on a resolution of this sort is due largely to the work of North Shore women’s surf contest promoter, “Banzai” Betty Depolito, the Committee for Equity in Women’s Surfing, which has been at the forefront of the gender equity movement, famously taking the fight to Maverick’s in 2018, and Carol Phillips who runs North Shore Surf Girls. Together, the women have formed a coalition and gotten the buy-in of Councilmember Heidi Tsuneyoshi, whose district includes the North Shore.

“We’ve had a lot of meetings, as you can imagine, leading up to this,” said Sabrina Brennan, one of the founding members of CEWS. “The purpose of the resolution is to give direction to Parks staff on the need to make changes to the city’s Shore Water Rules. This would help clarify what lens they need to be looking at the rules through.”

To be clear, passage of the resolution doesn’t mean that the World Surf League would be mandated to include a women’s division in events at Haleiwa or Sunset Beach or even a women’s Pipe Masters effective immediately. How this evolves and the speed with which it does, Brennan says, will largely depend on what happens next.

“I hope we’re close,” Brennan told me. “I see it as a process. Not everything can be fixed overnight. I don’t see that as realistic, but I think that there are some pretty obvious things that can be changed and that’s going to be a public process. People will be able to give input.”

If our Facebook comments section is any indication, public input will undoubtedly give way to at least a few comments around the idea that either women cannot surf Pipeline or Sunset Beach, or that even if they could they overwhelmingly don’t want to.

But, in July of last year, we polled a number of surfers on the women’s tour and found that around forty percent have surfed Pipeline before or would be interested in having an event there. And admittedly that number could be much higher as some women simply didn’t respond to our request for comment.

What’s more, Sunset Beach has played host to a women’s contest in the past until it got clipped from the CT schedule in 2011.

However, if Resolution 20-12 continues to receive the level of support it’s gotten so far and permitting rules are changed as a result, the question of whether the women’s tour should conclude at Pipeline may actually be moot. It may soon be against the rules if it doesn’t.

Update (9:00 a.m. PST January 22, 2020): On Tuesday morning, Honolulu City Council’s Committee on Parks, Community Services, and Intergovernmental Affairs voted unanimously to approve Resolution 20-12. It will now head to the full City Council for a vote in the coming weeks. More as the story develops.