Female Surfers Want to Finish Their Season at Pipeline, Too 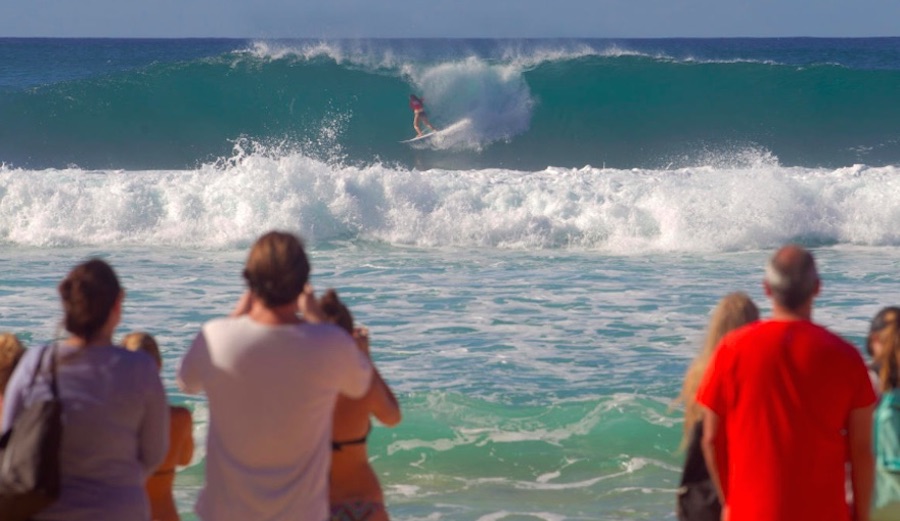 The storyline of the 2002 classic Blue Crush is fictional. There’s never been a women’s CT event at Pipeline/Backdoor. Maybe it’s time to rethink the schedule? Photo: Masurel/WSL

In the climactic scene of the 2002 film Blue Crush, Keala Kennelly paddles toward Kate Bosworth’s character, Anne Marie, who’s stricken with terror watching the waves roll through at Pipeline from the shoulder. “What are you doing?” Kennelly asks before proceeding to coach Anne Marie into a maxing set wave during their heat at the Women’s Billabong Pipe Masters. Anne Marie promptly cartwheels over the handlebars and gets bumped around on the reef. Realizing it wasn’t so bad, she finds another wave, makes it, gets a solid score, gets the guy, and the rest is cinematic history.

Everything in the iconic scene is appropriate for the early 2000s surf boom: Kennelly’s below-the-knee boardshorts, the singlets with the women’s Billabong logo on the front and back, and ASP logos on the shoulders. Viewers previously unfamiliar with the professional surfing women’s circuit who saw the movie in theaters at the time, though, would be forgiven if they believed the contest depicted in the film was based on a real one that happens on the North Shore annually.

In the real world, a women’s Pipe Masters has never existed, despite the general public’s honeymoon with women’s surfing in the early 2000s (thanks to Blue Crush) and, more recently, 2018 being heralded as pro surfing’s “Year of the Woman” with the equal pay movement.

But for the last few years, the Women’s CT has finished in November on Maui, even though some of the top female surfers have competed in exhibitions and lower-profile contests at Pipe. Some even told us they’d love to finish their season there. Nothing against Honolua Bay, but the activity on the cliffside pales in comparison to the excitement on the beaches of the North Shore of Oahu in December. So, why don’t the women finish at Pipe?

In the Encyclopedia of Surfing, venerated surf historian Matt Warshaw characterizes Pipeline as having justly earned the reputation as the most dangerous surf break in the world.

“Waves here break with piledriving force over a shallow reef (usually between six and 10 feet deep), and can be difficult to read; the omnipresent photo gallery attracts surfers, and helps create an aggressive mood in the lineup, which in turn leads to bad wave selection, insane risk-taking, injuries, and even death,” writes Warshaw. “It is estimated that a surfer dies at Pipeline every other year. On a single day in December 1998, there were 30 injuries at Pipeline, including a near fatality.”

Pipe doesn’t discriminate between pro and Joe, either. Both Owen Wright and Dusty Payne, both gifted surfers, suffered debilitating head injuries there in recent years.

Complaints about Pipeline simply being too dangerous for girls or a lack of interest to compete there are some of the common rationalizations as to why the most photographed wave in the world doesn’t have a women’s CT event.

Whether because of its ferocity or the lack of appeal of wading into arguably the most testosterone-laden lineup in the world, few women have gained notoriety chasing set waves at Pipe and Backdoor when the surf gets big. Rochelle Ballard, who worked as Kate Bosworth’s stunt double on Blue Crush, counts herself among the first.

“I was the first woman to ride bigger barrels out at Backdoor, Pipeline, and Sunset Beach,” said Ballard in a 2016 interview with women’s sportswear brand Athleta. “Before doing so, I was told by many I couldn’t do it. Going into a challenge of that magnitude with negative energy was difficult for me, but it also gave me strength.”

Complaints about Pipeline simply being too dangerous for girls or a lack of interest to compete there are some of the common rationalizations as to why the most photographed wave in the world doesn’t have a women’s CT event, or this year even a Qualifying Series contest, while the men have one of each.

In the seventies and eighties, “Banzai” Betty Depolito was one of the first women to surf Pipeline, Sunset Beach, and Waimea Bay. In 1990, she helped organize the first Surf n Sea Women’s Pipeline Pro that began as an event for female bodyboarders at Pipeline and later evolved to include surfers. Between 2006 and 2018, the event was rated by the World Surf League as a Qualifying Series 1,000 contest – the lowest point rating for a WSL-sanctioned QS  – but for 2019 it was removed from the schedule entirely due to what Depolito described as “budget concerns” on the part of the WSL. The event went on this year anyway but without offering valuable points towards Championship Tour qualification.

“When I did my Pipeline events, (the WSL) didn’t have any girls events (there),” Depolito told The Inertia. “I don’t think a lot of people feel it’s viable, because girls don’t surf ten-foot Pipeline that much. There are a few now that do it, and I imagine in the future there’ll be more, so it’s definitely something we should try to get.”

While the Surf n Sea Women’s Pipeline Pro has been the only all-female event of its kind at Pipeline in the last few decades, it’s also faced its fair share of criticism. Not least of which, it’s typically permitted to run from late March through April after the Dahui Backdoor Shootout and the Volcom Pipe Pro. Winter swells are less frequent then and the contest has often been held in head-high runners, not characteristic big, scary Pipeline. Still, the event has cultivated a groundswell of interest from female surfers who want to compete there.

To its credit, the World Surf League has hosted a showcase heat during the Billabong Pipe Master’s for the last four years called the Women’s Pipe Invitational, consisting of three-to-four female CTers and wildcards. Past competitors include Stephanie Gilmore, Tyler Wright, Tatiana Weston-Webb, Carissa Moore, Coco Ho, Courtney Conlogue, and wildcards Bethany Hamilton and Keala Kennelly and up-and-comers Alessa Quizon and Zoe McDougall. Highlights from the last few years aren’t Third Reef Pipeline to be sure. But, the 2014 event was a veritable tube fest, as was 2015. Carissa Moore dominated both. And past years on the men’s side have been similarly plagued with small surf.

Of the women we reached out to for this story, there was resounding interest in finishing the women’s CT at Pipe in tandem with the men. Caroline Marks told us, “It would push all of the girls a lot.” And Tatiana Weston-Webb said, “I would love it.”

All told, seven of the 17 women currently on tour (more than 40 percent) have either competed at Pipeline in the past or expressed interest to us in doing so.

Bianca Valenti, who’s competed at the Surf n Sea Women’s Pipeline Pro went so far as to say all events, Pipe included, should have men’s and women’s divisions. “Public resources are for everyone to enjoy!” she said. And Keala Kennelly told us that absolutely there should be a women’s Pipe Masters, and at 40 she’d love if she got thrown a wildcard.

The World Surf League did not respond to multiple requests for comment, so the underlying reason for the women’s Championship Tour not concluding at Pipeline alongside the men’s CT remains elusive. But, clearly the surfers are interested in it.

That there is a Pipe Invitational at all during the Pipe Masters shows self-awareness from the League. But it still falls short of equal representation and providing the exposure that could further elevate women’s surfing.

Depolito thinks that an investment on the part of the WSL and a presenting sponsor of a women’s CT event at Pipe is the exact move that would cultivate a pool of talented female surfers seeking to push their barrel riding to new heights. “If you build it, they will come,” she said.

Rochelle Ballard agrees. She said that if the women on tour were told that Pipe was going to be added to the schedule, say, two years in advance, it’d give them ample time to train and allow those who’ve never surfed Pipe to build their confidence.

“It takes a lot of practice time at Pipe and Backdoor to learn how to surf it,” Ballard told The Inertia. “It’s a very powerful and dangerous wave, with great consequences, whether it’s small or big… There’s a strong pool of talent on the tour now and the majority of the women have the ability to drop in and ride the barrel. Really, they need to put their time in, like every Pipe surfer that has ever (gotten good at that) wave. There’s a great deal of support for the women today and I feel like it will take some good strong coaching on approach and technique to perform physically and mentally there.” 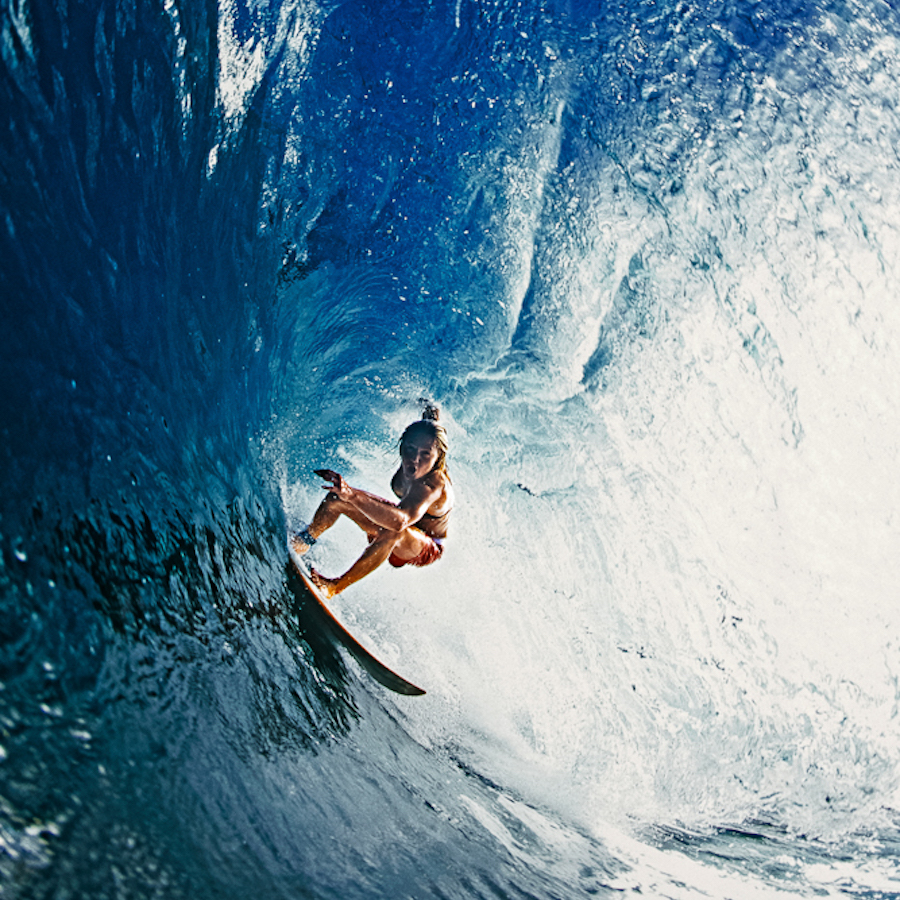 Indeed, the “build it and they will come” argument is the same many have made about the WSL’s expansion of the Women’s Big Wave Tour – that continued investment will grow the sport. And certainly, a women’s event on the North Shore in December when thousands of cameras are pointed at the surf – as opposed to over on Maui with less fanfare – would have all sorts of intangible benefits for women’s surfing that are difficult to quantify. And the question remains: if the Women’s Pipe Invitational already exists, why not just transform it into a full-fledged event?

In the immediate wake of Blue Crush‘s popularity in the early 2000s, Rochelle Ballard spoke to Outside magazine about the irony that a film about female empowerment in surfing had to build a plot around a contest that doesn’t exist – proof the film was way ahead of its time.

“Maybe it is more of a dream than a reality for girls to be able to surf in the Pipeline Masters,” she said then. “But someday that dream will come true. I can’t stop pushing until it does.”

While strides have certainly been made, sixteen years later, the idea of a women’s Pipe Masters is still just that: a pipe dream.