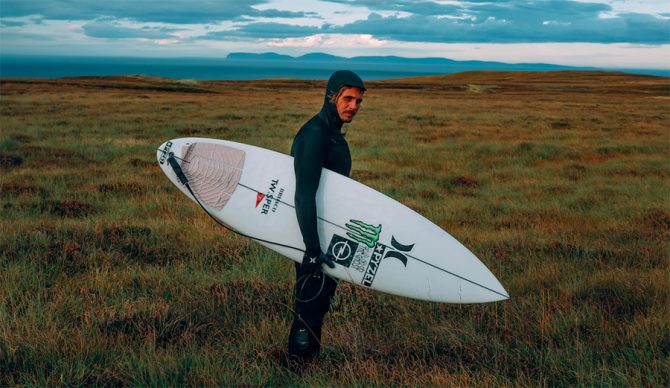 “I’ve had some bombs over the years, but I’ve never felt like I’ve put everything into a whole day,” Nic von Rupp told me recently. “To go full throttle, from sunrise to sundown on one of the biggest days ever at Nazaré, was a huge step for me. This felt different. This was different.”

Von Rupp was referring to January 8, 2022 at Nazaré. It was a day full of carnage; Justine Dupont skipped out on a monster and after going over the falls said afterwards it was her closest experience to death. CJ Macias tombstoned at the peak of a giant teepee and was lucky to survive with just a broken arm and blown eardrum.

Von Rupp, though, was a steely, calm, presence in the lineup. With his partner Pedro Scooby he surfed a dozen waves and they were the only team to return to the harbor unscathed. If his surfing and big-wave career has been a J-curve, that day represented another giant leap forward for the Portuguese surfer who’s quietly become one of the best in the world in big waves.

Even if von Rupp were to retire now, unlikely given he’s just 31, he could look back with pride on what has already been a phenomenal surfing career. Born in Portugal’s hill-strewn coastal capital city, Lisbon, to a German father and Swiss mother, which helps explain his fluency in five languages, his teenage years were spent chasing success in the competitive realm, rather than the big-wave scene.

In 2007 he finished runner-up on the European Pro junior circuit to qualify for the World Junior Championships in 2008, where he ended fifth. Following those results, he spent a few years on the QS with some success. However, under the mentorship of Joao de Macedo, he was increasingly drawn to the heavy-water slabs both near home, and further abroad.

By the time he was 20, he’d started heading down the freesurfing route. He filmed his slab riding and exotic trips to Indonesia, Tahiti, Hawaii, and Africa in a series of well-produced web series. Photogenic, hard-working, and not afraid to use budget to produce quality footage, it’s not surprising his clips were some of the most popular in the genre. Europe had never really had a real standout freesurfing star, and with command of English, von Rupp quickly developed a global following. 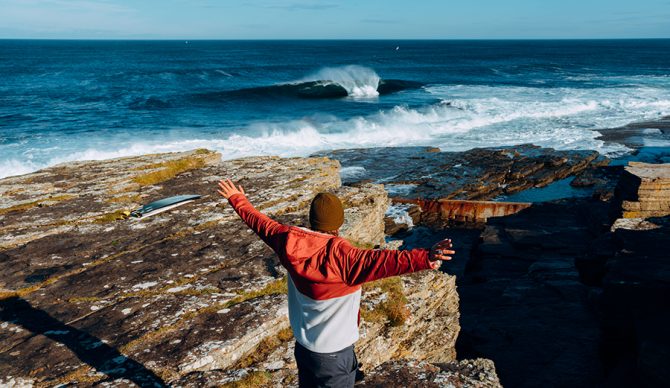 Von Rupp has made a name for himself in slabs like these. Photo: Kenneth Kemp

Highlight reels of epic sessions at Kandui and Nias kept those fans sated, but as he progressed his thirst for bigger waves grew. Some four years ago his surfing at the world’s heaviest waves such as Mullaghmore, Maverick’s, Jaws, and Puerto Escondido was supplemented by an increasing commitment to Nazaré, located just an hour from his home.

“I’m really proud of Nic, because he didn’t rush it at Nazare,” says Portuguese OG Macedo, the man who chaperoned von Rupp into the big-wave world. “He didn’t try and prove himself or announce that this was a new direction, or a new career. He did it the way you should; with the respect for the place, and incrementally. Now he’s a real force.”

“For me, from the very start at Nazaré it wasn’t about riding the biggest waves,” said von Rupp. “I’m not out there 100 percent obsessed to catch the bomb of the day. It’s more channelling my energy and focus into catching as many good waves as I can.”

The handsome von Rupp’s humility is always on display, whether in person, on video, or on his social channels. He just doesn’t take himself too seriously. In one partnership post on his Instagram page, he deadpans into the camera, “My name is Nic von Rupp, and I’m a professional big-wave surfer,” without cracking a smile. “During the winter I’m 100 percent committed to riding the biggest waves in the world. Nothing else matters besides riding that one huge wave.” Before cracking a smile, “But in the summertime,” he says, “I’m an amateur gardener.” This fun personality makes him an excellent, if not underrated, pitchman.

But von Rupp has earned everything he’s getting these days. Through diligence and patience, he’s ascended into the top realm of Praia do Norte performers. He cites Kai Lenny and Lucas Chumbo Chianca as the pair that have set the bar the highest in terms of high-performance in big waves. And after his and Scooby’s efforts in the recent Tow Challenge and in the latest January session, he believes they’re currently the closest to giving that pair a run for their money.

“Nazaré is scary and intense, and lot of really good surfers crack under that pressure,” continued Macedo. “Nic’s done the opposite. You can see the joy he has for all the aspects of the process that you need to commit to thrive there.”

As von Rupp has matured, he’s also started to take on the mentor role that Macedo had performed for him. When he started his own surf wear brand Brusco, his first signing was Miguel Blanco. From nearby Ericeira, and five years younger, von Rupp has taken the charger under his wing. Von Rupp’s educated him at one infamous left slab near home, and more recently towed Blanco for his first session at Nazaré

“Nic is a surfer to his bones, and he respects and appreciates the ocean. He’s not trying to be a hero, he’s just gaining his experience,” Blanco told The Inertia. “There’s a lot of people in Nazaré who are chasing something, chasing a dream, and there’s a lot of inexperience in the water and that’s when shit goes down. So there’s no better person to start surfing there with. Even if I have to tell him to just calm the fuck down half of the time.”

Von Rupp’s froth levels are legendary, hence the name he gave to his highly successful vlog. In the last big swell, De Macedo recalled how Nic was buzzing past him, incessantly trying to coax him into the inside double-ups. Blanco too says their friendship is based on their differing, but complementary personalities. “I always tell Nic to chill out, but he’s such a strong character,” says Blanco. “He’s always so psycho and so on. I’m more mellow, so together we balance out. It works.”

That perfect mix of psycho and patience has seen von Rupp translate his generational slab riding talent into the vast, open-ocean realm of Nazaré. It’s been a slow, but successful process, and one that looks to have a long, long way to go.

“Nazaré is so gnarly, you are constantly readying yourself for the worst-case scenario. You’re expecting someone to die, and that feeling never stops all day,” says von Rupp. “Yet so much preparation and work have gone into each session that you have to make it pay. On that last swell that’s what we did. We didn’t crash, no one got hurt, and we scored some of the biggest and best waves of our lives. Now we wait, train, and get ready to go again.”