How Stacy Peralta, the VCR, and Skateboarding Videos Changed the Way We Look at Action Sports 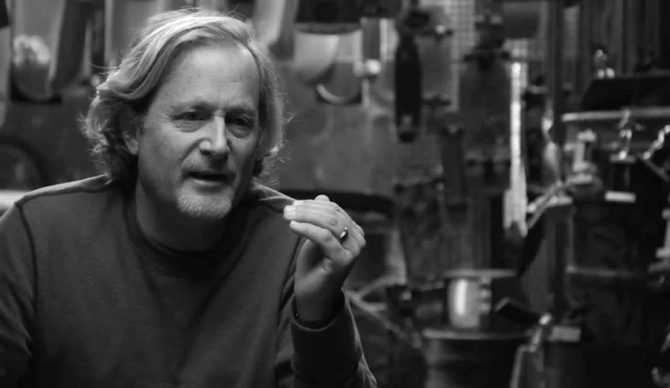 With his award-winning films and willingness to experiment, Stacy Peralta changed the way we watched action sports. Photo: Screenshot from Bones Brigade interview

Former world skateboard champion Stacy Peralta did not set out to change the world. The year was 1983, and as both the famous face and creative marketing force at Powell-Peralta Skateboards it fell to him to figure out new ways to engage the period’s growing legion of potential young customers.

“We’d taken magazine print ads about as far as we could,” says Peralta, today a successful documentary and commercial director. “While at the same time we were reading about the explosive boom in VCR sales, not just commercially, but how something like 70 percent of all U.S. homes already had VCRs. With no other new direction presenting itself, I figured the living room was the only place to go.”

Peralta’s was a good read on the state of the art. Although the period’s skateboard magazines flourished, skateboarders who wanted to see footage, not merely photos, of their rapidly evolving sport had depressingly few options. In the previous decade groundbreaking skateboard action had once been a popular feature in a number of mid-70s, 16mm surf films. Hal Jepson’s Super Session, with its skate segment shot at the blacktop banks of various elementary schools in Brentwood and Pacific Palisades, was the first to highlight the potential of the newly developed urethane wheel. The next year MacGillivray/Freeman’s Magic Rolling Board, an additional “story” added to the latest cut of their hit surf doc Five Summer Stories in 1976, offered a slick, cinematically sophisticated look at the fledgling sport. Yet not only were these segments obsolete by the early eighties, they mostly depicted surfers riding skateboards and were hardly a reflection of what had developed into a fully formed skateboard culture.

But at least surfers had surf movies, and could still pack veterans halls and high school auditoriums for re-reruns of 16mm films like Free Ride, Tubular Swells and Fantasea. Skateboarders, on the other hand, had nothing to watch, with even execrable Hollywood attempts like Freewheelin’ (1976) and Skateboard: The Movie (1978) just a distant memory.

It was about this time that Peralta, who, having provided four-wheeled stunt work on a number of film and television productions and was already acquainted with the film world, started thinking DIY.

“There was a real confluence of technology and influences,” says Peralta. “As the price of video recorders came down, this was the first time that someone like me could buy an affordable camera, 3/4-inch deck and editing system and produce a movie out of their house.”

The growth in sales of home videocassette recorders was another indication of a significant sea change, not only for movie viewing, but also for the marketing of those movies.

“Previously, surf films were made by filmmakers,” explains Peralta. “No companies had their own film divisions. They couldn’t afford to shoot on film, and forget about even a limited theatrical release. But shooting a movie on tape, featuring all our top team guys, intended to be watched on a video cassette recorder, say, in a skate shop…that I figured we could do.”

If Peralta saw in the VHS/VCR combination a chance to take control of his company’s branding, it wasn’t evident in his confidence of the finished product’s potential. Yet when Peralta next hit the road to service dealers, his station wagon was piled high with The Bones Brigade Video Show tapes.

“We dropped them off to any shop who had a VCR,” recalls Peralta. “And I figured if we sold at least 50 it could be a sign that video had potential. Instead, by the end of the year we’d sold 30,000.”

Peralta’s roll of the dice paid off almost immediately: young skaters, not sitting in theaters slurping Icees and tossing Milk Duds but jostling shoulder to shoulder around their living room TVs, couldn’t get enough of this new medium.

“We heard about kids literally wearing the VHS tapes out,” remembers Peralta. “By that time George [Powell] had already come to me and said, “Start another one immediately!”

And he did. But while surprised and encouraged by this initial success, Peralta could not have known what a huge pebble he was dropping into the pond. As it turned out, The Bones Brigade Video Show, the very first straight-to-video action sports movie, changed not only the way action sports are marketed and consumed, but would eventually alter the evolution of the activities themselves.

“Almost immediately every action sport company created a film division,” says Peralta. “I think they saw how this gave us the ability to curate our own talent. We didn’t need the magazines anymore. We had control now.”

Straight-to-video quickly became the action sports standard, with surf companies, especially, following in the Bones Brigade’s wake. VHS offerings like Quiksilver’s The Performers and Astrodek’s Wave Warriors series hewed closely to Peralta’s template of producing segments that highlighted individual athletes, letting the aggregate define the cutting edge rather than any broader overriding statement. In the skate world, productions like H-Street’s Shackle Me Not (1988) and Hokus Pokus (1989) took a vérité, no-statement statement to a messy point of perfection, channeling the sport’s anti-establishment aesthetic into a veritable video middle finger, while at the same time graphically, albeit crudely, portraying the sharp end of the performance scale. What these and other “action sports” videos were exploiting was a medium that not only offered more immediate perspective on the sport, but a completely new way to absorb the imagery.

“The remote control became the death of linear storytelling,” wrote Craig Stecyk, Stacy Peralta’s creative partner on a number of the Bones Brigade videos. “Replacing it with random access viewing, where you can stop, fast forward or rewind on a whim.”

Putting the power into the viewer’s hand came at a price, however.

“There has been a dark side to all of this,” says Peralta, whose subsequent, and more sophisticated, productions like the wildly popular Search For Animal Chin and Public Domain belied a trend he saw as detrimental to the art form.  “Eventually the videos ended up being about nothing. Quality didn’t matter. No storyline, no character, nothing but maneuvers. They’d become trick inventories. Which is great for progressing the sport. But we’ve sort of hacked performance evolution, speeding it up by athletes focusing on learning a particular big move specifically for a shot in a video.”

Prime example was filmmaker Taylor Steele’s 1992 surf video Momentum, which reflected a minimalist yet highly-impactful approach, cutting each top performer’s section to the length of a particular punk song, while focusing not on complete rides but individual maneuvers. Much like with skate, snowboarding, mountain biking and freestyle motocross videos, viewers, remote in hand, could watch a maneuver or trick countless times, winnowing performance standards to a single peak moment. Taking the entire act, and making it all about The Move. Great action—not-so-great movie-making.

Naturally, the pendulum eventually swung back the other way. Peralta’s feature documentaries Dogtown and Z-Boys (2001) and Riding Giants (2004) were not only critical and commercial hits, but with their character-driven narratives, helped usher in a new era of more refined action sports storytelling. The later advent of online streaming services like YouTube and Vimeo, along with the proliferation of relatively inexpensive digital cameras, has served to provide both the means and a platform for filmmakers of every stamp, democratizing an outlet of expression that was once solely the realm of the corporate sponsored, helping to foster creativity and style beyond the context of a marketing campaign. Today, it seems, just about anybody can make a movie, and just about everybody does.

One thing hasn’t changed, however, and that’s where these films are primarily being watched; Stacy Peralta made that call back in 1983, and it was the right one. Whether it’s full length skate films like Van’s Alright, Ok, Red Bull Media House’s climbing series Reel Rock, Travis Rice’s snowboarding epic The Art of Flight, Jamie O’Brien’s popular Who Is J.O.B surf vlog, or even just the latest YouTube clip, action sports are in our living rooms to stay. All thanks to the VCR, the VHS…and The Bones Brigade Video Show.

Editor’s Note: For a collection of longer reads by Sam George go to samgeorgeworld.substack.com