How Would I React to a Great White Shark Encounter? Now I Know 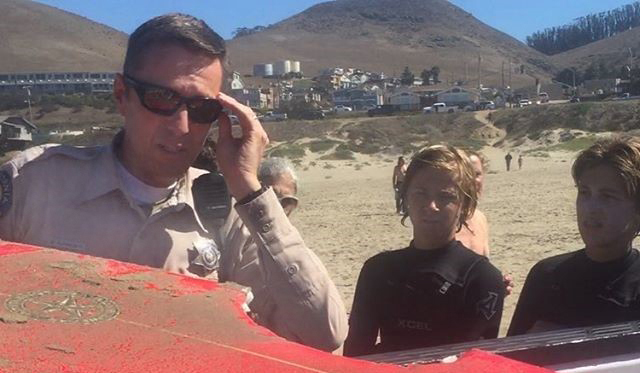 A Ranger inspects the aftermath of a great white encounter. Photo: Pemberton

The funny thing is, I’d commented earlier on the unusually clear water. “I like when it’s clear like this; I can see things,” I’d said out loud

Fast forward an hour: My friend Nadine, sitting in the lineup, looked into that unusually clear water, quickly twisted around and said, “Whoa – there’s something down there!”

The first thing I saw, under me and to my right, was a large shadowy mass. Which isn’t unusual, right? Often, it’s a clump of sea plants that freaks you out. But then, as clear as day, I saw it.

Every surfer has peered into the water and wondered what might be lurking beneath. The boogeyman under the bed – the thing you never want to see – is a great white shark.

It was about six feet in front of my board, maybe four feet under, and what caught my attention most was the large tail fin, which provided thrust by moving side to side.

When I saw that, I blurted, “Oh, fuck!” which pretty much alerted everyone around me that this sess was over.

As it turns out, this was my fourth shark encounter, each one progressively scarier. And each gave me interesting insight, or further self-study, into my reactions when coming into contact with these scary creatures. It’s not an insight everyone is lucky enough to get. If you’d call it luck. 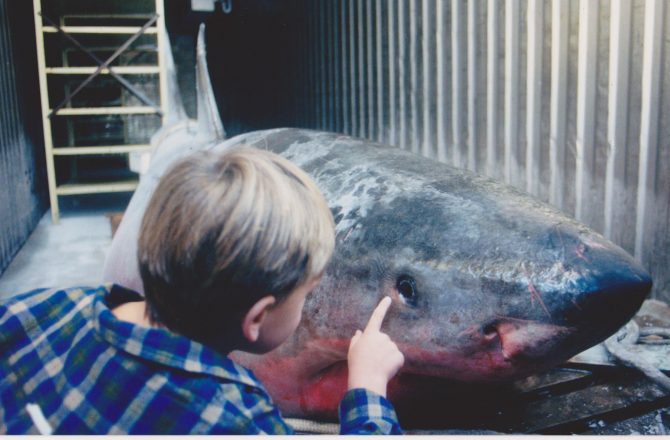 Before I even began surfing, I once reached out and touched a 16-foot great white. Contrary to everything I had read, the skin of this imposing leviathan felt like ice, actually.

A fisherman working off the coast of Morro Bay accidentally caught the adolescent in a gill net, where it experienced an unspectacular death. And after the fisherman agreed to sell it for $700 to the Pelagic Shark Research Foundation, he stored it in a large freezer and invited the public to check out his 1,700-pound catch.

As I waited in line, I took a quick shot of a little boy poking it and thought, “Nope – I ain’t ever going in the water.”

And yet I let someone talk me into getting in the ocean the following summer. I’d just covered a death penalty murder trial and needed to do something to lighten my mood.

Thus began a love affair with the ocean that many of you have had as well. For the first 13 years of my surfing, I had no shark encounters. But then I was at Atascadero Beach (“A-Beach”) in Morro Bay, sitting on my board when I saw a large triangular fin about 50 yards away.

I didn’t want to be the kook who cries wolf when he sees a dolphin fin, so I didn’t say anything as the triangle slowly sliced under water. And then I saw it again, gliding across the surface before the oncoming waves obscured my view.

“What?” my friend Dan said. “Did you see something?”

We always want it to be a dolphin, and it usually is. But the creature showed itself again, and my friend Steve offered his take: “Oh, yeah – that’s a shark.”

We rapidly exchanged one another’s take on the shark’s characteristics – after hauling ass to shore – and I did some research before concluding it was likely a harmless basking shark. Then, in confirmation, I found a YouTube video showing basking sharks in Morro Bay that week.

I felt better about the ocean. 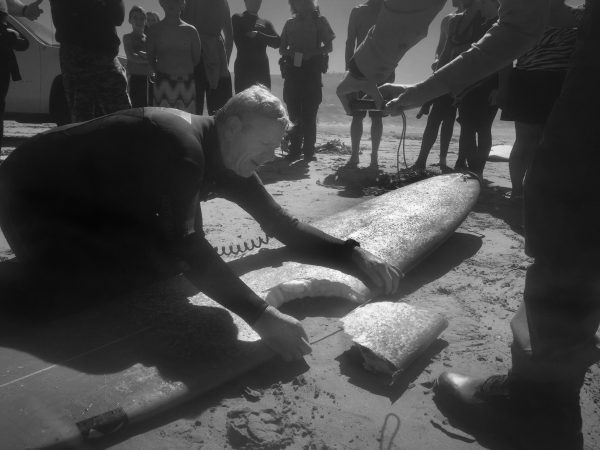 My friend Nick and I had just gotten out of the water at A-Beach and were beginning to un-suit when we noticed a large crowd gathering at the water’s edge. Soon every surfer was out of the water.

“I’ve never seen that before,” I said.

“You’re a reporter,” Nick said. “You should find out what it is.”

“Eh,” I said. “Somebody probably saw a dolphin.”

Besides, I was off the clock.

Then a kid ran up to a nearby campground kiosk and said, “Some lady’s board just got chomped by a shark!”

I grabbed my GoPro and iPhone and rushed to the beach, where I saw a park ranger taking photos of the board while someone with a wetsuit held a tape measure over a huge gap. Turned out the guy with the tape measure was my friend Jay. And the photos I took of him wound up running in publications worldwide.

It didn’t make him famous, but it could be worth a line in his obituary someday.

The surfer, Elinor Dempsey, eventually returned to the surf, but not at A-Beach. Had she been lying on the board instead of sitting, that shark, estimated at 11- to 12-feet, would have ended more than her A-Beach sessions. 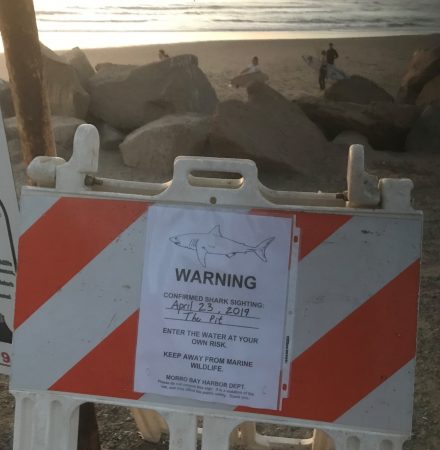 After surfing near Morro Rock, we saw an ominous “shark warning” sign. We chuckled about it, then didn’t even mention it next time we headed to nearby A-Beach a little more than a week later (yes, I realize there’s a trend here, you know where I surf).

As I mentioned earlier, I’ve had the good (or bad, depending on your viewpoint) fortune of being able to examine my reactions when coming in contact with sharks. But I’m sure every surfer has wondered what would happen if they ever saw a great white in the water. Two questions that I’d find the answers to always stood out when I pondered possible encounters after first seeing that frozen shark caught in the net all those years before:

The first was would I have the presence of mind to get some photos with my GoPro or any other device?

Even though I have a gazillion surfing selfies, I force myself to bring my GoPro – in case something unusual happens. I’m no longer a reporter, but chronicling events is still in my blood.

But now I know the answer:

When the possibility of dying enters the equation, it turns out, my commitment to chronicling this life ends.

This is why I never became a war reporter.

The second is fundamental – if I were lucky enough to catch a wave in, would I ride on my belly and, hence, have more body exposed for a dedicated shark to chomp, or would I try to pop up, risking a panicked wipeout that would send me into the drink like a bucket of chum?

Mercifully, a wave came within a minute or two of my most recent sighting this month. Needless to say, I was never happier to see a 3-foot roller. As I took off, another harried surfer nearly crashed into me. Yet, as the wave shoved me forward, I decided I wanted to be as inaccessible as possible, popping to my feet. And if I wiped out, it was my fault for not being a better surfer.

Turns out, only Nadine and I saw the shark. And when people onshore asked how big it was, I realized how hard it is to measure these things in your head (and in the moment).

It was under water. I was scared. It all happened so quickly.

In a criminal case, I’d be the eyewitness that causes detectives to flip chairs in disgust.

I’m pretty sure it was at least as big as a longboard, so I went with ten foot. Despite my escape, I was pretty rattled the entire day. And when I woke up the next morning, I did what any surfer does after a scary encounter with an apex predator.

I went surfing. At my new favorite spot: Pismo Beach.

Editor’s Note: Pat Pemberton was a reporter with The Tribune in San Luis Obispo, California for 17 years. To see more enlightened views from experts on shark encounters check out our profiles on Kimi Werner, Ocean Ramsey, as well as conversations with shark expert Chris Lowe.