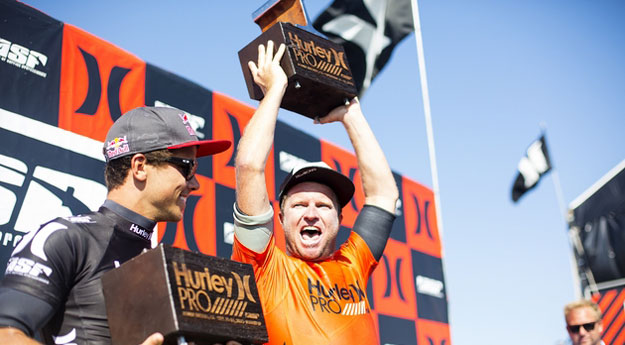 Well, it’s in the bag. The 2013 Hurley Pro at Trestles ran its final heat today in waist-high waves with that wind-tousled look that models lounging on Ferraris lust after.

It was a great final though, filled with high-scoring exchanges and screaming fans. Well, appreciative fans, anyways. In the end, Taj Burrow bested Julian Wilson in a pretty damn good battle of the Australians. This is Burrow’s third Final at Lowers – two of which were runner-up finishes. But after all the contest stuff was done and the heat scores had been tallied, I was left with my own tally: The Hurley Pro Final Day: By the Numbers.

1: Number of times Taj Burrow won. Finally! I had a conversation with a kindly flip-flop merchant about the final. “Who you like for the final?” he asked. “I want Taj, but it’ll probably go to Julian,” was my response. He looked up at me, pushing his hat back on his head. “What, no faith in the old guard?”
Well, flip-flop merchant, my faith has been restored.

2: Jordy Smith’s number of fist pumps on one tiny, mushy wave. Of course, he’s a fantastic surfer. And strong! Legs like trees! If could surf like Jordy, I’d be a happy man. When he does squats, he doesn’t push the weight up, he pushes the world down. But for him to double-claim on one small wave seemed odd. For someone that gets to surf the best waves on the planet (which Lowers was most definitely not today), you’d think he’d need a little more excitement to get so excited. Maybe I just don’t understand competitiveness. I’m so Dane-ish. You should see my shirt. It has childish drawings on it, and it’s mistaken for fashion.

890,000: Number of black Hurley umbrellas scattered around the beach. I think Hurley’s marketing people have decided to advertise to aliens. They gave anyone and everyone black sun-umbrellas, which was pretty cool – if only it weren’t such an obvious branding ploy. But whatever. It’s free shit. If someone were to take a satellite image of Lower Trestles today, it would look like a giant  garbage bag covered in Hurley symbols.

64: People in the lunch line up. Honestly, this is the only one of these that I actually spent more than two seconds counting. And I’m not even sure if this number’s accurate, because everyone was shifting around so much, trying to see out from under their oversized flat brim hats.

5: Times I walked in on someone in the porta-potties. You’d think, at a public function, people would use the lock mechanism, especially when that’s the thing that lets others know not to burst into a very small space that’s full of another man peeing. But not at the Hurley Pro at Trestles – oh no. Over the course of the contest, I surprised too many peeing men. And to the one guy with the door wide open: You peed on your foot, and I saw it.

2: Vehicles stuck in the sand. Here’s a secret: you can’t drive a car or a bus into deep, soft sand. Don’t tell your friends. The first day I got there, there was a shuttle bus buried up to its axles in the sand, just off the hard pack. Still not sure how that happened. The only partial explanation was overheard from who I assumed was the driver: “It’s stuck.” Yup. Then this morning on my way down, I was pleasantly surprised (what a jerk!) to see another poor unfortunate had the misfortune of turning right on a straight stretch and sinking like Artax in the Swamps of Sadness. Whoops.