I Channeled My Inner Italo Ferreira and Surfed in Jorts 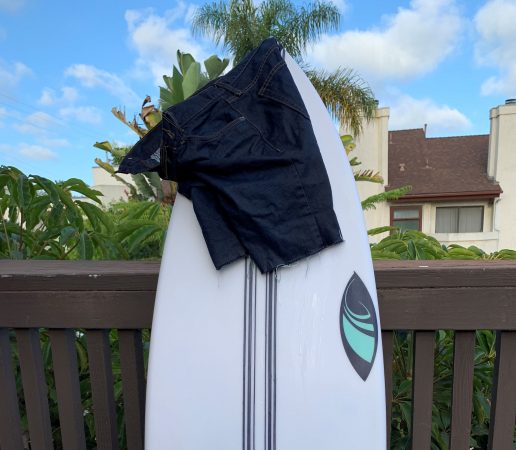 The jortalution will not be televised. Photo: Nauman

It took Italo Ferreira roughly ten minutes to simultaneously make history and spark a revolution. After enduring what was essentially a Hollywood film plot on his way to Japan for the ISA World Surfing Games, he arrived just in time to snatch fellow Brazillian Felipe Toledo’s board, paddle out, and win the heat (and then later the whole contest, because that’s how showbiz works, baby). He was immediately mobbed on the beach and, I assume, hoisted onto a few shoulders and transported to a bar while “Eye of the Tiger” played in the background. And he did it all in jean shorts.

On the list of men’s fashion faux pas, jean shorts are nestled somewhere between Crocs and wearing socks with sandals in their level of offensiveness. Denim, while perfectly acceptable in the full-length variety, draws the ire of many when it stops around the knee. The same rule strangely does not apply to the shorts’ upper torso cousin, the vest – which I assume has something to do with Bruce Springsteen.

But an inspirational moment like Ferreira’s can be a catalyst for change. Seeing someone of Italo’s ilk pull off such a feat in jorts placed the short denim pants on full display. Here was a man in jean shorts doing amazing things on a surfboard and getting showered with adulation. This was not just a victory for Brazil and Italo, but for jorts enthusiasts around the world.

Perhaps it is time we tear down our preconceived notions of what qualifies as proper men’s surf attire and try something radically different. Maybe this is the start of a new era where surfers chuck innovative maneuvers clad in denim. I was eager to be a part of the burgeoning Jorts Revolution. It would be my very own Momentum Generation, but with less Jack Johnson and more Kid Rock. The Jorts Jeneration.

So, I decided to try surfing in jorts.

Let’s first address the question on everyone’s mind: do I own a pair of jean shorts? Dear reader, I do not. This is the biggest difference between Italo and myself. Well, that and he is one of the best surfers on the planet while I have the style and grace of a whiskey-fueled kangaroo on roller skates. But, through some minor surgery to an old pair of jeans, I was able to fashion myself a new pair of jorts. 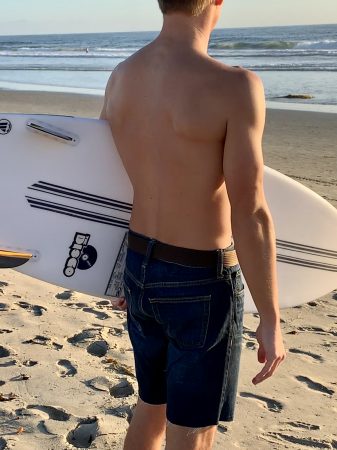 Photo of author courtesy of author. Not pictured: all the ladies swooning over my new outfit.

My anxiety ratcheted up twenty-seven notches as I got to my local break. There were a half dozen faces I noticed out in the lineup. How would they respond to my new fashion choice? Would they still accept me and appreciate that I tried something new? Or would their ruthlessness take hold and burden me with nicknames like “Jort Jort Florence” and “Jorty Smith” for the rest of my life? I pushed these negative thoughts aside and began to paddle out. No one said revolution would be easy.

That’s when the looks started. Seasoned locals stared. Beginners clinging to their foamboards stared. In the distance, the lifeguards stared, confident that some guy who looks like he had never seen a beach before would definitely need rescuing.

But no one said a word. Maybe they knew about Italo’s accomplishments and respected me for trying to further the legacy of the jort. Or, more likely, they thought I was a kook and had already brought enough embarrassment upon myself. Regardless, the Jorts Revolution was underway.

This was not just a victory for Brazil and Italo, but for jorts enthusiasts around the world.

Once I got into the lineup, I glanced down at my board: the jorts had bled all over the wax and rails, turning them completely blue. It should be noted that these were top of the line designer jeans from a French fashion mogul named “Olde Nàvy.” The expensive cotton twill fabric made from ultra-rare Norweigan Blue Sheep was clearly not meant to be exposed to water. This is a minor issue that will undoubtedly be improved upon as this movement gains more momentum. 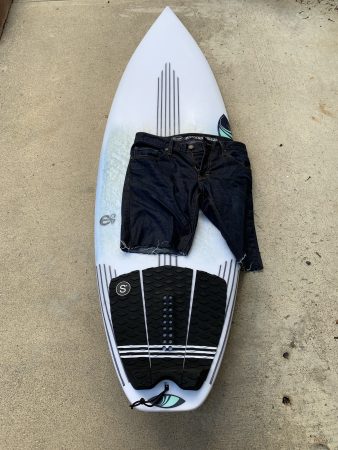 I would like to tell you that this new fashion trend gave me the ability to go faster, boost higher, and turn harder. But it sadly does not. Instead, I felt heavy and sluggish from the waterlogged denim. I could still surf to the full extent of my average abilities, but it took a little extra push to get me there. It was like I had just consumed two California burritos, with one going directly to each thigh.

Throughout the session, I noticed a lot of tension around my crotch and thighs. Unlike boardshorts, jorts do not stretch in the water. At all. This was a major concern for me, since I have had prior experiences with boardshorts of supposed quality ripping at the seam and exposing my ass to the majority of America’s Finest City. Maybe if I had some top of the line Tech Boardjorts (Olde Nàvy Phantoms), I could have crouched lower and felt nothing. But, alas, I am a man of meager means and must make do with the boardjorts I have.

Were my new jean shorts able to aerodynamically contour to my legs, making it easier to twist through an air reverse? I have no idea. I can’t pull off an air reverse to save my life. But the jorts filled me with the artificial confidence I needed to think that maybe I could pull one off.

The session was poor overall. Whether that was due to my fashion choice, ability level, or the two-foot surf getting shred apart by onshore winds is up for debate. Maybe this was Poseidon’s way of telling me jorts were not meant to be surfed in.

While Italo was greeted post-heat by adoring countrymen eager to pile on him for his great accomplishments in both sport and fashion, I was met by confused stares. Tourists and locals alike were arriving in droves to watch the sunset and they were curious about this oddly dressed man exiting the water. They started to whisper and snicker to one another.

“I guess this is how they dress in San Diego,” I overheard an older gentleman say to his wife.

“Oh my!” she responded, after giving me a look.

Denim jeans used to be a staple of the working class, and that’s what boardjorts are – a working class man’s surf short. We don’t need your fancy eighty-way stretch technology and flashy patterns, just give us some fabric to cover the undercarriage and let’s get down to business. The Jorts Jeneration is slow, ugly, and impractical, but it also rules. Don’t tell me how to dress, Mr. Standard Issue Black Wetsuit. Long live boardjorts.