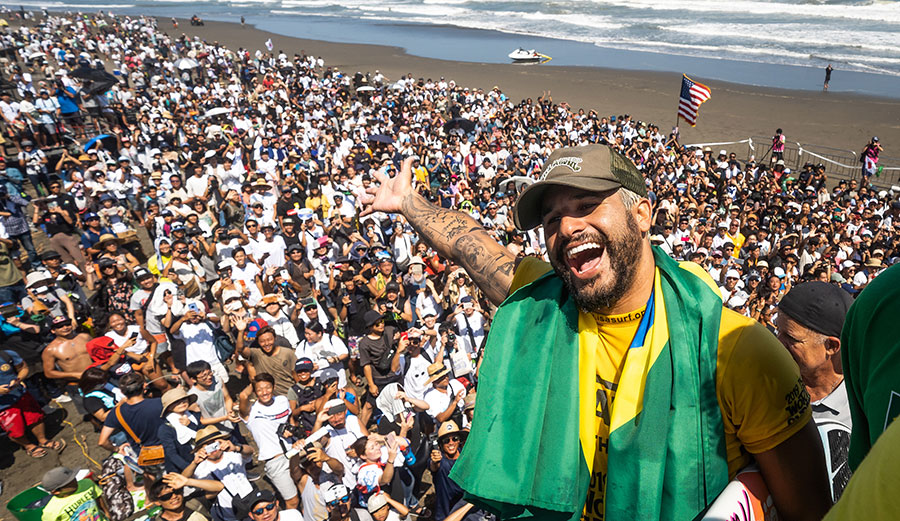 Brazil’s Italo Ferreira on top of the world after earning the Men’s Gold Medal with the highest heat total of the event. Photo: ISA / Sean Evans

If you really squeeze your eyes shut and think hard, you may recall that time that Italo Ferreira had his passport stolen, showed up late to Japan for his first heat in the ISA World Surfing Games, borrowed Filipe Toledo’s board, donned his fanciest pair of jean shorts, and won his heat. Well, not only did he win that heat, he won the whole damn thing, nabbing a 10-point ride in the final and nailing down Brazil’s first World Surfing Games medal in nearly two decades.

Let’s go back to that opening round, though, for a second, because it’s worth rehashing. The first thing you need to know about the quagmire that is Olympic qualification is that the ISA World Surfing Games is mandatory unless you’re John John Florence with his bum knee. Poor Dylan Southworth, a fresh-faced Olympic hopeful ranked 670th on the Men’s QS, had run into an unexpected stroke of luck in that first round—Ferreira had run into a roadblock of the most epic proportions.

“His passport had been stolen,” wrote our very own Juan Hernandez. “And with a quick turnaround between the ISA event in Japan and the Surf Ranch Pro immediately following back in California, he’d need a Visa to ensure he could come back to the United States. He’d been advised to leave the States, head to Japan, and schedule appointments there to secure the necessary documentation.

‘So I left the United States on September 8 and embarked for Tokyo, with an interview scheduled for the following day, 09,” Ferreira described. “It all seemed normal, but MY FLIGHT WAS DELAYED BECAUSE OF A HURRICANE – I even stayed 18 hours on the plane.'”

That meant, of course, that he missed his Visa interview, so he scheduled another one for the morning of the 10th, which just so happened to also be the same morning as his first heat. By 8:30 a.m., he had everything signed off, so he sprinted for another flight from Tokyo, hoping to make his heat—which, thankfully, had been delayed.

Southworth, meanwhile, was paddling around, catching waves at his leisure, Olympic rings shining in his eyes. Only 8 minutes remained on the clock. But wait! What’s that cloud of dust on the horizon? Is it… is it Ferreira? In jorts? Filipe handed him a board, Ferreira paddled out, and he quickly stroked into back-to-back waves that scored a 5.13 and an 8.33, winning the heat and crushing Southworth’s dreams like a cigarette butt under a boot heel.

Carry on to the final day, where Ferreira is not wearing jorts. Southworth is in the wind, probably crying into a bottle of sake somewhere, while Ferreira is finding 10-point rides (well, one, anyway, but he did it when it really counted: the final) and riding the Brazilian wave to glory.

Ferreira’s win put Team Brazil in the top spot, since his teammate, Gabriel Medina, took home bronze. Kolohe Andino, the man who tasted that yellow jersey for just a few fleeting seconds, found a silver lying in the Japanese sand, and Murakami earned copper, which I didn’t know was a thing you could win. That copper, though, means that Murakami wins Japan’s final Tokyo 2020 qualification slot.

In total, the Brazilian team had three medals: Ferreira’s gold, Medina’s bronze, and Silvana Lima’s silver in the Open Women event that finished on September 10.

“That was a super cool contest,” said Ferreira after all was said and done. “I want to congratulate every surfer and country here. I am so tired, that was a lot of heats with a lot of emotional moments. I just tried to show my best surfing.”

Organizers were ecstatic at how things panned out. The World Games served as a test, of sorts, for the 2020 Games. “Tokyo 2020 is delighted with the success of the 2019 ISA World Surfing Games in Miyazaki this week, said Tokyo 2020 Sports Director Koji Murofushi. “The event, held in this very popular surf destination in Japan, offered a glimpse of how spectacular Olympic Surfing will be next year.”

Here are the full results: