I Got to Test America’s Newest Wave Pool 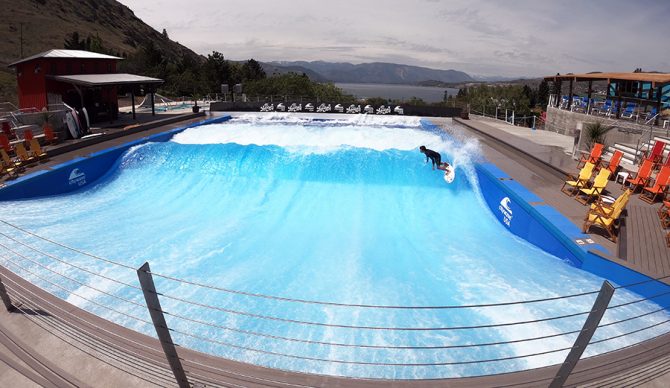 Not a bad view. Photo: JC

It’s easy to forget that Washington, with all its mountains and coastline (and Seattle) has a lot of rivers. In fact, the state is blessed with loads of water in general. And dams. Lots of dams. I was reminded of this as I made the seven-hour drive from Boise to Lake Chelan, Washington, north of Wenatchee late one evening a few weeks ago to test out America’s newest wave park.

Along the way I followed the Columbia River, easily one of North America’s most gigantic drainages, starting in the mountains of British Columbia, near the town of Golden, and culminating in the Pacific Ocean. In between it’s damned almost 20 times, the water being used for irrigation and power – salmon and fish populations, well, be damned.

It was a bit of a kamikaze mission: I received the invite from CityWave’s Cora Szabo and Jan Vogt letting me know there’d be a short window of time to test out the wave park on a Thursday. It was my only chance. Being of the media throng, I’d been invited to test out Kelly Slater’s Surf Ranch several years before. Unfortunately, the invite was during Thanksgiving. I had to pass. Watching iPhone clips of my fellow media members basking in the glow of down-the-line sprints and crouchy barrels, I vowed to never let that happen again.

So I rallied through the high-mountain desert of Idaho and Oregon, and into the agricultural belt of Washington and the Tri Cities along the Columbia River, where apple trees and grape vines and nuclear plants dot the highway in a show of man’s unlimited harvesting prowess.

I made the move to Boise several years ago after living in Southern California for more than a decade, splitting time between the Idaho city and The Inertia office in Los Angeles. Up until the pandemic, I’d gotten plenty of ocean time, storing a surfboard in the OC and riding the weird river waves in Idaho (and the wind, see kite surfing). But the pandemic changed that.

In the COVID mayhem, stuck in one place like the rest of the world, I found myself rallying late nights over to my spot on the Oregon coast to catch the abundant winter swells whenever high pressure set it, sleeping in the van just to get my fix. Needless to say, anytime I get the chance to ride something new, I’m on it like a dog licking the ice cream bowl.

The wave at Lake Chelan is at a rather iconic water park for the region (Slidewaters) and engineered by CityWave, which has been building standing waves modeled after the Eisbach river feature in Munich for two decades now. The new Chelan wave is the German company’s masterpiece thus far. It’s about 18 yards wide (53 feet), smooth under foot, and can be adjusted between playful and head high and pumping with a flick of a switch. At head high, there’s enough power to rip the board out from under you with the slightest misplaced rail. 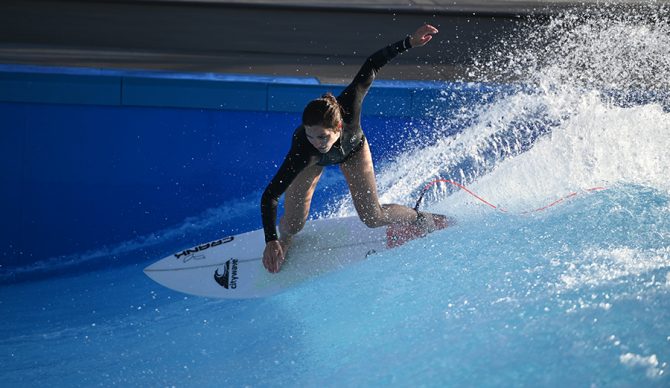 I totally scored. Cora and Jan treated me to a three-hour session where I experimented with every fin configuration I could come up with: thruster, quad, twin fin with a trailer. And not without carnage. When riding fast waves like this, small is better. I was using a five-foot grom board with a pin-ish tail that I’d purchased months before on Craigslist from a dad living in the posh, hilly enclaves on the Santa Monica side of Topanga. I pumped the rockered board to stay in the wave and felt it move. I stepped forward to try to get down into the trough and the thinly-fiberglassed stick cracked in two, sending me awkwardly into the splits (my groin, ACL, and hamstring were not harmed in the making of this rant).

For the rest of the day, I used a Firewire Baked Potato. The wide tail was not at all perfect for the steep wave but it worked well enough. The smooth face allowed for any kind of maneuver, forehand or back, and Jan, CityWave’s head engineer showed off how easy it is to get air on the thing. He surfed with snap, his quick turns in the endless pocket belied a level of experience that only someone who builds these for a living could boast. Dude ripped. 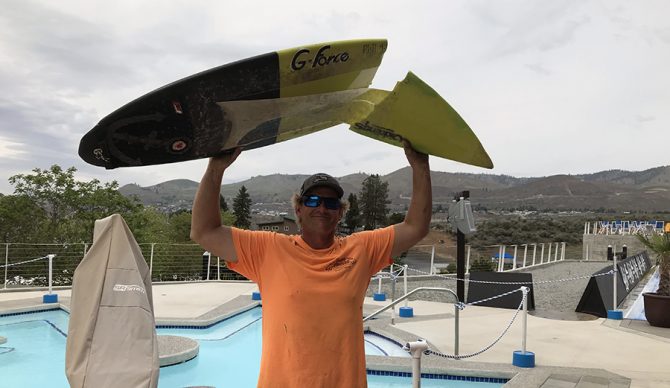 Burke, with a souvenir from the author. Photo: JC

Slidewaters park is owned by Burke and Robert Bordner (cousins). Burke told me the waterpark business has been steady but they wanted something that could bring families in, namely kids, who will try the wave and then drag the parents back over and over again. The expensive gamble will pay off. Unlike those cruise-ship waves that are shoulder dislocators, you don’t have to use a skimboard here and can utilize any type of equipment on the three-foot deep feature (fins). It’s only $35 for a 45-minute session so this isn’t a BSR or a Surf Ranch or a wave pool with exorbitant pricing. It’s a wave of the proletariat. Only 12 people are allowed per session and the park can be rented out to private posses for somewhere in the $300 range.

I definitely left some skin in the pool, two broken fins and a broken board later. There’s certainly some weird, powerful currents in there but the wave allows one to do weird, powerful things above a beautiful, crystal-clear lake in the middle of Washington. A place that’s six hours from the ocean and now boasts good surf where you’d never expect to find it.