Brioche. Meringue. Genoise. No, these aren’t secret spots in Tahiti or names for France’s undiscovered beach breaks. These accented, vowel-heavy words that require foreign keyboard strokes are some of Maui surfer Ian Walsh’s latest experiments. Swapping big wave guns for kitchen cutlery, the master of epic-sized surf has embraced the unexpected months at home, taking the time to acquaint himself with his kitchen. He admittedly a ways to go before declaring Michelin-level master chef status but Walsh’s edible antics have him dishing up seriously mouth-watering meals.

The surfer-turned-chef who typically enthralls us with rail carves and guts galore, has been indulging our feeds with eye-pleasing, crave-worthy dishes from around the world. Through his Facebook and Instagram streams (@ian.walsh), he’s invited surf fans and the bored to join him in his kitchen as he shows off his cutting board chops – good-naturedly laughing off mistakes and learning as he goes. The result? Stoking viewers’ addiction to tacos, stir fries, pizza, and pastas, that far surpass those sourdough starters we initiated going into lockdown in March.

“I’ve been on a heavy pizza kick, trying to perfect my beginner-level, at-home dough-making process for Neapolitan style pizza dough. I’ve been looking into how to make a New York style pizza dough, so kind of playing with those,”  Walsh told me regarding his current kitchen challenge. Walsh is adjusting to life with less travel, swapping plane tickets for grocery store trips. But the hobby allows him to explore the globe in a new light. “It’s about the meals I’ve experienced,” he says. “I’ve spent a good chunk of my life traveling around the world as a surfer, fortunately, and I’ve gotten to try these incredible cuisines all over the planet. If I haven’t been to Indonesia in a while, I’ll be craving Indonesian food. If I haven’t been to Europe in a while, I’ll be craving Italian, Spanish, or French food…I’m just following some of those cravings.” 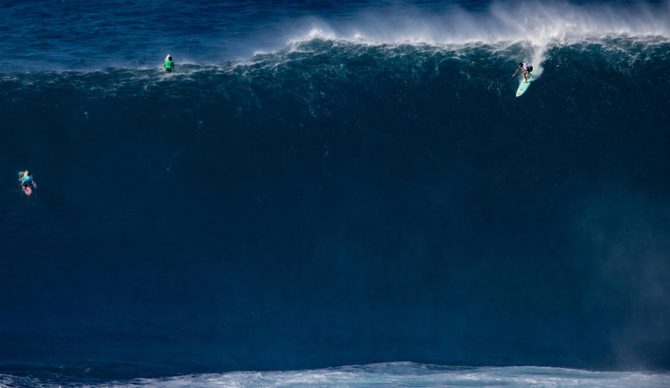 Ian Walsh can do much more than surf waves of unreasonable size. Photo: Luana Teixeira /WSL

As of late, Walsh has taken his tastes south-of-the-border, upping his Mexican street taco game. (“I love Mexican food. A lot. Breakfast, lunch, and dinner,” says Walsh, matter-of-factly.) As luck would have it, his home isle of Maui has allowed him to source a key ingredient for the sweet sauce that accompanies his signature tacos: pineapple. “One of my partners is Pau Maui Vodka, and they have a beautiful distillery here on Maui, which has a gigantic pineapple farm. I’ve been getting pineapples from them and making tacos al pastor (above). I actually cook the pineapple on the top and the bottom of the meat. It gets a lot of the flavors from the meat itself as it cooks and it gives the pineapple a bit of a char. In each taco, you add a few shavings of the pineapple. That’s definitely been a game-changer. That is an absolute must.”

And while his surf career has transported him to incredible places allowing him to dig into even-more amazing meals, his day job has made Walsh  aware of the importance of fueling his engine. “I eat really clean and healthy, lots of vegetables,” he says of his typical diet. Making it enjoyable has added to the intrigue. “That’s the fun part,” he says of tying on the apron strings and busting out the wok. “If I’m on some sort of regimen where I’m eating a little bit less carbs and more vegetables during certain training times, these meals are my time to experiment with whatever the hell I feel like eating. That’s, what’s been fun about them. It really gives me a deeper sense of appreciation for those foods.”

He’s also found a connection with an audience beyond the reaches of his typical surf fan base, an experience that has been especially meaningful for the curious and affable Walsh. “I’ve had such an incredible amount of feedback from people all over the world,” he says. “It’s a lot different than everything I’ve always shared through surfing content – you definitely get quite a bit of who I am as a person through the surf stuff and the films I’ve done with Red Bull, but this gave a unique opportunity to really share exactly who I am as a person and my deep enjoyment of learning something new, trying something for the first time, and working my way through the process with the mistakes, just letting them happen. And I think that’s really created a different perspective.”

❗️Want the best 7 piece @nwknifeworks set you’ve ever laid those eyes on & a 24-jar @thespicehouse collection that rivals the 5th-century spice trade?!? Of course, you do. ⠀⠀⠀⠀⠀⠀⠀⠀⠀ Here’s how to enter… ⠀⠀⠀⠀⠀⠀⠀⠀⠀ 1 • Like this photo 2 • Follow @nwknifeworks @ian.walsh & @thespicehouse 3 • TAG your foodie friends for extra entries. One friend per comment.⁣⁠ (each additional comment with a different friend is worth an extra entry!) ⠀⠀⠀⠀⠀⠀⠀⠀⠀ Ready? Let’s do this! ⠀⠀⠀⠀⠀⠀⠀⠀⠀ 7 Piece Knife set & Knife Block 24-Jar Essential Spices Collection ⠀⠀⠀⠀⠀⠀⠀⠀⠀ Rules: Contest ends October 12th at midnight CST. The winner will be announced Oct.13th by your’s truly via stories!⁣⁠ Please only tag your friends once.⁠ Winner must be located in the USA and at least 18 years of age. Disclaimer – This contest is not sponsored, endorsed, or administered in any way by Instagram.

He feels encouraged on this new endeavor by the many people who’ve reached out to him from kitchens and computer screens around the globe, sharing cooking tips, family recipes, and secret sauces. “Every time I post one of those videos, it’s coming in from all corners of the Earth: suggestions or tips or tricks they use their grandma taught them…It really opened my eyes to how many people have a deep-rooted interest in cooking.”

Inspired yet? Walsh is expanding his hobby beyond the boundaries of his kitchen and social feeds. He’s just launched Kitchen Captain, an addition to his YouTube channel featuring a how-to, cooking-with-Ian narrated guide to all his dishes. The ingredients list and step-by-step process is included so you know exactly what you’re getting into beforehand. But it’s really a no pressure kind of jam. The knife-wielding novice is learning right there alongside you. And the surfing chef and YouTube host, may add another title to his name: author. A recipe book may be in the works, he says.

As for the upcoming mouth-stuffing, belly-filling American Thanksgiving holiday: “I’ll be doing something big for that. And I’ll try not to burn my house down.”