In the Cut with Scott Rowley 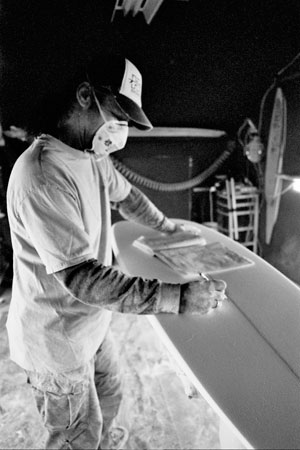 So on a rainy Tuesday morning, I dropped by the newly renovated shop. From the outside, it’s not what you’d expect. Hidden above an autobody shop, the only sign from the outside that there’s magic going on upstairs are a few haphazardly strewn, broken backed surfboards and a couple of board racks in the mud. It’s quiet. Do Not Park Here is spray-painted by hand in bright orange paint on top of muddy concrete. The stairs up to the second floor are wet and old, and a horse stands mournfully in the rain in a field just on the other side of the fence. I opened the door, and Will grinned at me over the shoulders of a couple that dropped by for a ding repair. After a quick introduction to Scott and a bit of small talk, I realized that I was not going to be able to describe my magic surfboard.

My broken surfboard is a 300 kilometer round trip drive away. “Be back by six, and we’ll sort you out,” I am told. When I return just after six with my busted old board and a case of beer, Scott looks at me, smiling. “You know the way to a shaper’s heart,” he says, opening one. We moved into back room, where he proceeded to move around the tiny foam-dust filled room, navigating around me, turning lights on and off, checking shadows, his hands grabbing for tools that he doesn’t need to look for.

Scott Rowley has quietly worked his way under the skin of Canada’s west coast surfing community. After his immigration to the Pacific Northwest, he fired up a company called Northwest Surf Design, which has since become one of the most celebrated surfboard companies from northern California up the map. If you’ve surfed in the PNW in the last twenty years, you’ve either seen or surfed on one of his boards. He’s done it without making a fuss. No one really noticed until, seemingly out of nowhere, he was a staple in our little Pacific northwestern surfing tribe.

When I asked him how he managed to become that staple, he seemed almost stumped. “It just happened, I guess. That’s what I did. I built surfboards. I worked for a few companies shaping, and then it just made sense to go into business myself.” And now, after over twenty years, you’ll be hard pressed to get in the water without seeing one of his boards underneath someone’s feet.

“It blows me away sometimes, all the boards that I’ve built that are around. There are some guys that I’ve known for twenty years, and they’re still buying boards. It’s unreal,” Scott continued, his words folding over on the edges of his Kiwi accent. “Those are the ones that have helped me get better, because it’s their feedback and their repeat business that generates a reciprocal knowledge for them and for me.”

But that knowledge and repeat business is only some of the reasons he became such a big part of the cold and grey Pacific northwestern community. He could be bigger, I think, but he’s always been a little outspoken about media coverage. Shaping, from an outsider’s perspective at least, is one of those things where maintaining a balance between making a living and not “selling out” is important. And it’s not an easy thing to do. “I’m not much a self-promoter.” Scott says. “I don’t sponsor guys, I don’t advertise… my website was done under duress because everyone was telling me I had to have one. I’m from a different generation in that respect.”

But without any kind of coverage or promotion – which, in this weird world of surfing often equates to selling out – making any decent coin is difficult. Relying solely on word of mouth and your skills, no matter how good they are, isn’t ever going to compete with pop-out manufacturer’s advertising budget. In order to make the money required to pay for advertising, shapers like Scott almost need to start popping out boards… thus becoming a sellout, whatever that means. It’s a tough one, and Scott has an interesting view on shaping machines and the boards they produce. “I think shaping machines are a valid tool for a well-established shaper with a large volume. If he can’t meet that volume himself, then yeah, get one,” he says. “But if you’re trying to get a machine to blow your business up, then you’re approaching it from the wrong direction.”

For Scott, money has never been the end goal of shaping surfboards. It’s always been a way to finance what he loves to do, a way to keep his toes constantly dipped in the surfing pool.  “It’s never been about trying to make a lot of money. It’s always been about making enough money to support the lifestyle,” he says. “You’re not going to get rich out of making surfboards. I’ve never really wanted to kill it – I’ve just always been really stoked when people buy them.” And that shows when you watch him shaping one.

While I was getting in the way in the shaping room, Scott continually asked me questions about how I surf, making small adjustments here and there depending on my answers. He was almost as excited to build me a surfboard as I was to watch him build it.  His comfort in the shaping bay is obvious; it’s where he’s doing what he does best: making jokes, laughing, and building a surfboard. He loves them, and you can tell. “I still walk into surf shops and handle the boards in there. I just love surfboards,” he tells me, sipping on his beer. “They’re just for fun. They’re like a plastic pool toy. It’s just that the pool’s bigger.”

After a few hours in the back room, my surfboard was done. And it was a thing of beauty, sitting there on the rack. I shook his dust covered hand and told him I thought it was great that he was able to create something so pretty for a living. He looked at me, his voice muffled through his dust mask, his eyes smiling above it. “I’m really lucky to do it, because that’s all I want to do, you know?”